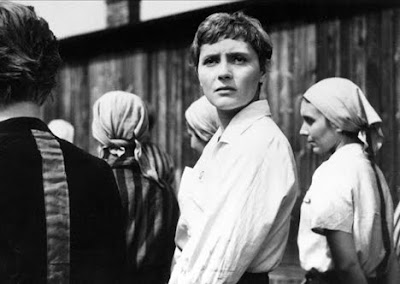 Andrzej Munk is not a name that gets knocked around much except for those cinephiles who look for the obscure and out of the way. Munk’s career was tragically short—tragic because he was killed in a car accident at the age of 40 during the filming of his sixth feature film. That film is Pasazerka (Passenger, sometimes called The Passenger). Much like Jean Renoir’s Un Partie de Campagne, what remains is a fragment, although this fragment is much longer than Renoir’s. What’s different is that Munk didn’t finish because of his death rather than simply not completing it.

In this case, what Munk had created was pieced together by others, putting as much as possible into as much a semblance of order based on the script as possible. Unfinished scenes are replaced with voiceover narration and stills, bringing to mind a film like La Jetee. The finished scenes, though, play out as Munk (evidently) intended.

The story is an unusual one. A married couple is crossing the Atlantic on an ocean liner. The woman, a German, is returning to Germany for the first time since World War II. She catches a glimpse of another passenger, and this triggers something in her, causing a host of memories to flood her. We soon learn that she was, by early 1940’s standards, a good German citizen. By this I mean that she worked for the SS and helped run Auschwitz. The passenger who she sees triggers her memory because this passenger looks exactly like one of her prisoners from a decade and a half previous.

What follows is two versions of the prison guard Liza (Aleksandra Slaska) and prisoner Marta (Anna Ciepielewska). In the first version, Liza (pronounced LEE-za) tells her husband about her experience in the camp and her experience with Marta. This is a rose-colored-glasses version. We learn that Marta’s fiancé Tadeusz (Marek Walczewski) is also at Auschwitz, and Liza arranges for the two to be together, if only temporarily. Eventually, Marta gets ill and is taken to the infirmary, where the care for political prisoners like her is sketchy at best. Eventually, Liza is transferred back to Berlin and the heart of the Reich and she assumes that Marta is killed like so many of the others. In this version of the story, Liza is extremely kind to herself, claiming not to know the main purpose of the camp until much later, and claims to be appalled by it.

The second version occurs almost exclusively inside Liza’s head, and because of this, feels like the much more trustworthy version of the story. Here, Liza is engaged in a titanic struggle, an epic battle of wits between her and Marta for some measure of supremacy in which Marta seems to continually have the upper hand. In this version, Liza is vindictive and cruel, but spends a great deal of the defensive, trying to counteract Marta rather than attacking where she can. This develops into an extremely interesting game of mental and emotion cat and mouse.

And then, sadly, the film ends just as suddenly as it began. We’re told by the narrator that there is no real way to know what Munk wanted to do with the film and that we will have to be okay with having this fragment to speak for the film.

Due to its fragmentary nature, it’s almost impossible to have much to say about this film. It is not an easy watch not because of the nature of the subject matter or Liza’s former occupation as a leader of Auschwitz but specifically because so much of what Munk intended was never created, leaving not just the film but the story it tells a cipher. We know only that the passenger who may or may not be Marta leaves the ship at one point and Liza sails on with her husband. We know nothing of any changes to Liza’s story or of the reality of the two stories she does tell. We are left instead with ambiguity.

It’s tragic. It is entirely possible that Pasazerka could have been one of the most powerful and moving documents on the Holocaust. Instead, it is the frame of a jigsaw puzzle, giving us a glimpse of the intended final result without showing us how the pieces fit together. The loss of Munk thus becomes a loss for all of us just as Marta’s appearance on the ocean liner reveals the gaps in Liza’s soul that lie in contrast to her evident serene outward appearance.

Why to watch Pasazerka: You owe it to Andrzej Munk.
Why not to watch: It’s incomplete.
Posted by SJHoneywell at 12:29 AM