Film: Ni Na Bien Ji Dian (What Time is it There?)
Format: DVD from NetFlix on kick-ass portable DVD player. 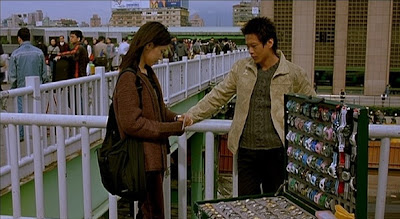 One of the things I like about this project is that it forces me into watching a number of films that I would otherwise have no contact with. There isn’t much of a chance I would normally select a film like Ni Na Bien Ji Dian (What Time is it There?, sometimes known as What Time is it Over There?). It’s not that this film isn’t something typically in my wheelhouse, but that there would be nothing specific about it that would cause me to select it. I don’t dislike quirky romances from other countries (after all, I dearly love Amelie), but seeing the description of the film on NetFlix wouldn’t normally cause me to put it at the top of my queue.

And it is an odd little romance. Hsaio-kang (Kang-sheng Lee) sells watches on a street corner in Taipei. He’s also recently experienced the loss of this father, an event that has caused his mother (Yi-ching Lu) to retreat into spirituality and mysticism. She is convinced that her late husband will reincarnate and return to the home, and thus much of what she does is predicated on that idea. This includes leaving out bowls of yin-yang water (half cold, half boiled) for him to drink and setting a place for him at meals.

One day, Hsaio-kang encounters Shiang-chyi (Shiang-chyi Chen) who is on her way to Paris. She wants a watch that tells dual time, and only likes the one that Hsaio-kang has on his wrist. Eventually, he agrees to sell it to her. From this moment on, things enter the realm of quirk. Feeling some connection with Shiang-chyi, Hsaio-kang decides to set every clock and watch he encounters to Paris time to create some sort of connection between them.

Naturally, this causes some problems for him. Setting the clocks in his own home to Paris time causes his mother to believe that her husband has returned, for instance, which further causes her to set her own schedule by her husband’s new time. Later, she determines that her reincarnated husband is afraid of light, so she shuts off the power and boards up the apartment, taping any slivers of light shut. Meanwhile, in Paris, we find that the lives of our two protagonists are strangely intertwined. While Hsaio-kang watches The 400 Blows, Shiang-chyi meets Jean-Pierre Leaud, the star of the film.

The film, and particularly Hsaio-kang and his mother represent a sort of private obsession, something that approaches insanity but doesn’t quite get there. It is a reveal into their personal and private lives, making explicit their desperate strangeness. In a sense they reveal the sort of thing that an outsider would call strange, manic, even crazy, but that to them makes a real sense. It’s my guess that most of us have these sorts of private oddities that we rarely wish to reveal to anyone else. Here, they are laid bare.

Where many viewers will have a problem, and in fact where I had a problem, is in the film’s pacing. It is monumentally slow. At times, this is not an issue. The film unfolds at its own sedate rate. At times, this is strikingly beautiful, allowing us to see our characters as they exist both in the world and in their own little world. At other times, though, it feels oppressive, as if the film has stopped and we are merely watching people go through their everyday routine. Others may well have more patience for this than I—there were several times in the film that I simply wished for it to move on to the next scene or to at least change the shot so that I wasn’t continually watching the same actions from the same perspective.

Ultimately, this is a film about loss and separation. Hsaio-kang deals with his separation from this idealized fantasy woman, his customer, by attempting to move his world to the one she lives in. She, on the other hand, retreats into herself as she exists in a place unlike anything she has known in her life. Hsaio-kang’s mother retreats further, back into the past when her husband was alive. How each person deals with his or her loss, then, becomes the function of the film.

I’m not sure if I liked this film or not. I appreciate it for what it is, and am confident in saying that if nothing else, it is beautifully filmed. It simply may be too slow overall to be truly engaging. What could well have been delightful, odd, and quirky instead becomes simply odd.

Why to watch Ni Na Bien Ji Dian: There’s a real bittersweetness to the narrative.
Why not to watch: The pacing may be off-putting for many.
Posted by SJHoneywell at 1:07 PM

Email ThisBlogThis!Share to TwitterShare to FacebookShare to Pinterest
Labels: Ni Na Bien Ji Dian, romance, Tsai Ming-Liang, What Time is it There?