Film: Sasom i en Spegel (Through a Glass Darkly)
Format: Streaming video from Hulu+ on laptop. 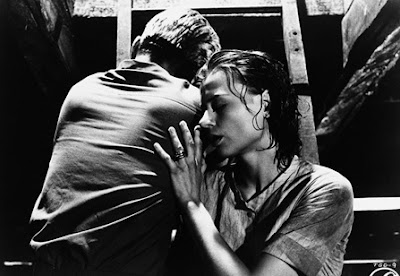 As I think I have mentioned before when discussing Bergman, there is a perception of the man’s films. The stereotype of Bergman is that it will be black-and-white, featuring Max von Sydow, and deal with bucketloads of existential angst and heady philosophical topics. And thus we have Sasom i en Spegel (Through a Glass Darkly). In terms of what people tend to expect from Bergman, this one hits on all cylinders.

The events of the film take place over a single 24-hour period, a single day in the life of a very disturbed family. Central to this narrative is Karin (Harriet Andersson). There is something distinctively off about her, and we learn early that she has recently been released from an institution. Karin is a schizophrenic, and indications are that she will never really be cured of her delusions. At least this is what her husband Martin (von Sydow) has been led to believe. He tells this to Karin’s father, David (Gunnar Bjornstrand).

While Karin’s insanity is the true prime mover of the film, It is his relationships with the other characters through the film, it is his reaction to them as well that drives the narrative throughout. Naturally the characters have a relationship with each other, but they are in many ways defined by their relationship with David. Karin, for instance, sees him in many ways as a protector initially, but discovers in his diary that he knows she will not be cured of her delusions, and that there is a part of him that wishes to watch and record this process. David’s relationship with his son Minus (Lars Passgard) is also critical. Minus is in his late teens and filled with the sort of insanity of all teens. He is energetic and wishes to please his father, but has no idea how to do so. He’s also sexually frustrated, which becomes an object of fun for Karin.

David’s desire to watch Karin deteriorate comes between him and Martin, and does so rather firmly. Martin believes that this attitude is cruel and callous, which it really is. But it is in many ways David’s inability to truly express himself. He confesses that Martin is right in many ways, but also that he considered suicide, but could not actually kill himself; now that he has passed through that particular trial, what sustains him is his love for his family—a love that seems to be unable to be expressed.

Of course, we’re going to spend a lot of time dealing with Karin’s insanity. During the night, for instance, she wakes up and heads to the attic. While there, she believes that there are voices coming to her from underneath the wallpaper. There’s also some indication that at one point in the film, with her splintering sanity starting to crack again, that she seduces her frustrated younger brother, which is really damn creepy.

Bergman, of course, is all about the pain and fear of our own existence. A lot of this also seems to come from what seems like the stereotypical Scandinavian inability to express emotion. Certainly, while Karin has no problem expressing her feelings or bizarre impulses, and Martin is fairly easy to understand, David is emotionally closed off to the point that Minus believes it is impossible for him to have a meaningful conversation with him. This only serves to further exacerbate the problem. In a sense, David’s inability to communicate with his son becomes a self-fulfilling prophecy. He cannot communicate with Minus, so he simply does not communicate with Minus. Minus says at much at one point, wondering if every person is trapped inside his or her own private cage.

Of course it’s depressing, even if it genuinely attempts to end on an up note. After all, it is a Bergman film. Why? Because it seems very much that at least for some of the people, Minus is correct. Karin in particular is in her own little world of schizophrenia, knowing that there's no way for her to be cured of the disease. The others certainly try to reach her, but she is unreachable. There's an attempt at resolution, and we even get a little at the end. However, ultimately, each one of us is alone. Cheery thought!

Why to watch Sasom i en Spegel: It’s what you think of when you think of Bergman.
Why not to watch: It’s also as weird as you expect it to be.
Posted by SJHoneywell at 11:55 PM