Top of the World

Film: An Affair to Remember
Format: Streaming video from NetFlix on rockin’ flatscreen.

There’s a distinct difference between the idea of a romantic comedy and a romance. Romantic comedies have a tendency to focus quite a bit on the comedy, and the comedy tends to be of the improbably, wacky kind. For me, a rom-com is a known quantity—we know that the girl is going to end up with the guy we want her to, because that’s the way they work. The guy we don’t want her to be with will be the sort of person who treats her badly, or ignores her, or is stupid. The film requires that we dislike him so that when she ends up with the other guy, we’re happy about it. Or it requires that the guy change dramatically so that he’s no longer a jerk by the end of the film. There aren’t a ton of exceptions. 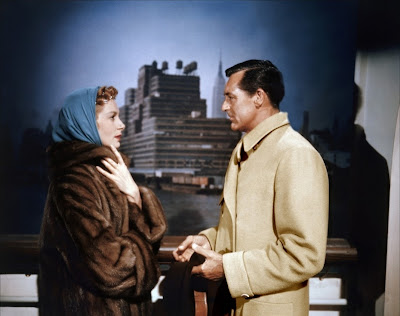 Romance, on the other hand, offers us mystery. Most of the truly great romances end with our two lovers apart, or dead, or at the very least unhappy and aching to return to those days they had together. But there are a few that end with the couple together. The success of a romance is not in bringing laughs, but in tears, either tears of sorrow when the lovers are forced apart permanently or tears of joy when it is finally revealed that they will be together. Such a film is the classic romance An Affair to Remember.

Nickie Ferrante (Cary Grant) is an internationally known playboy who has broken the hearts of hundreds of society’s best women. He’s crossing the Atlantic on a cruise ship, because waiting for him in New York is Lois Clark (Neva Patterson), an heiress to a whopping fortune. It seems that Lois has finally snared Nickie, and he’s prepared to tie the knot. Also on the ship is Terry McKay (Deborah Kerr), a former nightclub singer turned socialite thanks to the attentions of businessman Ken Bradley (Richard Denning).

Of course, Nickie and Terry meet cute on the ship. There’s an instant chemistry between them that is tempered by her wanting to keep him at arm’s length. But they keep running into each other until it becomes something of a joke. When the ship makes a stop in a French port, he invites her to join him. He tells her that he’s going to visit his grandmother (Cathleen Nesbitt). She doesn’t believe him, but she goes along anyway, and it is here that the relationship changes. Grandma Janou is real, and she’s quite the charming old lady. She instantly takes to Terry, and hints very much that she’d like to see the two of them together. It is here that our two characters truly start to fall for each other. Back on the ship, they share a long kiss, and then decide that it would be better for the both of them if they didn’t spend time together.

Of course, everyone else on the ship has them paired off, and everyone else on the ship knows who he is at the least. On the last night of the voyage, they decide to throw caution to the wind and be seen together. The also make a bold decision. In six months’ time, if neither of them have been married, they will meet at the top of the Empire State Building and pick up from there. Nickie is determined that he will make a living for himself to be worthy of her. And the two go their separate ways. Terry goes back into singing and Nickie attempts to start a new career as a painter.

Of course, tragedy strikes. On her way to the top of the Empire State Building and running late, Terry runs across the street and is struck. Nickie, of course, knows nothing of this and believes that she has stood him up and left him at the romantic equivalent of the altar. She, on the other hand, is too proud to let him know what has happened, and avoids all contact with him. And thus the two pine for each other. He is unable to find her and she is unwilling to find him until she can walk again and find him on her own terms.

Let me be the first to say that An Affair to Remember is not without its problems. There’s no reason, for instance, for Nickie to be world famous as a playboy if he’s as poor as he’s made out to be at the end. See, he wants to be worthy of Terry, and throws himself into his painting as a way to make money, but he’s not that great at it. Terry, on the other hand, is forced into a job as a musical director for a group of street kids, and so both live in reduced circumstances. But if he’s this poor, what is Nickie famous for? Where is his hidden wealth? We never find this out.

Additionally, Terry is unrealistically stubborn. There’s a streak of perfectionism in her a mile wide. She can’t return to Nickie until she is able to walk. If she never fully recovers, that event might never happen. She’s pretty blasé about this, too.

So let’s talk about some of the good stuff. I love the relationship between the two main characters. There’s real chemistry there. It helps immensely that I like all of the characters in this film. Everyone is, for the most part, a decent human being who I like. This is particularly true of Ken and Terry.. It’s easy to make the abandoned lover a creep who we actively route against. Making that character sympathetic as well makes for a deeper, richer film. We certainly want Terry and Nickie to end up with each other, but we can’t root against Ken because that doesn’t seem right, either.

This is a difficult film to dislike completely. An Affair to Remember is sweet and heartfelt even if Terry is stubborn and a bit dense. Hell, pride is sort of its own reward.

Why to watch An Affair to Remember: Achingly sweet
Why not to watch: You’ll spend at least a part of the movie yelling at the screen because the characters are either rock stupid or stubborn beyond all measure.
Posted by SJHoneywell at 11:54 PM

Email ThisBlogThis!Share to TwitterShare to FacebookShare to Pinterest
Labels: An Affair to Remember, Leo McCarey, romance