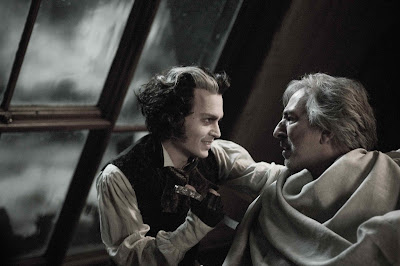 I’ve been in a horror movie mood lately. That’s not hugely shocking, since horror ranks as one of my favorite genres. I’ve had a copy of Sweeney Todd: The Demon Barber of Fleet Street sitting on my desk for more than a year and I haven’t been able to watch it. For as much as I love a good horror movie, I have a real issue with throat slitting. That just about more than anything else bothers me, and since that is the mode of execution in this film, well, you can understand my reticence.

Honestly, the fact that it’s a musical didn’t bother me at all. I’ve grown far more accustomed to musicals over the last six years and I don’t shy away from them as I would have just half a decade ago. Nope, it’s the throat slitting. I’m not sure what it is. Chop someone’s head off in a film, and I’m fine. Slit someone’s throat and I get immediately squeamish.

As it happens, yes, the throat slitting bothered me quite a bit, but it really should have been the singing that was my main concern. The blood used in Sweeney Todd (I’ll be leaving off the long post-colon from this point forward) is very evidently red paint and looks like nothing so much as the stock recovered from an Argento film from the 1970s. No, the fact that our main cast sings its lines and not a one of them seem to have actual musical training turns out to be the biggest issue I have.

Sometime in the early-mid 1800s, barber Benjamin Barker (Johnny Depp) is falsely accused of a crime and sent to Australia. This happens so that corrupt judge Turpin (Alan Rickman) can have Barker’s wife Lucy (Laura Michelle Kelly). As the film starts, Barker has returned from Australia, rechristening himself as Sweeney Todd. His plans are to find his wife and now-grown daughter Johanna (Jayne Wisener) and exact his revenge on Turpin and Turpin’s assistant, Bamford (Timothy Spall).

His revenge starts by returning to his old shop/home on Fleet Street. The shop sits above a pie shop run by Mrs. Lovett (Helena Bonham Carter), who is having difficulty finding meat to put in what she freely admits are the worst meat pies in London. She tells him that his wife was raped by Turpin and that she poisoned herself with arsenic, and that his daughter now lives as the ward of Judge Turpin. Todd sets up shop and tries to drum up business by challenging a local barber named Pirelli (Sacha Baron Cohen) to a shave-off. Todd wins, of course, and is soon visited by Pirelli. As it happens, Pirelli was once Todd’s assistant and has recognized him by his silver razors. He demands half of Todd’s income. In reply, Todd kills him, and Mrs. Lovett hires Pirelli’s assistant, a young boy named Toby (Ed Sanders). It’s Mrs. Lovett who comes up with what to do with Pirelli’s body, and soon her pie shop is a going concern, what with the suddenly plentiful supply of meat.

Meanwhile, Anthony Hope (Jamie Campbell Bower), Todd’s shipmate on his return from Australia, has taken to wandering about London. Naturally, he catches a glimpse of Johanna and is immediately entranced with her and the feeling is mutual. Johanna, though, is also the object of affection of Judge Turpin. Now Anthony wants Todd’s help in freeing her, not realizing that Johanna is Todd’s daughter and also being unaware of Todd’s life goal of killing Judge Turpin.

So, let’s get to the meat of it (yes, pun intended). There’s a lot of blood, and most of it comes from a razor. Sure the blood isn’t realistic at all, but there are plenty of instance of arterial spray throughout the film once things get going. It seems for a time that everyone who sits in Todd’s chair gets a quick application of lather, a quicker cut, and a long drop down to Mrs. Lovett’s meat grinder. That seems like a bit of a plot hole, but that is explained—obviously they can’t kill everyone, and what would they do with that much meat anyway? Still, the body count is pretty substantial.

It’s also well filmed. It’s unquestionably a Tim Burton film. Both Johnny Depp and Helena Bonham Carter are ghoulishly pale and have dark eye circles that are big enough to border on their cheekbones. The predominant colors are black, white, and red as well. It almost seems strange not to have a Danny Elfman soundtrack. It’s worth noting that Burton does a tremendous job of making this look like a movie and not a filmed stage production. Locations are well used throughout, and someone who didn’t realize that this was based on a theatrical musical wouldn’t specifically know by seeing this.

But, as I said above, it’s the singing that bothers me the most. I admit that everyone in the cast can carry a tune, but they are not trained to it, and that’s really evident all the way through. Oh, I’ve certainly heard worse singing in film, but there was something about it that didn’t work for me, and this is true despite how much fun it was to hear international treasure Alan Rickman belt out a couple of lines. It’s Jayne Wisener who bothered me the most in this regard—her voice is piercingly, eardrum-damagingly high. Thankfully, she only has one real song. And while Timothy Spall is probably the least accomplished singer in the film, I found something rather charming about his one song.

So is it good? I suppose it is. It’s not a film I’ll choose to come back to very often. It feels much more like a gimmick than anything else, and I can’t help but think that perhaps it would’ve been better as a straight horror/drama than as a musical.

Why to watch Sweeney Todd: The Demon Barber of Fleet Street: A modern musical and a stage play that doesn’t look like one.
Why not to watch: The singing isn’t all it could be, and that’s pretty serious for a musical.