Off Script: The Hidden

Film: The Hidden
Format: DVD from personal collection on laptop. 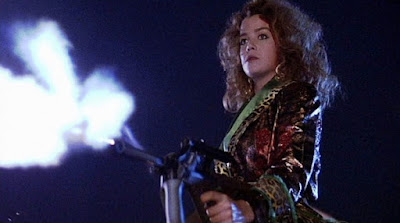 There’s no good reason why The Hidden should work as a film or even as a story. This is the kind of movie that requires its audience to have a massive willing suspension of disbelief for any of it to work. It’s also a film that has a cast made up almost entirely of “that-guys”; watching it is like seeing every character actor from the 1970s and 1980s in one place. There are some definite horror elements here even though this is primarily a science fiction film. It’s also a spin on the buddy cop formula and the idea of an odd couple in terms of our two main characters. There’s a lot at play here, some of which seems to have been picked up by the high budget and much higher grossing Alien Nation of the following year.

The eventual buy-in is that you have to accept that there are alien creatures who have shown up on Earth and can invade the body of people and animals and take them over. We don’t know this right away, although we learn pretty quickly. What we also learn eventually is that one of these creatures is a nasty slug-like monster and that it’s a criminal that enjoys nothing more than slaughtering innocents, stealing fast cars, and causing as much mayhem as possible. The other is essentially a cop tracking down the bad alien. Got it? Good, because we’re going to go on quite the joyride in the 97 minutes The Hidden runs.

The opening scene is far and away my favorite bank heist scene in film history. We see a bank’s security camera with people conducting their business. Eventually, we notice a man in a trench coat (Chris Mulkey) standing in the middle of the scene. He waits, and as a group of men carrying out sacks of money start to leave the bank, the whips out a shotgun, shoots them all, takes out another security guard, picks up the sacks and starts to walk out. Eventually, he notices the camera, smiles, and shoots it. Our criminal walks outside, throws the money into a black Ferrari, takes the time to put a heavy metal tape into the tape deck, and proceeds to lead the cops on a high speed chase that ends up in a road block, the perp taking a dozen or so bullets, and the Ferrari exploding.

Cut to the hospital, because our perp has survived, but just barely and probably won’t last the night. Suddenly, the man’s eyes open up and he makes his way to the neighboring bed. The giant slug creature crawls out of his mouth and enters the body of the next patient, who sits up and walks out of the hospital, starting his own crime spree. This is something that will happen multiple times through the course of the film.

On the case to stop the sudden surge of crime is police detective Thomas Beck (Michael Nouri) and his partner Cliff Willis (Ed O’Ross), assisted by detective Sanchez (Richard Brooks). While the police department deals with the upcoming visit to the area of a U.S. senator expected to announce a presidential run (and this will become important eventually), an agent of the FBI named Lloyd Gallagher (Kyle MacLachlan) arrives to pursue the man responsible for the bank heist, and then eventually the sudden string of law-abiding citizens gone rogue. Agent Gallagher seems pretty off in a lot of ways, but he also seems to be able to track this crime spree before things happen, knowing who will become the next instigator of random violence. If you’ve guessed that Lloyd Gallagher is our alien cop, you’re on the right track.

There’s a lot to like with The Hidden starting with the fact that everyone involved in the film buys completely into the ridiculous premise. The film plays things completely straight, and it wouldn’t work for a second if they didn’t. The plot isn’t that exciting—it’s more or less a repeat of the same thing over and over, but each time the criminal alien switches bodies, things are just different enough that it works. What really works here are the little jokes that demonstrate how much Gallagher is out of his element in a human body. There’s also an obligatory scene in a strip club (all ‘80s cop movies required a strip club scene, after all), that has some surprising results. And that’s another moment that sells the movie for me. Eventually the criminal alien inhabits the body of a stripper (Claudia Christian), and there are a few great moments of the alien figuring out how its new body is different from the old one.

In a lot of ways, The Hidden relies on standard movie tropes from all of its genres. There are buddy cop moments, fish-out-of-water moments, science fiction moments and a few horror tropes tossed in as well. But it plays them all straight and makes them all work as well as it can to get to the resolution we’re eventually sure that we’re going to get to. There are no surprises in where The Hidden takes us, but a few really great moments along the way to getting there.

I saw The Hidden for the first time when it was still relatively new. I can’t pinpoint the month or year, but it was between 1988 and 1991, so when the film was still fairly recent, and I’ve loved it ever since. This is one of the few films I’ve owned both on VHS and DVD and I’m not ashamed to say that when VHS went out of favor, I snapped up a copy of this on disc the first time I found it. The Hidden isn’t going to rewrite any movie rules. It does, though, provide a completely entertaining romp within its various genres by playing everything nearly perfectly. If you like science fiction at all or like horror at all, or just like cop movies that stray outside of that genre’s guidelines, The Hidden is absolutely worth your time.

Why to watch The Hidden: There is no reason it should work as well as it does.
Why not to watch: The buy-in for the premise is pretty huge.