Picks from Chip: The Way We Get By

Film: The Way We Get By
Format: Streaming video from Hoopla Digital on The Nook.

This is the fourth in a series of twelve movies selected by Chip Lary at Tips from Chip. 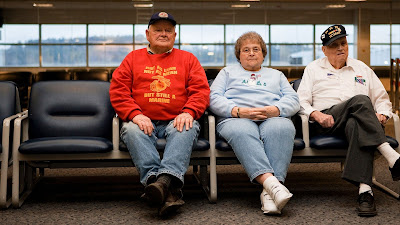 Chip Lary, who picked this film for me, lives in Maine. I’m certain that this is part of the reason that Chip found this film in the first place, since it takes place in large part at the Bangor International Airport. That airport is a joint civilian/military airport, and as one of the easternmost airports in the United States, it serves both as a departure point and an arrival point for U.S. military troops heading to and from combat areas in the Middle East. It also features a woman named Joan Gaudet, the mother of Aron Gaudet, the film’s director.

Like many documentaries, The Way We Get By doesn’t so much have a story as it has a topic. The film follows the lives of three elderly people, the aforementioned Joan Gaudet, William Knight, and Gerald Mundy. What makes these folks and a number of others who appear in the film interesting is that they are on call 24/7 to head out to Bangor International whenever a flight comes in bringing in troops from combat. They are there to welcome people back from war, to let them know that they are appreciated, and as it comes out late in the film, to give themselves a sense of purpose and meaning.

As you might expect, a great deal of this concerns these efforts with the returning troops. They also offer free cell phone use for the incoming troops to call loved ones and let them know they are back on American soil. The troops themselves are often overwhelmed that there are people at the airport to greet them even in the middle of the night. There are short interviews with some of the troops, many of whom were seen off from Bangor a year earlier by the same people.

Of course, only a part of the film deals with the greeting of returning troops. A lot also deals with the lives of these people who have devoted themselves to this task of making sure the soldiers are welcomed home. They also have to deal with their lives, lives that include the deaths of loved ones, grandchildren shipping out to foreign wars, cancer and other health issues, and an inability to maintain a semblance of their old lives. It’s explicitly stated by one person late in the film that the returning troops are now the only thing giving his life any meaning. Without them, he feels no purpose in continued existence.

For all of this, The Way We Get By is surprisingly non-jingoistic and doesn’t often slide into the maudlin. It would be easy for the film to go there. There are moments when it seems perhaps a little too earnest in trying to thrust dignity on the elderly greeters, not trusting that they have an inherent dignity. We spend a lot of time with the trio at their individual houses, which gives us a better opportunity to learn about them, but also often holds them up at times as being pitiable, and I’m not convinced that’s the right way to go.

This is a hard film to dislike—it seems designed to be resistant to that, and it does this well. It avoids being sappy for the most part and trying to present something as real. Overall, it does this well. But it could have just as easily had the same message as a short or gotten more involved with another 20 minutes. It seems simultaneously too long and too short.

Why to watch The Way We Get By: Regardless of your stance on war, it’s hard to find fault with these people.
Why not to watch: I don’t have much to say here. You owe it to these folks to give them your time.

Email ThisBlogThis!Share to TwitterShare to FacebookShare to Pinterest
Labels: Aron Gaudet, documentary, Picks from Chip, The Way We Get By