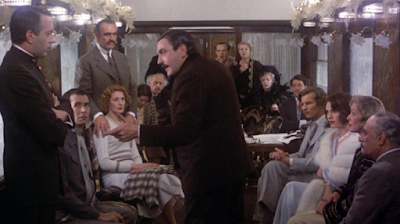 I’m pretty sure that I’d seen Murder on the Orient Express in the past; I have some vague recollections of it even if I didn’t remember a lot of the specifics. I didn’t remember many of the details, but once we got to the ending, I did remember that, and I’m pretty sure that this is one of the Agatha Christie stories that I haven’t actually read, despite having a small fondness for the mysteries involving Hercule Poirot. Make no mistake: this is an Agatha Christie mystery, which means we’ll get a death, interrogation scenes, and a summing up of the detective implicating everyone in the mystery before pointing the finger.

Before I jump into the specifics, I’ll say this—that brief listing of what the movie will entail, sadly, covers the bulk of Murder on the Orient Express. We get a body straight away, a little bit of investigation and a few starting clues, and then it’s a series of interrogation sequences. Hercule Poirot (played here by a nominated Albert Finney) calls for everyone to be assembled for the summing up before he’s finished his investigations.

Before the film starts, we are treated to a series of newspaper headlines about the kidnapping of a young child named Daisy Armstrong. The plot of this story—told exclusively through headlines and faded photographs—follows roughly the story of the Lindbergh kidnapping, including the paying of the ransom and the discovery of the child dead. Flash forward five years and we’re in 1935 and in Europe.

Detective Poirot finds himself returning to England on the eponymous Orient Express. He finds himself suddenly in the company of Bianchi (Martin Balsam), the director of the line, who tells him that despite the train’s overcrowding, he will find him a proper berth. The train pulls out, and as tends to be the case in something like this, we are given a motley assortment of passengers. Among them is a man named Ratchett (Richard Widmark), who discovers Poirot’s identity and offers him $15,000 to act as his bodyguard since he has been receiving threatening notes. Poirot refuses, and suffers a small pang of guilt when Ratchett turns up dead of a dozen knife wounds of varying depth and severity. Hey, I promised a corpse straight away, did I not?

Poirot, assisted by Bianchi and a Doctor Constantine (George Coulouris) investigate the death and, through a little wizardry from Poirot, discover that it is connected to the Daisy Armstrong case. The three then begin interrogating all of the other passengers and staff on the train. As I said, this is a motley crew. To save time, I’ll put it this way, and if you’ve any experience with Agatha Christie stories, none of this will be a shock: everyone on that part of the train with the exception of Poirot, the doctor, and Bianchi, had a motive to kill the dead man. Ah, but which one of them did it?

Murder on the Orient Express is a film that gets its power from the cast, and it’s quite a cast. Signing up for a berth on the train are Lauren Bacall, Ingrid Bergman (who actually won a Supporting Actress Oscar for this role), Jacqueline Bisset, Sean Connery, John Gielgud, Wendy Hiller, Anthony Perkins, Vanessa Redgrave, Michael York, and Jean-Pierre Cassel. This is exactly the sort of movie that has a poster with a large central image and then a row of boxes along the bottom showing a picture of each of the many different well-known stars who make an appearance.

It’s all fun and games, except that it’s really a movie that doesn’t go that far below the surface. After the body shows up and there’s a little investigation, it is almost literally a series of question and answer sessions between Poirot and the passengers. A few more clues pop up now and then, and we get to a final answer just as it seems that the film is really getting ready to start. As befits the sort of crime that takes place in a story like this one, the actual summing up takes a pretty good amount of time. In fact, it’s pretty much the entire third act.

As such, Murder on the Orient Express feels thin. I’ve been saying recently that a lot of the movies I’ve been watching have been too long for the stories they tell. Murder on the Orient Express is the opposite—since everything happens so quickly, it doesn’t feel long enough, or like it gives the audience enough of a chance to really get to the correct solution. We get very little of Poirot’s thinking, which makes his conclusion not that easy to follow and seem like a number of lucky guesses.

Albert Finney is certainly having a grand time with it, and I like his depiction of Poirot. He is certainly the most memorable part of the film, although I think I prefer Peter Ustinov’s take on the character in Death on the Nile a bit more. While the rest of the cast is good, most of them are on screen so little as to be nothing more than one-dimensional characters easily forgotten, save for the fact that almost all of them are immediately recognizable actors.

Murder on the Orient Express isn’t bad, but it’s a bit disappointing. I strapped in for what I thought I remembered as a good mystery and instead found something that was almost straight procedural without much in the way of offering a path to a correct solution by anyone not actually in the film. I’ve read enough Christie to know that I probably wouldn’t guess the murder from the novel either, but I think I’d at least have a better chance, and that’s really what I’m looking to see in a film of this genre.

Why to watch Murder on the Orient Express: The guts of a pretty good mystery.
Why not to watch: The entire film is a crime, a series of interrogations, and a conclusion.