Film: Lover Come Back
Format: DVD from NetFlix on laptop. 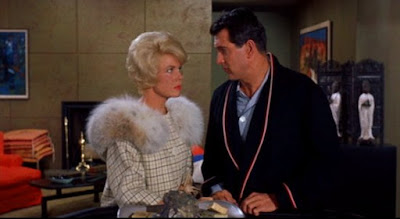 Doris Day and Rock Hudson are remembered as a classic on-screen couple even though they only made three movies together, and since Tony Randall was in all three, one wonders why he tends to be forgotten in this arithmetic. Anyway, of those three movies, two were nominated for Best Original Screenplay. The first collaboration, Pillow Talk, won. The second, Lover Come Back, was nominated, but didn’t win. But a nomination is good enough for inclusion on this blog, and it’s what showed up from NetFlix. In truth, Lover Come Back probably didn’t win because it’s more or less the exact same movie.

No, really. In Pillow Talk, Doris Day plays an interior decorator who shares a party line phone with songwriting playboy Rock Hudson. Eventually, the two meet and Hudson fakes a persona, woos her under false pretenses, and the two end up together despite his deception. In Lover Come Back we get the same plot except that in this case, the two are direct business rivals. In Pillow Talk, Tony Randall plays Hudson’s rich friend and Broadway benefactor. In Lover Come Back, he plays Hudson’s wealthy and socially meek boss. These are, more or less, the same movie.

Carol Templeton (Doris Day) is an advertising executive on Madison Avenue who works hard to bring in new clients and sell their products. Jerry Webster (Rock Hudson) is an account executive at a rival firm who wins clients by boozing them up and getting them dates with show girls. When Jerry steals a new client away from Carol’s firm, she declares war and does so by bringing in showgirl Rebel Davis (Edie Adams) to testify to the Ad Council about Jerry’s sleazy tactics.

Jerry, of course, is too slick to be caught. He promises Rebel that she’ll be the star of a new series of television ads. He tells her about VIP, a brand new product that is about to come on the market and wants her to be their spokesperson. He even has her film a series of television spots for the new product, all so she will go talk to the Ad Council about what a fine human being he is. The problem is that VIP doesn’t exist. This problem is exacerbated when company president Peter Ramsey (Tony Randall) okays the VIP spots to run on television, creating an immediate desire for the non-existent product. To cover themselves, Peter and Jerry (mostly Jerry) decide to create VIP by hiring curmudgeonly but broke chemist Linus Tyler (Jack Kruschen) to create the new product.

Carol gets wind of VIP and starts investigating. Naturally, she encounters Jerry while he is in the chemistry lab and assumes that he is Linus Tyler, an assumption he does nothing to disabuse her of. Wanting the VIP account, she proceeds to use Jerry’s tactics—fancy dinners, expense account trips and the like. Eventually, Linus Tyler does create VIP. It’s essentially a mint that packs the alcoholic equivalent of a three-martini lunch, or as Dr. Tyler calls it, a good ten-cent drunk. And since Carol can’t hold her liquor (and looks like Doris Day), romantic entanglements ensue that can (and will) only be resolved by getting Carol and Jerry together on a more permanent basis.

Like I said, it’s Pillow Talk all over again, but not nearly as charming or as entertaining. The deception played by Jerry here seems far more devious and mercenary than it did in the previous film. At least in Pillow Talk he was genuinely interested in her from the start, while here this is purely a deception created by a business rivalry until the end. It’s actually kind of ugly and, at the risk of coming across as morally prudish, a bit dirty. The idea that this is some sort of romantic ideal to which people should aspire is insulting to say the least. A marriage that starts and is essentially based on a cruel deception (and this one is cruel) would seem to be doomed.

And that’s really the problem here. It’s not simply that a good 80% of the plot is recycled from the earlier film. It’s that all of the charm of the original film is completely lost in this one. I liked Pillow Talk because it seemed to have its heart in the right place most of the time. lLover Come Back comes across as far more cynical, and that doesn’t work for me in what is supposed to be a romantic comedy.

That said, I didn’t hate this. I didn’t particularly like it that much, but it has its moments. The writing is good, for instance, and I find it difficult to truly dislike the cast. However, everyone here was capable of better work in better material. Where Pilow Talk felt like a madcap romance gone awry, Lover Come Back is pessimistic and almost contemptuous of its audience.

Oh, and Doris Day wears the single ugliest collection of hats I have ever seen, each one worse than the previous. The purple cone-shaped hat with frilly pom-poms she wears at the beach looks like a cartoon character’s French tickler. For all the glamor Doris Day could pull off, someone needed to slap the wardrobe department for this.

Why to watch Lover Come Back: Hudson and Day made only three movies together and they did have a great onscreen chemistry.
Why not to watch: It’s a cynical Pillow Talk with an astonishing array of terrible hats for Miss Day.