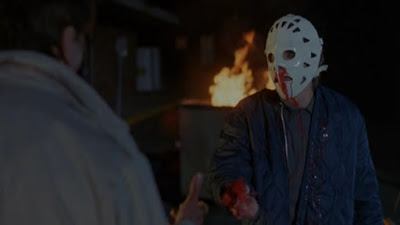 There’s a particular sick pleasure to a film like Alone in the Dark from 1982. This is a cheap horror film, the first film ever produced and distributed by New Line Cinema, so there aren’t a lot of surprises in terms of the subject matter here. The cast, though, is crazy for a cheap slasher film. It says something when Dwight Schultz whose greatest claim to acting fame comes from his roles as the crazy Murdoch on The A-Team plays the sanest one in the bunch. Donald Pleasence isn’t too difficult to cast in a film like this one—he had a track record, and seeing Jack Palance hamming it up as a psycho isn’t a stretch. But Martin Landau? If nothing else, I had to see this just for that.

Dan Potter (Dwight Schultz) shows up for his new job in a psychiatric hospital headed by Dr. Leo Bain (Donald Pleasence), who operates a very different sort of mental facility. Bain is of the belief that his patients should be given a great deal of autonomy and that they aren’t so much crazy as they are simply off on little mental vacations. He thinks this of all of his mental patients, including the dangerously, criminally insane men on the third floor. This group of four includes military veteran Frank Hawkes (Jack Palance), a dangerous paranoid who is convinced that Dan Potter got his position by killing the previous doctor; Byron Sutcliff (Martin Landau), a preacher with a penchant for burning churches with the congregation still inside; Ronald “Fatty” Elster (Erland van Lidth), a gigantic child molester; and Skaggs (Phillip Clark), known as “the Bleeder” because he gets nose bleeds when he attacks a victim.

The four patients, thanks to Frank’s mania, come to believe that their previous doctor is now dead at the hands of Dan Potter, and plot to escape and kill him. They arrange an area-wide blackout and use the opportunity to escape from their electricity-based security area. Rather than joining in the spontaneous looting in the nearby town, they get new clothing for themselves to hide the fact that they are inmates and arm themselves for what they plan to do. Predictably, murder and mayhem follow, with Dan Potter and his family being the eventual targets.

There are some really good ideas here. No, seriously. The idea of Skaggs, for instance, is a great idea for a slasher/horror character. His particular insanity makes him unwilling to show his face to people he doesn’t know, so we don’t actually get a good look at him until a good distance into the movie. For part of the film, he even wears a Jason Voorhees-style hockey mask that gets blood-soaked from his own nosebleeds. It’s a great character concept.

The movie itself is pretty predictable, though. It’s an early 1980s slasher, so that’s to be expected. It’s not a shock (and not really a spoiler) when the Potter’s baby sitter and her boyfriend are killed for having sex while the Potters’ daughter is sleeping in the next room. It’s that law of slasher/horror films: sex = death. We expect a few inconsequential characters and maybe a main one or two to get bumped off along the way.

No, it’s really all about seeing this cast in such a cheap, weird little film. Martin Landau comes at this role with all of the intensity he can muster. For a guy who has had such a solid career with some great films under his belt, he plays Byron Sutcliff like this is his opportunity to break into movies. Jack Palance is, of course, Jack Palance. There isn’t a role that existed for him that didn’t involve him basically playing himself at some place on the sanity scale. Here he’s turned up to full psycho.

Alone in the Dark isn’t ever going to win any serious awards, but it’s not meant to and it was never intended to be that kind of a film. It’s incoherent in places and pretty choppy. Characters show up for a few minutes and are eliminated just as quickly. It’s a horror movie Game of Thrones in that respect.

Honestly, it’s hard to dislike. There’s an earnestness here, a sort of horror movie honesty that is difficult to downplay. It very much wants to be taken seriously and to bring something new to the genre, even if all it really brings is a little class in the form of the casting. This isn’t a film I would recommend to anyone who isn’t already a fan of the horror genre, but for those who are, it’s a film that begs to be seen. Believe the cult following with this one if you like unknown and slightly underrated horror films. You could do a hell of a lot worse. Whatever you do, don't mix it up with the movie of the same name made by Uwe Boll.

Why to watch Alone in the Dark (1982): How often do you get to see Martin Landau play a straight-up lunatic?
Why not to watch: For all its pretensions, it’s not that great.

Email ThisBlogThis!Share to TwitterShare to FacebookShare to Pinterest
Labels: Alone in the Dark, horror, Jack Sholder