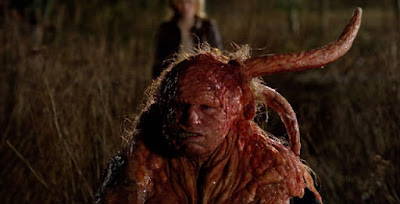 Mashing up a couple of genres is at best a risky proposition. Most of the time, it’s simply not done well and the film, rather than being a blend of two good genres, turns out to be not enough of either of them. Slither is how it’s done. This isn’t a film that really goes for scary as much as it goes for straight-up gross out. It’s not scary, matter of fact and it is really gross. It’s also really funny. It’s not merely funny in a few scenes; there are jokes here that play with the expectations of the audience and that throw back to classic horror movies of the past several decades.

Slither is sort of a blood-soaked version of Invasion of the Body Snatchers with a little bit of the John Carpenter version of The Thing. A more honest comparison is probably with Night of the Creeps, although writer/director James Gunn’s horror roots go quite a bit deeper than this. A meteor impacts the planet near a small town somewhere (Arkansas?) in the rural American South. Attached to the meteor is a life form that infects local rich guy Grant Grant (Michael Rooker) and turns him into a creature that a) wants to eat a vast amount of meat, b) can turn other creatures into meat-craving breeders that eventually explode into a giant swarm of slugs, and c) can use those slugs to turn people into acid-vomiting zombies that mainly are used to bring meat to the breeders.

Slither is a slow-starter even though Grant gets infected pretty early on. The real apocalyptic zombie stuff with the slugs starts happening about mid-way through the film. The opening scenes deal much more with the transformation of Grant into the creature that he eventually becomes. There’s a good amount of slime going on here, which reaches a glorious high point when Grant’s first breeder victim, Brenda (Brenda James) literally explodes in a massive shower of brain-controlling slugs.

The problem with reviewing Slither for me is that I don’t even really know where to start with it. Do I talk about the scores of little throw-away references to classic horror movies (like the mayor’s name being the same as Kurt Russell’s character from The Thing or the local bar being named after Frank Hennenlotter)? Do I hit on the dialogue that is filled with four-letter hilarity? The fact that the film uses mainly practical effects and uses them tremendously well? The oddball plot that everyone plays completely straight to great effect? The realization that the slug-infested “zombies” are menacing and scary and still wobbly and comic? That it doesn’t rely heavily on the horror movie cheap tactic of jump scares? That the dialogue is both funny and comes across as natural?

What makes me the happiest about Slither is that James Gunn is obviously a fan of the films the he is referencing. Slither is not a spoof, but a genuine horror movie and genuinely funny. It’s not funny because it’s bad; it’s funny because it really is funny. Gunn’s script pulls out as many of the stops as he can on the gore and on the comedy as befits someone who cut his teeth working for Troma Studios.

There is a moment in Slither that sells it to me more than anything, though. I won’t go into spoiler territory here. Instead, I’ll just say that there is a Chekov’s gun joke here that goes for about 20 minutes of the film’s narrative and ends so anticlimactically that I laugh at it every time. It’s smart writing to not merely give us our expectations but to play with the very conventions of narrative this way. To do so in a horror comedy movie shows a fantastic amount of trust in the audience and reflects someone who was, at least at this point in his career, pretty underrated.

For those with a weaker stomach, Slither is not a movie to watch with a bucket of popcorn. There is a moment of surprising gore in the middle of the film. Most of the rest of the gross stuff isn’t really squeamishness-inducing but just sort of nasty.

I appreciate that Slither has generated a large cult following for itself, but I wish that it had gotten a bigger following in the theater. While it has almost certainly made its money back by now, it lost at the box office, which makes it less likely that other horror comedies of this caliber will be produced. That’s a shame, because the world could use more movies that are both filled with gags and designed to make the viewer gag.

Why to watch Slither: A near-perfect horror comedy.
Why not to watch: If you’ve got a weak stomach, you won’t like it.