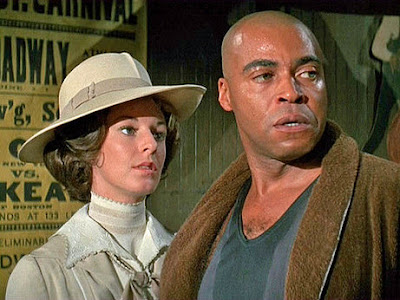 James Earl Jones has been nominated for a single Oscar. I find that surprising, although a look through his filmography, there’s a lot of schlock. It’s that voice, though. The man has a voice that can say just about anything and make anyone listening happy. That one Oscar nomination comes in The Great White Hope, an interesting title for a film that stars James Earl Jones. This is a boxing movie, at least nominally. In truth, it’s a drama with something like a romance thrown in. Even more, this is a film about just how good at racism Americans were 100 years ago. I say that, as an American, with no small amount of shame regarding my country’s past.

The Great White Hope is the story of Jack Jefferson (James Earl Jones), a character loosely based on the life and career of boxer Jack Johnson in and around the first two decades of the 20th century. As the film starts, Jefferson has been winning bout after bout, but the current champion Brady (Larry Pennell) has retired. This makes Jefferson kind of a de facto world champion. Brady is forced out of retirement to defend his title and Jack Jefferson pastes him as well, giving him the belt and the title for real, something that doesn’t sit well with white America.

That’s not the big reason that Jack Jefferson is hated, though. Prior to his fight with Brady, Jefferson was fighting in Australia. On the ship back, he meets Eleanor Bachman (Jane Alexander) and the two become romantically involved. This is a problem in those pre-WWI days since Eleanor is white. This is a love that cannot be—everyone is against it and only a few people close to Jack and Eleanor, mainly Jack’s agent Goldie (Lou Gilbert) and his trainer Tick (Joel Fluellen) seem to be okay with the situation. Jack’s triumphant return to Chicago is marred by people unhappy with his romantic situation. Hoping to get away from the noise and crowd, Jack and Eleanor head up to Wisconsin for a little vacation only to see Jack arrested for running afoul of the Mann Act, which prevents the transporting of women across state lines for lewd and/or immoral purposes. Yes, in the world of the film (and the reality of the 1910s), a black man travelling with a white woman was immediately considered lewd and immoral.

Eventually, Jack is convicted of the crime and sentenced to three years, but he skips his bail. He, Eleanor, Tick, and Goldie head instead to England in the hopes that Jack can arrange a few title defenses, but England won’t let him fight. In France, he can only get work fighting stiffs that can’t come close to challenging him. In Germany, he is reduced essentially to working in minstrel shows. Knowing that he can’t fight, Jack eventually ends up broke and frustrated in Mexico. ,p> The Americans, and specifically the boxing world wants him back, though. Part of this is the desire to see Jack Jefferson more or less punished for being black and loving a white woman. Part of it, though, is the desire to get the belt out of his hands. Jack is offered a deal to fight a specific opponent and lose. In return, his sentence will be reduced to six months, but it will mean having to give up the title and, one assumes, not attempt to reclaim it. Through all of this, his relationship with Eleanor deteriorates—both more or less accusing the other of the state that they have fallen to.

To a modern audience, The Great White Hope rings oddly hollow. There are certainly no ends to the stories of racism and unfair treatment in this country for centuries, but there is something that feels blatant and forced about this film. I know that it’s based on a real story and is certainly reflective of that in some respects. There is no question that we’re supposed to side with Jack and Eleanor, but the film lacks any sort of nuance in presenting their story.

Another issue is that despite a number of scenes with a cast of thousands, this is very clearly based on a stage play and it looks like it. In a lot of places. Director Martin Ritt uses locations well and has plenty of scenes shot outside, but the big scenes all look like they could have easily happened on the stage.

Another problem is the final fight, which is ultimately the only one we really see. The boxing in this match is terrible. Jack’s opponent (Jim Beattie) looks like he’s never thrown a single real punch in his life. It’s like he’s hitting with his palm instead of the meat of the glove. It’s oddly effeminate and it has the effect of making the climactic boxing sequence look completely ridiculous.

There are some good points, though. Both James Earl Jones and Jane Alexander are very good and clearly comfortable with each other and the roles. This is not surprising as both were reprising roles they had played together on stage. Jones plays Jack Jefferson as a man enraptured with his own ability and skill and unable to see that, despite being horribly unfair, his constant flouting of the law and common conventions is dangerous. This is a man wound up in his own pride and self-worth that he is unable to see past it. Jane Alexander does yeoman work in making Eleanor more and more pitiable as the film goes on.

The truth is that I probably won’t watch The Great White Hope again. It’s well shot and the lead roles are ably filled. But it also seems like a film that is weighed down by too many problems to make it a really great film.

Why to watch The Great White Hope: For its time, the ideas of this film were important.
Why not to watch: Easily the worst boxing you’re likely to see in a film.