Nick's Picks: I Saw the Devil

This is the fourth in a series of twelve movies suggested by Nick Jobe. 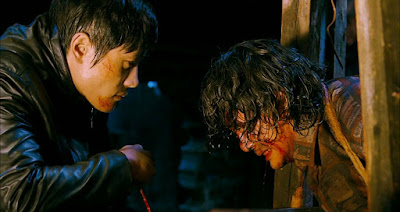 Last year in my set of 25 challenge movies, Chip Lary assigned me the film 3 Idiots, which I enjoyed. 3 Idiots, though, is a 3-hour film mostly in Hindi, which makes it kind of a daunting sit. This year, Nick has given my Angmareul Boatda, more commonly known as I Saw the Devil. As with 3 Idiots, this is a film I knew about and knew I’d watch eventually, but which is well past the 2-hour mark in length, in Korean, and concerns both a hyper-violent serial killer and a series of physical brutalities played out against him in revenge. There’s a reason that horror movies tend to be short; there’s only so much the audience can take.

I Saw the Devil is not a great deal more than a long tale of brutal revenge taken on a sadistic and twisted serial killer. Jang Kyung-chul (Choi Min-sik) is a bus driver who also happens to be a brutal serial killer. The first of his victims that we see is Jang Joo-yun (Oh San-ha). This turns out to be a serious problem for our killer because Joo-yun is the daughter of Jang (Jeon Gook-hwan), a police squad chief and the fiancée of Kim Soo-hyun (Lee Byung-hun), a secret service agent. When Joo-yun’s body is found, Soo-hyun dedicates himself to tracking down the killer, torturing him for as long as he possibly can, and then ending him.

And really, that’s what happens. Soo-hyun gets leads on four possible suspects and tracks them down one by one until he locates Kyung-chul and finds his fiancée’s ring in a gutter. Now that he knows the target, he tracks him down, beats the shit out of him, and force feeds him a transmitter so that he can tail him. Regularly, Kyung-chul finds a victim and is interrupted in his torturing of his prey by Soo-hyun who gives him a beat down, damages him in some significant way, and then sends him back out into the city to continue monitoring him.

This really is the whole movie. I understand the point of it, but it’s also the biggest problem with the film. Soo-hyun’s goal is not merely to kill Kyung-chul but to draw out his death for as long as he possibly can. He’s playing catch, torture, and release over and over until he finally gets to the point where Kyung-chul simply can’t survive any longer. At one point, before he cuts Kyung-chul’s Achilles tendon (and yes, this is as brutal and awful as it sounds), he whispers that the nightmare is only just beginning.

So I get it. The issue that I have with this is that Soo-hyun’s plan allows Kyung-chul to continue to track down victims, torture them, and potentially kill them. He does, in fact, rack up a sizable body count once he realizes that Soo-hyun is pursuing him. And I kind of don’t get this as well. When Soo-hyun finds Kyung-chul’s home and where he kills his victims, he finds evidence of a large number of victims. This is a guy who, while unpleasant even when not killing, has been smart enough to not just maintain a job, but a job that allows him access to the occasional prey. The minute he is compromised, he goes on a spree of violence, including attempting to rape and kill a young medical worker who has just helped to patch him up. This seems completely out of character for someone who at the very least has been cunning enough to avoid being caught or trapped.

This is definitely a case where I’m probably overthinking things. The movie isn’t about rational thought and it’s not supposed to be. This is all about revenge and presenting the viewer with some truly awful and terrible things. I Saw the Devil doesn’t hold back on the gruesomeness. It’s nasty, and that’s a large part of the draw, at least on the surface.

Despite the plot problems (and yes, they really do bother me), there’s something more at work here. On the surface, Kyung-chul is absolutely the devil. This is a character that would rank high in a list of the most evil film characters ever depicted and would certainly rank high if we eliminate anything that hints at or deals with the supernatural. And yet, I don’t think that’s what’s meant here. No, the devil may well be what Soo-hyun finds inside himself, this desperate need for the most terrible and painful vengeance he can devise. It’s something that destroys quite a bit more than Kyung-chul and himself. It becomes something terrible and all-encompassing, destroying everything and everyone it touches.

Is that the point? Or am I overthinking this again? There are some very good horror and thriller films that explore a similar theme in which vengeance doesn’t act as a cathartic but instead just causes more and more pain and destruction. I think that’s where this goes, and the real devil we see here might be something deep within all of us.

I Saw the Devil is not an enjoyable movie, and since it runs 142 minutes, it becomes a test of endurance more than anything. I’m calling this a win, but it just scrapes by because of how incredibly unpleasant this is. You’re 3 for 4, Nick, but just barely.

Why to watch I Saw the Devil: It’s terrifying and disturbing in a way most horror films are not.
Why not to watch: A few plot holes damage it some.