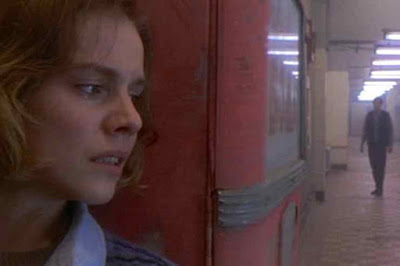 If you ever needed more evidence that Alec Guinness was a basass, the fact that his final movie credit was for a low-budget horror/thriller involving the concept of snuff films. Guinness evidently did the role—a single scene—as a favor to new filmmaker Anthony Waller on virtually no notice and did it without charging Waller for his time. The film in question is Mute Witness, which features one of the most tension-filled sequences in its first half hour it has been my pleasure to watch in some time. It’s worth noting that that’s true without the appearance of Guinness, who doesn’t show up until the middle of the film and is only in it for a couple of minutes there and at the end.

We open with what looks like a terrible and stupid slasher movie. A woman is getting dressed and a radio report comes on saying that there has been a breakout from a local lunatic asylum. And, of course, the escapee makes a sudden appearance in her apartment and sneaks into her kitchen for a knife. A stabbing follows, and then we get the single longest and stupidest death sequence in film history. It turns out that this is a movie set and the slashing we’ve seen is a failed take that didn’t work thanks to a language barrier. Our film-within-a-film director Andy Clarke (Evan Richards) is an American, but his cast and much of his crew is Russian, since this is being made in Moscow. Also on the set are Andy’s wife Karen (Fay Ripley) and Karen’s sister Billy Hughes (Marina Zudina), who is a make-up artist and completely mute.

While they set up for a few quick shots, the lights are pulled and the day’s shooting is over. Everyone packs up, but Billy is forced to return to the studio for something she needs to work on. As she is hunting for it, the studio is locked, and since she can’t talk, Billy obviously can’t call out for help or even attention. What she discovers is that a few members of the crew, Lyosha (Sergei Karlenkov) and Arkadi (Igor Volkov) have stayed behind to work on their own film project. At first, this looks like pornography, but it quickly turns sadistic and then murderous. Yep—they’re making a snuff film. Billy naturally freaks out, and what follows is a solid 10-minute cat-and-mouse sequence as Lyosha and Arkadi hunt for Billy in the huge warehouse of a studio space.

Eventually the police show up and Lyosha and Arkadi claim that they were merely testing the props. All of the evidence seems to be cleaned up as well. The police leave with some film and everybody else leaves. All of this brings in Larsen (Oleg Yankovskiy), an undercover policeman who has been searching for a Keyser Soze-like criminal mastermind called The Reaper (played by Alec Guinness). Larsen has infiltrated the Reaper’s collection of thugs and is working his way to the big boss, who runs a huge prostitution ring that dabbles in snuff films, since there are evidently people who pay through the nose for them. The film received by the police is, of course, not the real thing, but Larsen is convinced that Billy is telling the truth in all this and decides that she is in danger.

From the opening, Mute Witness goes from being a straight horror movie into a police thriller, and the last hour of the film, starting with the arrival of the police becomes something much more akin to a spy movie than a horror film. There are some more home invasions and a lot of death, but we jump from the knife-y slasher killing of the snuff film to more execution-style killings with silenced pistols. The shift in genre is sudden, but not immediately evident. It’s not until Billy gets attacked in her apartment that we’ve moved from the realm of horror to thriller.

Mute Witness does quite a bit pretty well. It does seem ludicrous that someone would have a massive snuff film operation going, but I took that with the grain of salt that was needed. It’s a pretty inventive thriller all the way through, though, and the horror elements early on (they pop up now and then later in the film) are as solid as you’re going to find for a low-budget film like this. The fact that our main character is mute brings in elements of classics like Wait Until Dark and often with the same sort of effect. The fact that the main actress is Russian and evidently didn’t speak any English is also neatly sidestepped this way, and Marina Zudina and Fay Ripley look just enough alike that they can pass for sisters.

Where Mute Witness falls down is when it tries to be funny. In fact, there are only a couple of humor moments that really work in the film—the initial “death” sequence of the actress who can’t figure out how to die properly and a moment when Billy is being attacked in her apartment and she tries to get the attention of a peeping Tom by flashing him. Most of the attempted comedy falls squarely on the shoulders of Evan Richards as Andy, and most of it falls completely flat. Having someone who is clueless and incompetent as main character traits wears thin very quickly, and that’s who he is for the whole film.

With a trim here and there to launch the comedy that doesn’t work, Mute Witness would be a true classic. As it stands, it’s still a tight little thriller that is definitely worth tracking down. It’s far better than its budget, and far better than a lot of movies with much larger budgets.

Why to watch Mute Witness: The first half hour is far better than the film’s budget.
Why not to watch: All of the attempts at humor fall pretty flat.