Film: Chaplin: The Movie
Format: Streaming video from NetFlix on The Nook. 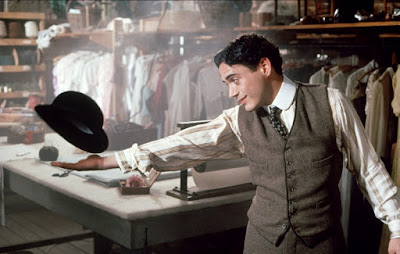 Robert Downey, Jr. is on top of the world right now, but this wasn’t always the case. The man had some dark years, which is what made him the perfect casting for Tony Stark—a likeable rogue with a seriously checkered and dark past. There was evidence early in his career that the man had serious talent. Exhibit A is Chaplin: The Movie (normally just called Chaplin). Downey plays the film star from the beginning of his career to his honorary Oscar in 1972, through all of the personal and professional trials that the man endured.

We start with a very young Chaplin in his vaudeville days, dealing with his mother who had bouts of insanity, and his years in the workhouse while his mother was unable to care for him and Sydney. Eventually, Chaplin worked on the stage before he was offered a high paying job making films in Hollywood for Mack Sennett. After creating the Little Tramp character, Chaplin eventually went out on his own and helped start United Artists, continuing to make films that featured his signature character.

While this isn’t a warts-and-all biography, it doesn’t shy away from Chaplin’s personal life. He was married four times and had any number of affairs with actresses, some of whom he cast (or tried to cast) in roles. The recurrent theme of Chaplin’s romantic encounters is that he had a penchant for being attracted to women who were just barely legal. All of his wives were barely able to legally marry, and even his final wife (to whom he remained married for decades) was just 18 when they were married. Chaplin doesn’t specifically judge him for this, but the film also doesn’t make any apologies or justifications for this.

What’s most interesting is Chaplin’s battle with J. Edgar Hoover and the FBI. According to the film, this began with Chaplin’s dismissing of Hoover at a party before Hoover had his eventual power. Much of Hoover’s animosity toward Chaplin was, at least on the surface, geared at Chaplin’s left-leaning politics and Hoover’s desperate attempt to tie him to one communist group or another. Each of Chaplin’s films (most particularly The Great Dictator , although Monsieur Verdoux was heavily criticized in this regard in reality) were probed for communist sympathies, and eventually, when Chaplin went to England to promote Limelight, he was not allowed back into the United States and forced to emigrate to Switzerland.

Downey is far and away the best part of this film. He managed to get a great deal of Chaplin’s schtick down and makes it work, especially early in the film. Chaplin is honest enough and, well, reverent enough to use actual clips from Chaplin’s great films throughout, but Downey is placed in the position of having to do some of the bits himself, and he acquits himself very well. It is in many respects a Chaplin-esque performance. Downey is both funny and filled with a kind of tragic pathos, the sort that Chaplin’s films really had.

What doesn’t work for me is the feeling present throughout the film that all of Chaplin’s ideas for great films came directly from a single experience. He sees downtrodden people during the Great Depression after a party and out comes Modern Times. He sees a German official at another party and sees a speech of Hitler and we get The Great Dictator. I’ve no doubt that a great deal of his work is autobiographical in some respects and also no doubt that films like those mentioned were reactions to the situations he saw, but the way the film depicts these events is that these masterpieces of film came specifically from a single inciting event.

As a whole Chaplin feels like it should be grander than it turned out to be. It is a stellar performance from Robert Downey, Jr., but almost everyone else is on screen so little that they leave almost no impression. With a couple of exceptions, people show up for a few minutes and then vanish, almost completely forgotten. Only Sydney Chaplin gets substantial screen time and dialogue, and to a lesser extent Douglas Fairbanks. Everyone else seems like a day player that showed up, said a couple of lines, and left the set.

As such, it’s a dandy reminder that while some good fortune has certainly helped Robert Downey, Jr. get where he is now, the man had some significant chops to use. As a biopic, it feels scattershot, and even for its nearly 2 ½-hour running time, it comes across as incomplete.

Why to watch Chaplin: The Movie: Robert Downey Jr. shows why he had such early promise as an actor.
Why not to watch: Beyond Downey Jr., there’s much less to recommend here.