Film: A Tale of Two Cities
Format: DVD from NetFlix on rockin’ flatscreen. 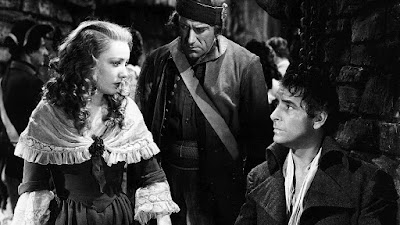 I don’t like the writing of Charles Dickens. I think it’s clearly evident that Dickens was paid by the word. Sure, some of the stories are pretty good, but they’re all so overwritten and based on coincidence that I just can’t get through them. That being the case, I can’t say I was thrilled with getting A Tale of Two Cities in the mail. In fact, I’ve gotten it twice in the last week; the first copy I got was cracked. I knew the basic story going in, just not the specific details.

The story starts before the French Revolution with the release of Dr. Manette (Henry B. Walthall) from the Bastille. His daughter Lucie (Elizabeth Allan) goes to him and finds a broken man in desperate need of rehabilitation. Since Lucie has lived without her father for the 18 years of his incarceration in England, she takes him there. Sharing the boat ride with her is Charles Darnay (Donald Woods), a young and idealistic French nobleman who has renounced his title. Darnay is the nephew of the detestable Marquis St. Evremonde (Basil Rathbone). Just so you know he’s detestable, he runs down a child in his carriage and then yells at the peasants for getting in his way. As it happens, Evremonde is the man responsible for Manette’s long imprisonment.

And, if you’re not convinced of Evremonde’s prestige levels in bastard, he plots against his nephew, sending word to his agent Barsad (Walter Catlett) to have Darnay arrested the moment he walks off the boat on trumped up charges of treason. His defense falls to C.J. Stryver (Reginald Owen), who relies on his hard-drinking associate Sydney Carton (Ronald Colman). Carton, using his own connections, contrives to find Barsad out drinking and gets him to admit that he has framed young Darnay. When he then confronts him in court, Darnay is freed of the charges. Stryver might get the accolades, but it’s Carton who did the hard-drinking work.

What follows is sort of a love triangle. Both Charles Darnay and Sydney Carton fall hard for the pretty Lucie, but since Darnay is respectable and Carton is a drunk, Darnay wins that contest, and the two are quickly married. Sydney hangs around as sort of a third wheel, pining for Lucie. And then the French Revolution breaks out with death to any and all nobles, especially those related to the Evremondes. Even their servants are fair game, and when Charles Darnay’s old tutor Gabelle (H.B. Warner) is captured, he is used as bait to bring Darnay back to France.

It’s here that we learn of the depths of hatred held for the nobility by the evil and twisted Madame Defarge (Blanche Yurka). Ironically, Defarge was the friend of Dr. Manette, but her hatred of the Evremondes is so great that she wants nothing more than their complete destruction. That means putting not only Charles on the guillotine, but also Lucie and their daughter. What, pray tell, can Sydney Carton do?

A Tale of Two Cities is a classic tale and the film does it pretty good justice to the story. A great deal of this comes from the career performance of Ronald Colman as Sydney Carton, a role he evidently wanted so much he was willing to shave off his trademark mustache. Colman was blessed with a butter-smooth voice that made him easy to watch, sort of a pre-James Mason James Mason. That voice makes everything he says sound important, and Carton is a debauched drunk, Colman makes him easy to like.

Colman is ably assisted in some smaller supporting roles. Lucie’s maidservant Miss Pross (Edna May Oliver) starts the film as an officious prig who threatens to become annoying but ends the film by going all mama bear on Madame Defarge. Aside from Colman, though, the film belongs in large part of Claude Gillingwater as Jarvis Lorry, the bank official who acts as the representative of Dr. Manette throughout the film. He’s fun when he’s on screen, and the film and story suffer a little when he’s not around.

It’s hard not to respect A Tale of Two Cities on some level. It is a grand tale, and for a film made in 1935, it’s told on a pretty grand scale. The money scene is the storming of the Bastille, which still looks pretty good. According to the opening credits, these sequences were filmed by the great team of Val Lewton and Jacques Tourneur, which only makes me like them more.

If I have a major complaint, it’s that the film has suffered some degradation in the 80 or so years since it was created. There are a lot of missing frames throughout the film, so while the dialogue never skips, the picture itself skips pretty frequently, and it’s disconcerting. I can forgive the sped up footage during the Miss Pross/Madame Defarge catfight and I can forgive the bad rear projection at the end. And really, it’s not the film’s fault that frames are missing. It just makes things hard to watch.

Really, though, this is a serviceable version of the Dickens tale elevated by a passionate performance by Ronald Colman. I probably won’t watch it again, but I liked it more than I thought I would.

Why to watch A Tale of Two Cities: Well, it is a classic story.
Why not to watch: There are a lot of frames missing.