What Color is Your God? 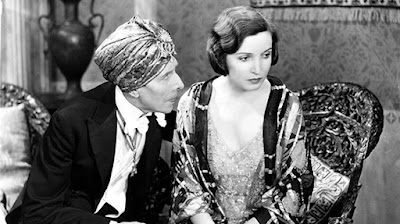 I’m always happy when a rarity pops up on Turner Classic Movies because it’s just that little bit closer to seeing everything on my various lists. There are a few awards in a few years that are particularly difficult in locating films including Best Actor 1929-1930. This made The Green Goddess doubly important for me. It’s also a good reminder of what I go through for this project because this is not a film that anyone else really needs to see. Oh, it’s not terrible or disturbing or offensive (at least not very). It’s just not very good.

In fact, the main thrill of The Green Goddess is that it’s in sound. It was apparently George Arliss’s first talkie, but he convinced the studio to hold it back until Disraeli debuted, thinking that would serve him better as his first released talkie. The Green Goddess is a remake of an earlier silent that also starred Arliss, so at least in terms of the part he was treading on familiar territory.

As an early talkie, the plot here is pretty simple. A trio of high-toned Brits are flying in a biplane and are suddenly forced down in the middle of nowhere. The three are stuffy officer Major Crespin (H.B. Warner), his estranged wife Lucilla (Alice Joyce, who played the same role in the original silent) and Dr. Traherne (Ralph Forbes), who is also the pilot. After a few minutes wandering, some flailing about trying to communicate with the natives and a nearly-international incident caused by Major Crespin sitting down on a native god (ah yes, how progressive) they figure out that they are in the kingdom of Rukh, near the Himalayas and close to India.

How fortunate, then, that the Raja (George Arliss) speaks fluent English. Our outsiders have arrived at a propitious time for him. See, the British authorities in India have recently captured and tried three criminals from Rukh who committed a murder. The three are set for execution in the next 48 hours and all three are half-brothers of the Raja himself. While he confesses that he has no great love for his half-brothers, the people do and will demand a certain amount of recompense for their executions. A trade of hostages is no on offer. No, the people will demand three executions of their own, and what luck…three Brits happen to fall from the sky. The Raja essentially tells them that the fates of Major Crespin and Dr. Traherne are sealed, but for Lucilla Crespin, another possibility awaits. Should she consent to marry the Raja and give him an heir, her life will be spared.

That’s really all there is to it. The Raja mugs for the camera quite a bit, drops a few current phrases, and basically teases the three people in his charge with the possibility that he might be serious, might be playing an elaborate joke on them, and won’t tell them one way or the other until the last minute. He’s completely serious about wanting to bed Lucilla, though, and even offers her the possibility of bringing her children to Rukh so that she can enjoy married captivity with them.

What’s not surprising here for a film created in 1929 is the level of ethnocentrism. There’s actually a dig at this when the Raja shows up. With a smile, he tells our British soon-to-be prisoners that he knows he’s a barbarian, but that his civilization has lasted for thousands of years, and that the sword on his hip was used by one of his ancestors when their ancestors were still painting their faces blue. It’s a nice little jab, but it’s the only one. Everything else in the film hammers on the fact that the Raja and his people aren’t European and are therefore inferior to our three British heroes. After all, they worship a green goddess and still believe in the idea of “an eye for an eye,” and so despite the Raja’s extensive library and up-to-date technology, there’s something terribly bad about him. The plot plays that up, too. Why else would the Raja demand Lucilla give in to his carnal desires? It’s because of the inherent desirability of white women. He even says that a son with her would be moved to the head of the succession because of the superior “civilized” genetics.

Really, the only thing worth seeing here is George Arliss, and this isn’t his best film from this year of release. He absolutely makes a meal of the role he’s given, though. It’s evident that he’s enjoying the hell out of himself on screen.

And really, that’s it. Everyone else here is wooden, convinced of his or her superiority, or both. I suppose that also makes it interesting as a cultural snapshot, but this isn’t something that needs to be sought out or seen. See what I go through for you?

Why to watch The Green Goddess: George Arliss is having way too much fun.
Why not to watch: There’s nothing else worth seeing here.