Film: The Visitor
Format: Streaming video from Hoopla Digital on The Nook. 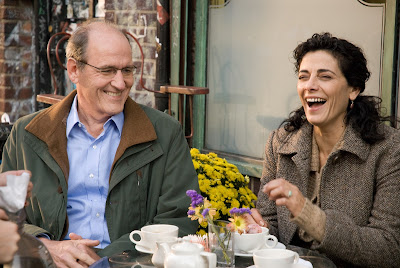 In a real way, all drama is personal. The biggest science fiction action movie or war film, boiled down to its core essence, is a personal drama. A film like The Visitor strips all of that away and gives us just that focus on the small drama, the personal moments that make up a life. We start with perhaps the most disconnected person in recent years, someone who is living in the world but not a part of the world, and through the story of the film, reconnect him back with a world that is real and vibrant. Real life is hard and The Visitor doesn’t shy away from this. Being disconnected is safe but lonely and boring. Connection brings life and vibrancy and joy, but it also brings pain, loss, and disappointment.

Walter Vale (Richard Jenkins) is a professor of economics who is completely detached from everything around him. He goes through the motions, connecting with no one. We slowly learn that he lives alone because his wife, a concert pianist, has died. He tries to connect to her by taking piano lessons, but is constantly dissatisfied with both himself and his series of teachers. To everything else, Walter is not really a participant but an observer. He teaches only one class and can barely be bothered to teach it. One of his students complains that he still hasn’t handed out the syllabus.

Things change for Walter when he is forced to go to an economics conference and present a paper that he co-authored with a colleague. In truth, the colleague wrote most of the paper but is unable to attend, and despite his misgivings, Walter has no choice in going. He and his wife kept an apartment in New York that he has dutifully continued to pay for but has not visited in some time. He goes to the apartment and finds a couple living there, having “rented” it from someone else who has obviously scammed them. The couple, Tarek (Haaz Sleiman) and Zainab (Danai Gurira) are thus living in Walter’s apartment illegally, but completely innocently.

After asking them to leave, Walter has a change of heart and decides to let them stay. Zainab seems unsure of Walter, but Tarek is extremely open and seems willing to bring Walter into his world of music. Tarek, a djembe player, starts to teach Walter how to play, and Walter starts to almost enjoy himself in those moments when he can be lost in the music.

Trouble happens when Walter and Tarek are returning from playing the djembe in Central Park. Tarek, after paying his fare, gets stuck in the turnstile and forces his way through. He is immediately arrested for fare jumping. It turns out that he is an illegal immigrant from Syria and Zainab is illegally in the country from Senegal. Walter feels some responsibility and hires a lawyer to plead Tarek’s case, but Zainab is uncomfortable around him and leaves to join her family in the Bronx.

Enter Mouna (Hiam Abbass), Tarek’s mother, who lives in Michigan. She reveals that Tarek’s father was a journalist killed for his involvement in a political movement in Syria. She is also in the country illegally and therefore cannot visit her son, but she is naturally worried about Tarek’s fate if he is deported. Eventually, she begins to trust Walter and eventually comes to live with him in the New York apartment, replacing her son and Zainab.

There’s a lot going on in The Visitor, and the film is well-written enough that many of these different threads are working under the surface to great effect. On one level, this is what I said it was at the top—it’s about a man who has lost connection to the world around him and who, through the course of the narrative, is slowly pulled back into connecting with that world. The pains and frustrations of the real world that had no real impact on him suddenly do again, but those pains are more than paid for by moments of real connection to other people.

This is also about immigration in some respect. The fates of Tarek, Mouna, and Zainab are all constantly in flux because they are in the country illegally—their very existence on American soil is illegal. Since all three are also Muslim in a story that takes place in the decade after 9/11, this becomes an important point as well. It’s a point that, almost a decade later is still relevant. Tarek’s religion and country of original make him a perceived threat when all he really wants to do is play the djembe and live his life. He’s being penalized not for who he is, but who he evidently represents, or for the idea of who he might be.

All four of the main roles are beautifully acted. This is a film that does good work with the dialogue and has actors that do equally good work with communicating beyond the dialogue. Zainab’s discomfort with Walter is constantly evident at every moment—she never lets her guard slip. Tarek is a man who is completely open and accepting of everything and everyone, the sort of person who never stops talking but also never stops listening to everything around him.

That said, this is a film that belongs completely to Richard Jenkins. Jenkins has always been a great character actor, someone equally at home in a comedy or a drama. He has an everyman quality to him that makes him immediately relatable, and in The Visitor, we get a sense of his detachment to everything within the first couple of minutes. We know exactly how he feels long before he ever tells us, and when he does have that big reveal moment, he doesn’t tell us anything in words that he hasn’t already told us in virtually every frame of the film before.

This really is a beautiful human drama. It’s happy and sad and funny and tragic and human. It’s worth your time.

Why to watch The Visitor: Under the skin, we’re really all the same.
Why not to watch: This is the definition of a movie that is small in scope. If you’re in the mood for something big, brassy, and exciting…this isn’t it.