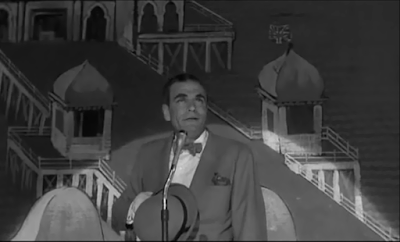 Every generation has its own greatest actor. A couple of generations ago, that greatest actor was Laurence Olivier, who, despite that appellation, won only a single competitive Oscar in his career. He was nominated plenty of times, though, and since this is Olivier we’re talking about, I’m not going to be the person who says he didn’t deserve all of the acclaim he got. For me, thinking of Olivier immediately calls up images of Shakespearean dramas, which makes a film like The Entertainer not specifically a departure from his career, but a departure from what I think of when I think of him.

The Entertainer is the story of Archie Rice (Olivier), a Vaudeville-style performer whose career has been dying for years and is hanging on by the smallest thread. He has a show in a seaside resort town in England that is drawing smaller and smaller crowds that are becoming less and less enthusiastic. When the movie starts, his daughter Jean (Joan Plowright) has returned to the town. Her brother Mick (Albert Finney in his screen debut) has just shipped out to the Suez Canal, a hotspot at the time. Her other brother Frank (Alan Bates, also in his movie debut) helps out with the show and is somewhat in awe of his father.

Rice’s show is, technically, already dead. He owes all of his cast and crew money and his creditors are increasing their pressure on him to pay up with money he doesn’t have. His wife Phoebe (Brenda de Banzie) is a drunk and is aware of Archie’s nearly constant infidelities. Archie’s father Billy (Roger Livesey), a former entertainer himself, lives with them and seems to be immune to all of the family drama going on around him at all times.

The Entertainer is very much a character study of Archie Rice. Archie is desperate to stay in show business, to make it as a star or at least as a name. It’s evident that the money isn’t important with him—it’s the acclaim and attention he craves. Nothing is too demeaning if it means that he gets people looking at him. He treats his relationships the same way. With Phoebe buried in booze, Archie sets his eyes on Tina (Shirley Anne Field), an aspiring actress who came in second in a swimsuit competition that Archie emceed. Desperate for anything to keep him in the game, Archie begins an affair with the girl and promises her a place in his next show, especially since that promise brings in the financial backing of Tina’s parents.

Through all of this is what seems to be a minor subplot, but is actually something on which a great deal of the film turns. Archie’s son Mick is captured at the Suez Canal and is lauded as a hero. While the rest of the family sits on pins and needles for any word on his repatriation, Archie seems oblivious to everything that is going on around him that isn’t connected with his current show or the one he wants to eventually produce. Slowly, as the film continues, the noose is tightened on Archie and on the world that he has built for himself, a world in which he has already failed in a significant way. His desperation to be the center of attention blinds him to everything else going on around him, including the capture of Mick.

The film is a study of Archie Rice, but it’s in many ways a study of his daughter as well. Jean has the ability to see through all of the facades that her father puts up, and a great deal of her time on screen deals with her coming to terms with the man her father actually is rather than the one he wants everyone to believe he is. Jean loves her father, but she is also constantly disappointed in him and in the choices he makes. As the problems mount and the film builds, it’s Jean who is capable of making decisions in her life—the kind that Archie is probably aware he needs to make but is unable to because of his need for all eyes on him.

This is a truly remarkable cast. Olivier was great, of course, since he generally was. Albert Finney is in the film for too short a time, sadly. It’s hard not to appreciate Alan Bates here, and while it’s fascinating to see Joan Plowright—ever the dowdy but snappish dowager—looking positively youthful. Additionally, Roger Livesey is one of my favorites from this era. I like seeing him in just about anything.

There are a couple of weird moments in the film when compared with reality outside of it. In one scene, Archie asks Jean if she would be upset if a man of his age married a woman of hers. That’s interesting not in and of itself but because Olivier did marry Joan Plowright, and the two stayed married until he died. Another odd thing like this is the fact that Roger Livesey, who plays Olivier’s father, was a year older than Olivier.

This is one of those films where everything goes to smash. That’s the point, and it’s beautifully acted getting us there. The biggest downside to the film is the fact that this was originally written for the stage and originally starred Olivier on the stage. I won’t say he’s bad in the role because he’s not. But he’s also playing The Entertainer as if he was on an actual stage. There’s not much aide from a few locations that makes this feel like a real movie.

The Entertainer isn’t a happy film, but if you’re a fan of good, powerful acting, you could do a lot worse than the cast assembled here.

Why to watch The Entertainer: A marvelous cast at the top of its game.
Why not to watch: This is based on a play and it plays like it’s on the stage.