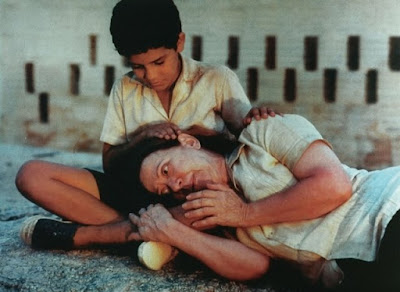 I complain a great deal on this blog about plots that follow a very specific, outlined plan that is obvious from the outset. A film that has a plot that I’ve seen before is working at a disadvantage from me since seeing the same thing over and over isn’t something very interesting. There are exceptions, of course. There are movies that follow a plot where I know all of the emotional beats and have a very good idea of what’s going to happen and the film still works. Central Station (Central do Brasil) is such a film. There’s not much here that you haven’t seen before, but the film itself is well-made with a great deal of heart, and that solves a lot of problems.

Central Station is a road movie and an odd couple movie, and it follows those conventions in the main. We start with Dora (Fernanda Montenegro), a former school teacher who now set up a small stand at the central train station in Rio de Janeiro. What she does here is write letters for the substantially illiterate Brazilian population, charging a couple of dollars for the service. Honestly, that’s what the subtitles say. My guess is she’s probably charging 5-10 reals. Anyway, at the end of the day, Dora returns home and reads through the letters she has written with her friend and neighbor Irene (Marilla Pera). Some she sends, some she stores to potentially mail later, and some she decides to tear up.

One day she has a repeat customer, a woman and her young son Josue (Vinicius de Oliveira). Previously, the woman had written a letter to her husband, who she hadn’t seen for years, claiming that her son wanted to see him. This second time, she wants a new letter, with a much softer tone, not accusing her husband of being a drunk and expressing her own feelings at wanting to see her husband again. A minute later, when leaving the train station, the woman is struck by a bus and killed, leaving Josue parentless and homeless.

Feeling a sense of responsibility, Dora takes charge of Josue, and with the influence of the train station’s security, takes him to the home of a woman who apparently traffics in abandoned children. When Irene makes her feel guilty, Dora returns and steals Josue back and then decides to take him to see his father, who lives in the northeast corner of Brazil. Off they go, and as is standard at this point in a narrative like this, they don’t like each other.

We’re going to get the standard problems that crop up. Josue loses all of Dora’s money by leaving it on the bus. They get to where Josue’s father Jesus lives only to find that he is no longer there, requiring another bus trip. Eventually, Dora and Josue find Jesus’s other sons, Isaias (Matheus Nachtergaele) and Moises (Caio Junqueira), and by this time, they have grown quite fond of each other, which potentially causes a problem for what will happen to Josue next and where all of this leaves Dora.

Like I said, it’s pretty standard stuff. You know the beats that will happen here, and while the solutions to some of their problems are pretty interesting, they aren’t that unique or even that surprising given what we know about Dora. There’s nothing here in the way of the story itself that is at all unusual or even that unique, save for the fact that everyone is speaking Portuguese.

What works are the characters and the performances. Fernanda Montenegro is considered the grand dame of Brazilian acting, and if Central Station is any indication, she is considered thus for very good reasons. Dora is someone who is truly motivated by wanting to do the right thing by Josue, both from some latent maternal instinct and due to guilt. She is in no way responsible for the death of the boy’s mother, but she does seem to feel responsible for it, and this is what continues to move her forward.

What does work for me is the ending in particular. This needs to be under a spoiler tag, though.

At the end of the film, Josue’s brothers tell her that Jesus left them a letter that neither of them can read, and they ask her to read it. She does, and says that the letter claims that he has always loved Josue’s mother and that he wants her to return to him, and they will live together with all three of their sons, naming them all, including Josue. However, we never see the letter. We have only Dora’s statement that this is what the letter contains, and it’s entirely possible, perhaps even likely, that she’s made the entire thing up.

So, while Central Station is no big shakes when it comes to the story, it is exceptional when it comes to its characters and especially the performance of Fernanda Montenegro. She’s great throughout the movie, and transcendent in the last 20 minutes. If you don’t mind subtitles, you could do a lot worse.

Why to watch Central Station: Fernanda Montenegro is a name you should know.
Why not to watch: No good reason unless you’re someone who refuses to watch subtitled films.