Wednesday Horror: The Other

Films: The Other
Format: DVD from NetFlix on rockin’ flatscreen. 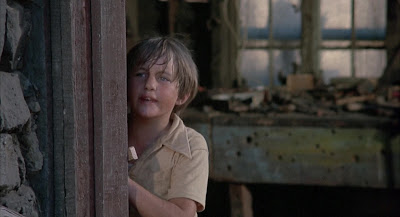 When you see the poster for 1972’s The Other, it comes as no surprise that we’re going to be diving into the “evil child” subgenre of horror film. We will be treading much the same ground as in films like The Bad Seed or Village of the Damned. This is a member of another odd little subgenre, though: the evil twin movie. Yep. Two subgenres for the price of one.

Our twins are Niles and Holland Perry (played respectively by Chris and Martin Udvarnoky, neither of whom ever made another movie). We learn quickly that Niles is the good twin and Holland is the, well, initially mischievous twin and eventually the evil, murderous one. The two boys live in a farmhouse with their infirm mother (Diana Muldaur), their Aunt Vee and Uncle George (Norma Connolly and Lou Frizzell), the boys’ pregnant older sister Torrie (Jenny Sullivan), her husband Rider (John Ritter!), and their grandmother Ada (Uta Hagen). Also in the house is their cousin Russell (Clarence Crow), who they call Piggy Lookadoo. There’s no love lost between the twins and Russell.

Things seem normal until they really aren’t. Niles has an old tobacco tin that he uses to store various treasures including a ring. We discover eventually what is so important about the ring, but I’m not going to drop into spoiler territory with that. Russell discovers that Niles has the ring, though, and shortly after that, Russell, while jumping off the hayloft into the hay below, lands on the upright pitchfork.

Tragedy never seems far away from the Perry family. Shortly after this, their neighbor, Mrs. Rowe (Portia Nelson) dies of a heart attack and goes for a few days without discovery. Their mother finds the ring and confronts Niles about it, and she takes a tumble down the stairs and is partially paralyzed.

The other thing that is worth noting here is the relationship between Niles and his grandmother Ada. Ada has instructed him in something she calls “The Great Game.” Essentially, Niles is capable of projecting himself outside of his body and into something else, allowing him to see what other people are doing while hidden (he uses this to learn a magician’s secrets) or to experience life as a bird or other animal. Around the midway point of the film, we discover that Niles has the ability to project himself into quite a bit more than that, but again, that gets us into spoiler territory.

One of the most interesting things about The Other is that Niles and Holland are never on screen at the same time. They share a number of scenes, but we never see both of them in the same shot. This led to a number of people suspecting that director Robert Mulligan had used one child in a dual role, but that was evidently not the case. The mid-film reveal makes this decision an interesting and telling one, and it demonstrates that Mulligan may have put more than a little thought into what is essentially a cheap thrill movie.

That it’s cheap doesn’t really affect the film that much. No, there are other places where The Other doesn’t quite work that well. The big thing is the entire idea behind the Great Game. I understand why it is included here, but for where the plot wants to go, it’s not really necessary. It’s not used that much and serves mainly to give the story a connection to the supernatural that it doesn’t really need. Very little would need to change in the film if it were eliminated entirely, and the big reveal would work pretty much exactly the same way. In fact, it might even be more effective without it.

It’s also surprisingly tame. I’m not expecting a full face-melting gore fest here, but for a film that trades on horror, we don’t really ever see anything. The decision seems to be of the nature that what we don’t see is more terrifying than what we do, but what we don’t see here is pretty much everything. There’s room for a little more, even just for shock value in a couple of places.

Why to watch The Other: A good entry in the “evil child” subgenre.
Why not to watch: It tries for upsetting more than scary and doesn’t really get there.

Email ThisBlogThis!Share to TwitterShare to FacebookShare to Pinterest
Labels: horror, Robert Mulligan, The Other, thriller