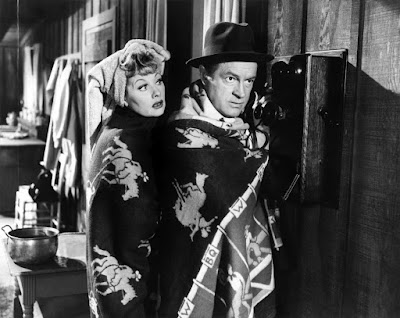 Infidelity has long been a plot point in plenty of movies, but I’m not sure how often it was used specifically as a point of comedy in the formative years of Hollywood. The Apartment, which trades a great deal on infidelity and is at least partially a comedy came out in 1960. In this case, though, it wasn’t the main characters who were cheating or being cheated on (okay, one character was a part of a relationship like this, but she wasn’t married). I’m sure I’m wrong in this, but it feels like in creating main characters who are cheating on their spouses in a comedy might have started with The Facts of Life, which also came out in 1960.

Like I said, I’m sure I’m wrong. It feels so strange, though. Comedy infidelity moments happen in movies all the time these days, often as a way to move one character forward in his or her (but generally it’s “his”) personal journey. But it still feels like a rare thing to have the characters we are supposed to like and want to spend time with being the ones doing the cheating in a comedy. There are examples (A Fish Called Wanda springs to mind), but still feels rare.

Unfaithfulness in movies is rarely seen as a positive thing. It’s a quick shorthand in movies to make someone unlikable by making them someone who cheats in the relationship. If there’s a character we’re not supposed to like, make him or her a serial adulterer, especially in comedies. Even more specific, in movie relationships in comedies, married guys get cheated on and use this discovery as a springboard into discovering themselves, a sort of spur to self-actualization. Married women in comedies don’t get cheated on as much, but women in comedies who have fiancés often do, mostly to get them out of a horrible relationship with an asshole and into one with the main character of the comedy.

So, there’s a lot right off the bat that is odd with The Facts of Life. Here, we have two married people who, through a series of circumstances, end up falling for each other despite being married to other people. A further weirdness is that we’re not talking about couples in their late 20s or early 30s. Instead, we’re talking about Lucille Ball, who was almost 50 and Bob Hope, who was inching close to 60.

So here’s the pitch. The movie starts with Kitty Weaver (Lucille Ball) and Larry Gilbert (Bob Hope) planning on going away for a weekend together despite being married to other people. We jump back in time to discover just how all of this happened. As it turns out, Kitty and Larry start out disliking each other. They happen to run in the same social circles and Kitty is good friends with Larry’s wife Mary (Ruth Hussey). Larry and Mary, along with Kitty and her husband Jack (Don DeFore) have an active social life together along with a third couple, Doc (Philip Ober) and Connie Mason (Marianne Stewart). In fact, the three couples even vacation together.

As they prepare for their joint vacation to Acapulco, a few events happen at the same time. Kitty tries to get frisky with Jack, but he falls asleep, and it’s also established that he has a bit of a gambling problem. Larry tries the same with Mary, but she shuts him down. Then, the next day when they are preparing to leave, one of Larry’s and Mary’s kids gets sick, and she decides to stay home. Simultaneously, Jack gets called away on emergency business, which means he can’t go, either. Once the four remaining vacationers get to Acapulco, Doc and Connie are immediately stricken with Montezuma’s Revenge, leaving Larry and Kitty together. Naturally, they spend their entire vacation in each other’s company, and, bonding over a long battle with a marlin while sport fishing, they fall for each other.

The rest of the movie, more or less, concerns Larry and Kitty still being madly in love with each other while trying to hide it during their frequent social outings as a part of the same group. I have to admit, there’s a great deal of comedy potential in that situation, even if it seems odd in a lot of ways to make our cheating pair the protagonists.

I guess more than anything, that’s what strikes me as odd about The Facts of Life. It’s not a bad movie, even if the humor doesn’t always carry through. Bob Hope was, much of his time on camera, Bob Hope. He tells corny jokes and he lives on the one-liner. Lucille Ball was a tremendous comedian, and she’s the best thing here because it doesn’t feel like she’s trying so hard to be constantly funny. But there’s something very tonally off about this movie. For something made in 1960 and meant to be a good, clean laugh riot, it feels oddly oily.

Why to watch The Facts of Life: Lucille Ball was always worth watching.
Why not to watch: It just seems so strange in tone.