The Place Before Peyton 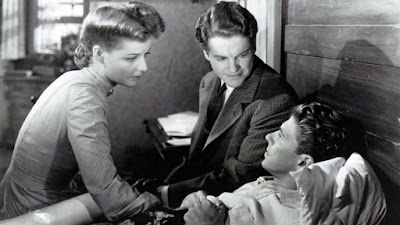 When I think of movies from the 1940s, I tend to think of film noir and films that did what they could to tweak the Hays Code. I tend to forget that there was still a strong streak of melodrama in those years. I was thoroughly reminded of that with Kings Row, one of the soggiest melodramas you’re likely to run across. In this case, that’s not necessarily a terrible thing. Oh, Kings Row is all about the banks of strings playing intensely whenever something emotional happens, and there’s going to be plenty of extreme events to ratchet up those emotions, but there is a difference between a melodrama that’s just drippy and one that is interesting.

So what makes Kings Row interesting? A couple of things. First, this was the picture that made Ronald Reagan a star. He wasn’t able to capitalize on that because he was drafted around the same time as its release. Some would suggest it’s his best movie. Since he was also in Dark Victory I think that’s a stretch, but it’s almost certainly his best performance and his best role. It’s also a film that has had a unique impact on popular culture. If you listen to the main theme, it sounds vaguely familiar. This is because John Williams used it as his inspiration for the main theme for Star Wars.

We’re going to start with our five main characters as children in about the 1890s to set them up and quickly move into those same five as young adults. They are Parris Mitchell (Scotty Beckett, then Robert Cummings), wealthy orphan Drake McHugh (Douglas Croft, then Ronald Reagan), Cassandra Tower (Mary Thomas, then Betty Field), Louise Gordon (Joan Duvalle, then Nancy Coleman), and Randy Monaghan (Ann E. Todd, then Ann Sheridan). Parris and Drake are best friends. Parris is sweet on Cassie, who seems to reciprocate those feelings, while Drake is a bit of a player, attracted to both Louise and the tomboyish Randy. Louise and Cassie are rivals, and when they plan a party on the same day, Louise wins the popularity contest, with more kids going to her party. After the party, Cassandra’s father (Claude Rains) pulls her aside and removes her from school, shutting her up inside the house. We also learn that Louise’s father (Charles Coburn) is also a doctor, and seems to use his power as a doctor to punish people he thinks deserve it.

So, fast forward to our adult versions. Parris has aspirations of becoming a doctor and decides to study under Cassandra’s father, who is a non-practicing doctor. He rediscovers Cassie, who seems to be unable to deal with much outside of her house. Meanwhile, Drake has been going around with Louise despite the clear disapproval of her father. Okay, so this is all set-up. Let’s get to the melodrama. Parris is going to study psychiatry in Vienna and more or less proposes to Cassie, who freaks out. She then begs Parris to take her away with him, but he says he can’t. That night, Dr. Tower poisons her, then shoots himself, leaving everything he has to Parris. Digging into Dr. Tower’s notes, Parris finds out that Cassie’s mother was fully insane and Dr. Tower saw the signs of the same insanity in his daughter and killed her to prevent her from ruining Parris’s life the way his wife had ruined his. Cue strings.

So we’ve got that melodrama working for us; now we need to bring in the other people. Drake confronts Louise’s parents, who basically tell him to go piss up a rope. Louise refuses to go against her parents’ wishes and drops off the map, so Drake takes up with some other women in town until he reconnects with Randy, and the two become an item. Eventually, Drake reaches the age of his inheritance, but a crooked banker steals his money and vanishes, forcing Drake to get a job at the train station. An accident pins him between two train cars, and Dr. Gordon, Louise’s father is called in and decides to amputate both of Drake’s legs, despite the fact that he may have been able to save the legs. Remember, he liked to punish people for what he saw as transgressions. Undaunted, Randy marries him, and Parris, freshly educated in psychiatry in Vienna, rushes home only to find that a new family—from Vienna, and with a 19-year-old daughter (Kaaren Verne) have moved into his old house.

Will Parris be able to rescue Drake’s shattered psyche? Will he have Louise committed to an institution to prevent her from breaking up Drake’s and Randy’s marriage? If it weren’t a movie, this would be the cliffhanger, but since it’s a movie from 1942, we’re going to get the ending we’re supposed to want.

So let’s talk about this. It is a melodrama for the ages, and that’s the biggest strike against Kings Row. Dr. Gordon, who evidently had a habit of operating on people without anesthetic to punish them, is such a crazy character that could only exist in a film like this. I see that I forget to mention Parris’s grandmother (Maria Ouspenskaya), who naturally hides her cancer from her grandson until she dies just before he leaves for Vienna. Betty Field’s performance is singularly manic and wild-eyed, making her the sort of character that causes me to wonder what Parris sees in her outside of a pretty face. Again, cue strings.

And yet, it’s not terrible. Ronald Reagan and Ann Sheridan as a couple are absolutely the best part of this. Say what you will about Reagan (and I’m happy to talk shit about his politics and presidency), he was able to bring it when he needed to. Ann Sheridan even drops some old school gender politics here that come off as almost sarcastic, telling Drake that she is merely a woman when she is, with the audience’s knowledge, clearly leading him in a direction to get him out of his depression. The film loses vibrancy when either of them is off screen, or perhaps gains some when they are on it.

Kings Row isn’t great, but it’s not terrible. With less melodrama, it would be a lot better than it is, meaning that it managed to survive Sam Wood’s heavy emotional hand.

Why to watch Kings Row: It’s pretty good despite the melodrama.
Why not to watch: It is the drippiest of drippy melodramas.