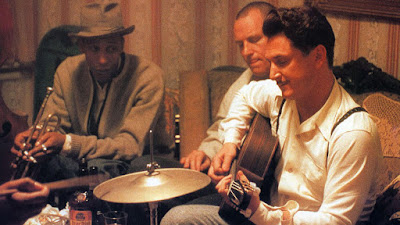 Before I get into the nuts and bolts of Sweet and Lowdown, I feel like I should go through my own history with Django Reinhardt, who plays a significant part of the plot. Back in my college days, my roommates and I lived under a quintet of nursing students. They kept weird hours, which included them blasting metal at 2:00 in the morning. In retaliation, one of my roommates and I used to turn our speakers toward the ceiling and blast Django Reinhardt and similar music in the middle of the day. Petty, sure. But funny.

Anyway, Sweet and Lowdown is a fictionalized version of the life of guitarist Emmet Ray (Sean Penn), who considers himself the second-best guitarist in the world, second only, in fact, to the fabled Django Reinhardt. He also considers himself one of the greatest pool players in the country as well as one of the best poker players around. In fact, in Emmet’s mind, there is nothing that he can’t do. The truth is that he can’t keep to a budget, show up to a gig on time, or sober, or sometimes show up at all.

Sweet and Lowdown is set up like a biopic. Writer and director Woody Allen shows up to offer commentary on the life of Emmet Ray along with a few other notable jazz experts, who comment on the various stories about Ray that have been passed down through legend. Like a few of Allen’s other films, Sweet and Lowdown is interrupted in spots to provide this sort of documentary commentary about the man in question. As should be expected with a Woody Allen film, this is all done seamlessly and deadpan, disguising the fact that Emmet Ray is someone entirely fictional, as is the entire story.

Truthfully, this is a Jazz Age, Americanized version of La Strada, more or less told from the perspective of the Anthony Quinn character. It’s also a film that illustrates the unique genius of Woody Allen. In one of the first scenes, we learn that Emmet is late for another gig and is currently being hustled at pool. We also learn that he’s working as a pimp in addition to playing the guitar. One of his girls shows up and tells him that a john dropped dead of a heart attack. She left, leaving nothing to connect her to the dead body, but thinks that the man might have had one of Emmet’s business cards.

In anyone else’s hands, that’s your movie. We have a guitar playing pimp who needs to get to the scene of a death to remove something that might connect him to that death even though no murder has been committed. I’d probably watch that movie. For Allen, this is just an event used to help create and build the character of Emmet Ray, and the whole sequence goes nowhere. It’s a throwaway moment meant to establish what sort of person Emmet is.

Much of the movie is spent on the relationship between Emmet and Hattie (Samantha Morton, who was nominated in a supporting role). From this relationship, we learn quite a bit about Emmet. He’s a misogynist, dismissive of pretty much everyone, and convinced of his own genius. Hattie falls for him anyway, and this is the one place where I have a problem with the movie. It’s likely that Hattie, who is mute and works as a laundress, has some self-esteem issues, especially as a mute person in the 1930s. But Emmet is really a terrible person in general, and he’s pretty terrible to her specifically. As for Morton in the role, she’s fine, but she’s also not asked to do a whole lot. I like Samantha Morton as an actress. She has an expressive face and eyes, which are needed for a role without lines, but there’s also not a great deal to the performance.

The big issue here is just how unlikeable Emmet Ray is. Literally his only good quality is the fact that he’s a genius guitar player. Everything else about him is terrible. He’s so terrible, in fact, that he eventually marries a woman named Blanche (Uma Thurman), who consents to the match specifically because she is an author and wants to study Emmet to use in her writing as a character. Aside from the guitar, his hobbies are watching trains and shooting at rats in junkyards. He is constantly telling everyone he can about his own genius and how wonderful he is, no one better, with the possible exception of Django Reinhardt. Okay, his relationship with Reinhardt is entertaining as well. According to the legend put forth in the film, Emmet Ray was so in awe of Django Reinhardt that every time he saw him in person, he fainted.

Sean Penn’s performance is why I watched this, and here I’m torn. Penn is a fine actor and often turns in a performance of note. It’s hard to say he’s not very good as Emmet Ray, but it’s in service of such an awful character that it’s a little difficult to appreciate. I genuinely didn’t like spending time in the company of Ray because he is so unpleasant on almost every front.

The exception to that is the music, which is tremendous. The music saves this as much as it can, but this is a case where I’d rather listen to the soundtrack than watch the movie, and that simply can’t be a good thing, can it?

Why to watch Sweet and Lowdown: The music is great.
Why not to watch: Emmet Ray is not the kind of person you’d like to know.