Room Service with a Side of Bullets 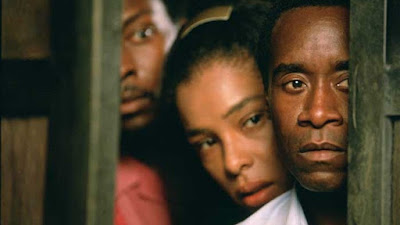 I’d love to tell you that I’ve not watched Hotel Rwanda before today for some reason other than I didn’t want to watch Hotel Rwanda, but that would be a lie. The truth is that I didn’t want to watch this movie for exactly the reasons that you can guess I didn’t want to watch it. If’ I’ve reached a point of surfeit with the Holocaust in film, why would another genocide be more palatable? Movies like Hotel Rwanda are important; we need to see things like this and like The Killing Fields because if we aren’t regularly reminded of just how terrible the human race can be, we’re more likely to suffer the same atrocities again. That’s absolutely true, but I don’t have to like it.

So, yeah, we’re talking genocide here. Specifically, we’re talking about the attempted genocide that happened in Rwanda between the Hutu and Tutsi people. While the concept of genocide is already something that makes every possible lobe in my brain hurt, the Rwandan massacre is particularly bizarre and incomprehensible because of the similarity between the Hutu and Tutsi people. They are pretty much literally the same. They have the same language, the same cultural background, the same religion. Evidently, the Tutsis are a little taller. But there is no real difference between them. It is almost literally like people with innie belly buttons deciding that the people with outies are evil traitors to everything good and right in the world and need to be slaughtered with machetes. It’s that insane.

Paul Rusesabagina (Don Cheadle) is the manager of a hotel in Rwanda. The hotel, owned by the Sabena corporation in Belgium, is a four-star affair, the sort of place that defines the upper class in Rwanda while others life in relative poverty. It’s important to note that Paul is a Hutu and his wife Tatiana (Sophie Okonedo) is a Tutsi. For those with racial purity narratives that are critically important to them, this probably makes their children Tutsi as well.

Why is this important? Because the Hutus have engaged their militia and are threatening to take over the entire country over the smaller Tutsi population. In true genocidal fashion, this happens specifically by various media outlets, military, and paramilitary personnel spreading rumors and racial hatred against the smaller Tutsi population. Change the word “Tutsi” to “Jew,” and we’re not very different from 1936 Berlin.

Fortunately, there’s not a great deal of the movie here that is focused specifically on the actual genocide. In that respect, Hotel Rwanda is an easier watch than a film like The Killing Fields or Salvador. Don’t kid yourself, though. There’s plenty of death here. However, the film focuses on the specific trials and actions of Paul Rusesabagina in attempting to keep his family and the hundreds of Hutu and Tutsi refugees who end up at his hotel. To keep them alive, he must deal with greedy, ravening Hutu warlords, some of whom are willing to accept bribes for temporary stays of execution for Tutsis in the hotel. He needs to deal with his own staff, who are both Hutu and Tutsi and have a variety of opinions. He also needs to deal with what can only be called the worldwide apathy of the Rwandan problem. Paul’s problem is summed up succinctly by UN peacekeeping force leader Colonel Oliver (Nick Nolte) that there will be no help coming because Paul and the people in his hotel aren’t even black; they are African, and no one cares.

I like Don Cheadle as an actor. Cheadle is one of those rare actors who has the ability to be almost instantly likable in any role he is in. We want to like Cheadle in general, and when he is put in the position of having the moral high ground and literally almost nothing else but his wits to keep himself and his loved ones alive, he is immediately compelling. The film is also smart enough not to focus all of its energies on the genocide. Make no mistake here—the genocide is clearly a major part of this film, but it’s not front and center in terms of what we actually see for most of the film. Instead, the focus is on Paul and the various machinations he needs to go through to keep his wife, children, and neighbors alive for another day or another hour.

Hotel Rwanda is well made and compelling. In truth, all it really needed to be was well made because it’s compelling almost by definition. Human atrocity is the train wreck of film—we don’t want to watch but we can’t look away. Hotel Rwanda doesn’t shy away from the horror of the situation, but also doesn’t revel in it. In one sense, that makes it easier to watch. It doesn’t rub our faces in the horror. But it also makes it much more likely that the story will get out to more people, since it won’t immediately turn off or scare away a large chunk of the audience.

Because of that, it’s a smart movie, and I appreciate that. This is not a film that anyone really enjoys. Instead, it is the sort of film that people need to watch to remind themselves that the minute we believe we have reached the bedrock of human stupidity, hatred, and depravity, there is someone who will show up to demonstrate that there is no bedrock and that that pit appears to be bottomless.

Why to watch Hotel Rwanda: It’s the sort of story that everyone needs to see.
Why not to watch: Humanity sucks and it sucks hard.