Wednesday Horror: Interview with the Vampire: The Vampire Chronicles 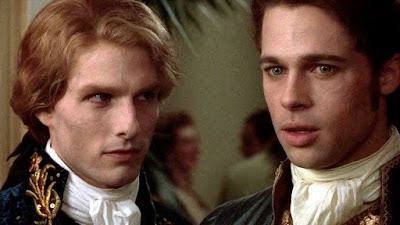 Years ago, I had a student write a paper on vampire movies. It was her contention that vampires switched from being monsters to being love interests for teenagers with the release of Interview with the Vampire. It’s probably been a good 20 years since I’d seen this, although I remembered it pretty well. Still, it’s worth a rewatch, and I figured I might as well revisit it. I remembered liking this the first time through and thinking that parts of it were pretty homoerotic. I forgot just how homoerotic it was, though, and I also forgot how much fire there is in this movie.

We start in the present as interviewer Daniel Molloy (Christian Slater) sits down to interview Louis de Pointe du Lac (Brad Pitt). Louis quickly and openly admits to being a vampire and demonstrates some of his abilities to Daniel before telling his story. We jump back to 1791 New Orleans, where Louis is dealing with the recent death of his wife and child. While Louis isn’t completely suicidal, he’s the next closest thing, actively looking for someone to help him shuffle off his mortal coil. It is in this frame of mind that he meets Lestat (Tom Cruise), a vampire who is only too happy to give Louis the gift of death and then undeath.

Louis’s transition to vampire isn’t the easiest because he has a moral qualm against killing, one that Lestat does not share. Louis survives on rats and chickens for a while, but when plague strikes New Orleans, he finally gives in and comes close to killing a young girl named Claudia (a very young Kirsten Dunst). Lestat turns her to be a companion for Louis, and as a trio, our vampires make a meal of New Orleans, feeding off the flood of immigrants and transients moving through the city.

Over time, Claudia realizes that her vampiric nature means that she cannot change; she’ll forever be a little girl, and even cutting her hair causes it to return to its former state a few moments later. Cursing Lestat for this, she plots to kill him, which proves to be more difficult than she would have initially thought—in this world, sunlight and fire seem to be the main causes of vampire death, and garlic and crucifixes have no real power against them. While Lestat tries to take revenge for his near second-death experience, Claudia and Louis flee to Paris, where they find another group of vampires led by Armand (Antonio Banderas). They also learn much to their peril that the only crime in this world is killing another vampire, and the two of them technically have Lestat’s blood on their hands.

Eventually we get back to the United States and the interview, and Daniel Molloy’s plea to become just like Louis, a gift Louis doesn’t want to give. We also find out just before the end that Lestat is still around, hiding out in New Orleans and feeding on animals the way Louis used to do. He’s a broken shell of his former self, timid and terrified despite his undead status.

So let’s talk elements of the film. First, there are a few wooden moments in the film that may have slipped past viewers. Brad Pitt has a couple of line readings that simply don’t work very well despite how much he really tries to sell them. It’s a little hard for me to believe that this was released literally the year before both 12 Monkeys and Se7en, which are the two films that I think show Pitt as someone who has really learned to act. He’s not bad here, but he got a lot better in short order in the years that followed. Tom Cruise has a massive presence over the film despite being in it really only for the first half or so. He’s gone for a long sequence, but he still casts a shadow over the entire thing. He gives the best performance here without question. Kirsten Dunst isn’t bad, but also has a couple of odd line reads during the course of the film. There are moments when she works perfectly and others where she just doesn’t work at all.

Now, onto the fire. There’s a lot of it. Louis burns down his plantation shortly after turning. He and Claudia set Lestat on fire at one point, and this goes on to burn down a substantial portion of New Orleans. Louis burns down the vampire theater in Paris as well. All of the big set piece moments end in fire. It’s a little repetitive.

There’s also the matter of bodies. During their heyday, Louis, Lestat, and Claudia are killing off entire families at times, and are certainly each going through an average of a couple of people per day. Even a couple of hundred years ago and even with an influx of immigrants, the idea that a few dozen corpses drained of blood could show up every week in a city for something like 30 years without anyone knowing is hard to believe. It’s a plot hole that didn’t work for me the first time I saw this and still bothers me.

This is also very homoerotic. That’s not a good thing or a bad thing; it’s just a true thing. There’s no getting around the idea that the relationship between Louis and Lestat and eventually between Louis and Armand has real, tangible sexual undertones…in that respect, it’s actually quite a bit like Top Gun.

Interview with the Vampire isn’t a bad film, but I’m hard-pressed to call it a great one. I’m also not entirely sure I want to call it a horror movie. Oh, there’s plenty of death and our main characters are vampires, but this is much more a tragic romance than anything else. Finally, shout out to the make-up crew. The vampires look unhuman but still human, and the effect of their veins being visible is actually really good.

Why to watch Interview with the Vampire: The Vampire Chronicles: It’s probably the start of the new version of the romantic vampire ideal.
Why not to watch: If homoeroticism bothers you, you’ll be bothered a lot.