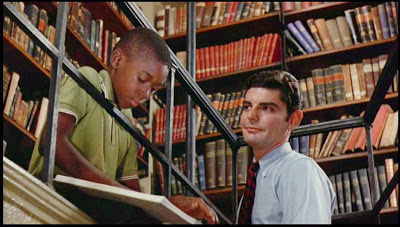 I did not go into Goodbye, Columbus with very high expectations. It’s a story that has been compared with The Graduate in a lot of ways and for obvious reasons. It’s also based on a novella by Philip Roth, an author I haven’t much enjoyed in the past despite giving him several chances. However, it was the last film left on the DVR before we swapped it out for a new one, and since I can’t locate the film any other way, there was nothing to do but watch.

This is where I’m happy to report that Goodbye, Columbus was a hell of a lot better than I was expecting. In fact, it’s a small wonder to me that this hasn’t eclipsed The Graduate for the genre of aimless post-college student looking for some sense of meaning (and a lot of sex) while he figures out what to do with his life. Since that is essentially the plot, the connection to The Graduate is pretty clear.

Neil Klugman (Richard Benjamin) is a graduate from Rutgers and an Army veteran living in New York and trying to figure out what to do with his life. He’s working at the public library for the time being, and living with his aunt and uncle while he decides what life has to offer him. His cousin Doris (Kay Cummings) invites him to her family’s club once per summer. This time at the club, Neil encounters Brenda Patimkin (Ali MacGraw) and is immediately smitten. He does a little digging, finds out her number, and calls her out of the blue.

What follows is a summer-long fling between Neil and Brenda. The two are clearly taken with each other, but the road to romance is not a smooth one. The biggest obstacle is the obvious class differences between them. Neil doesn’t come from money and neither does Brenda, but the Patimkins have hit it big on the back of Ben Patimkin’s (Jack Klugman) business. As nouveau riche, the Patimkins bear all the traditional faults and foibles of their station. The family is a bit crude and a lot pretentious, none more than Mrs. Patimkin (Nan Martin, and it’s worth noting that the character is unnamed).

This becomes one of the biggest problems in the relationship. The Patimkins, particularly Brenda’s mother, are convinced that Neil isn’t good enough for their daughter and certainly won’t be able to support her. While Ben is content to let the relationship run its course, his wife doesn’t really want her daughter having anything to do with Neil. Thus it becomes a potential issue when Neil essentially moves in with the family while Brenda’s brother Ron (Michael Meyers) prepares for his wedding.

Like a lot of Roth’s work, Goodbye, Columbus focuses a great deal on sex. In fact, most of Neil’s and Brenda’s relationship is predicated on sex. It becomes an issue when Neil discovers that Brenda isn’t on the pill and doesn’t believe that she will get pregnant. He forces her to get a diaphragm instead and she eventually agrees. This becomes a significant plot point at the end of the film, and I won’t reveal why this is the case.

Goodbye, Columbus trades on two performances, those of Richard Benjamin and Ali MacGraw. MacGraw’s Brenda is (and pardon me for saying this) a stereotype tuned perfectly. She is the quintessential Jewish-American princess, always given whatever she wanted by her parents and completely beholden to them. Brenda is perfectly willing to go against everything her parents want and believe as long as they don’t know and completely unwilling to defy them the minute they discover that she has. It’s a fine performance even if it is a stereotype of a spoiled rich girl in a lot of ways.

It’s Richard Benjamin who makes the film, though. Benjamin’s Neil is funny and clever, sarcastic and a little bit rude, even if he’s directionless. This is what makes him so appealing. He’s smart enough to know that he doesn’t know what he wants and just smart enough to care a little, but not too much. He’s not so much listless as he is knowingly uncaring. He’s not disaffected. He simply realizes that he hasn’t decided to care about anything yet, aside from Brenda. And that's the difference here. In The Graduate, Benjamin is indolent and lazy and uncaring, but there's a sense of entitlement to him. Neil has the same qualities, but he knows he's kind of a shit. He also knows he'll probably get over it at some point, so he's just allowing himself to have fun.

Surprise, surprise, I rather liked this. As much as I expected it to be a slog, and for as much as there isn’t a terrible amount of plot, I found this entertaining in a lot of ways. This should be the indolent post-graduate movie from the 1960s that people point to. If only it had come out before The Graduate.

Why to watch Goodbye, Columbus: It’s what The Graduate should be.
Why not to watch: Neil is really the only likable person here.