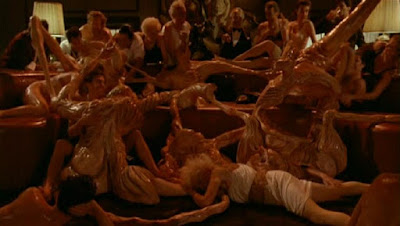 Jeez…where do I begin? I honestly don’t know if we’re going to get anywhere coherent with Society, but I think we’ve got to try. This is body horror on steroids, the kind of thing that David Cronenberg might think up but wouldn’t actual consider putting on the screen in a thousand years. There’s a kernel of a story here, a message that really wants to be understood. The problem is that there are massive gaps in the screenplay that make even the willing suspension of disbelief something that doesn’t cover everything that needs to be taken in by the audience. Society has real problems with the way it all fits together. It’s audacious and monumentally weird and worth seeing for how far it goes, but it’s worth noting at the outset here that coherence is not a strong suit.

The easiest way to explain Society is that it is a riff on They Live without the special glasses and with a lot more body horror. The other movie I’m reminded of here at least in part is Slither, although this clearly would be the influencer in that respect and Slither the one being influenced. If you’ve seen all of these movies, you know exactly what I’m talking about here. If you haven’t, I guess I still need to explain as best I can.

Bill Whitney (the improbably named Billy Warlock, and no, that’s not his birth name) lives a life of luxury in Beverly Hills. He’s got money, a girlfriend, and it looks like he might be elected class president. However, things don’t really seem right to Bill. He has a strained and strange relationship with his parents, Jim (Charles Luca) and Nan (Concetta D’Agnese) as well as his sister Jenny (Patrice Jennings).

A few times during the film, Bill sees things that don’t really seem to make sense. He walks in on his sister in the shower, but she seems to have half of her body facing the wrong way. Later, after being seduced by a girl from school named Clarissa (Devin DeVasquez), Bill sees her lying in bed and evidently performing some physical position that shouldn’t be possible. In both cases, Bill is quickly disabused of what he thinks he’s seen.

But, of course, he has seen what he thinks he’s seen. That’s the entire upshot (and the entire third act) of Society. These aren’t aliens, though, but another species that is very different in particular ways, especially when it comes to feeding and sexual behavior. This species, it is claimed, has always been a part of the planet, and is what makes up society. These are the wealthy, who quite literally feed on the poor and needy at these orgies. And, it turns out the Bill was adopted by his society parents, and thus isn’t really a part of the group. Since he isn’t and since he seems to be discovering all of the family (and society) secrets, there’s really only one thing that can happen to him. This, then, is the entire point of the third act.

The thing about Society is this: to really discuss what is wrong with this film (and there’s a whole lot that is wrong with it), I have to fully discuss the ending, because it’s here that the problem is most apparent. I’ll put this under a spoiler tag, but you may want to go ahead and read it anyway.

Bill has been raised by the Whitneys more or less as a lamb to the slaughter. Apparently, Bill will…taste better? Something? because he’s been raised in the home of society members. At the part that covers the end of the film, David Blanchard is dragged in and consumed first. It’s important to note that Blanchard was presumed dead in an accident and there was a funeral. It’s clear that the members of society have the ability to circumvent the law, aided clearly by the fact that the police are society members, too.

No, it’s in how everyone behaves around Bill at the end. He’s being held down by his high school rival (Ben Meyerson). Clarissa has decided she loves Bill despite being one of society, so she lets him up and tells him to run. So he does—right into the bulk of the party, and everyone just lets him run upstairs in the house where he encounters his shrink (who has been in on this) and his incestuous family. And eventually, Bill is dragged back downstairs and picks a fight with his rival. Everyone lets the fight happen, and when Bill is victorious (because of course he is), he, Clarissa, and his friend Milo (Evan Richards) just walk past everybody and leave. They walk past all of the body morphing, cannibalistic alien things and leave. And the aliens let them.

That’s really my problem here. Society has an ending it wants, and it can’t get there honestly. Because it can’t, it gets there by any means necessary, and in this case, that means absolutely shooting anything like realism within the movie world in the foot. If you can’t get there honestly, you don’t deserve to get there at all, and Society makes us jump through some very dumb hoops, some plot holes you could move a boat through, to get the ending it wants. It feels like a cheat.

The effects work is top notch and gross, but the story itself ends up being very stupid despite a really interesting premise.

Why to watch Society: Truly messed up body horror.
Why not to watch: It takes a lot of plot short cuts and demands a lot of filling in the gaps from the audience.