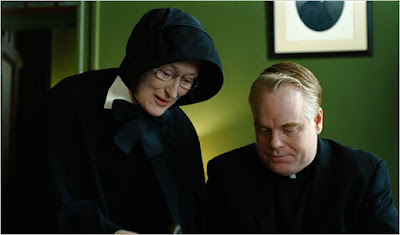 Doubt is one of those rare movies that netted four acting nominations at the Oscars. Meryl Streep nominated for Best Actress isn’t a huge surprise and neither is Phillip Seymour Hoffman for Supporting Actor. Amy Adams certainly earned her nomination in a supporting role. Viola Davis is honestly a bit of a shock, though. Now, I love Viola Davis as much or more than the next person, but she’s got only a single scene. Admittedly, she is amazing in that single scene, but still, it’s a very small role.

What I find most interesting about Doubt is not the premise but the time period in which it is set. The idea of a movie about the Catholic Church’s “problems” with pedophile/pederast priests is certainly well-known and scandalous and horrifying in so many ways. But having a film that touches on these issues set in the mid-1960s is particularly interesting. Obviously the problem was happening in those years, but it wasn’t known. It doesn’t feel off, but it does feel unusual.

What we have is a parochial school in the Bronx attached to a Catholic church. The priest at the church, Father Flynn (Philip Seymour Hoffman) naturally takes an interest in the students in his school. In particular, he seems concerned with a troublemaking student named William London (Mikr Roukis) and a troubled—and the only African-American—student, Donald Miller (Joseph Foster). This is noticed by both Sister James (Amy Adams), a young and naïve teacher at the school and by Sister Aloysius Beauvier (Meryl Streep), the school’s principal. Sister Aloysius is the opposite of naïve. She is cold, angry, viscous, and suspicious of everything that happens. The children at the school are uniformly fearful of her, and with reason. She warns Sister James and the other sisters to pay attention to anything they see regarding Father Flynn.

It doesn’t take long for things to change. Father Flynn calls Donald to the rectory one day, and when Donald returns, Sister James notices him acting strangely and believes that he might smell of alcohol. This sets the wheels in motion regarding Father Flynn. When confronted, he claims that Donald was caught drinking the communion wine, but that Father Flynn said he would keep the secret so the boy could continue being an altar boy. Sister Aloysius has her suspicions, though, and for her, those suspicions equate to fact.

Seeking to handle the problem as best she can, Sister Aloysius contacts Donald’s mother (Viola Davis) and tells her of her suspicions. For her part, Mrs. Miller is at the end of a particular rope of which Sister Aloysius knows nothing. She is aware that her son is gay and is regularly abused physically by his father because of it. She doesn’t seem particularly disturbed by the possibility that he might be being sexually abused by Father Flynn since he is at least getting attention in some respect.

It’s an ugly story made uglier by the unyielding nature of Sister Aloysius. She is the definition of someone who must be right at all costs and, as she says on more than one occasion, that taking steps to deal with wrongdoing means stepping away from God. In her world, seeking out and handling what she sees as corruption is worth even the risk of the eternal damnation she believes in.

The biggest problem with Doubt is also one of its greatest strengths. All of these characters are unpleasant at best. Sister Aloysius is completely heartless and terrible. Sister James is so trusting that she essentially believes anything that is said to her. Mrs. Miller is so buried by her problems that she can’t find a way out that isn’t terribly damaging to her child. And Father Flynn? Well, we need a spoiler for that.

Doubt is another of those movies that is excellently made with a story that truly resonates, but that is unpleasant and nasty in many ways. I don’t like the characters, but I’m not supposed to. Meryl Streep is supposed to be horrible and she is truly an awful person to spend time around. And yet there is real fascination here, and the closing moments are staggering. I won’t watch this again for a long time, but I’m happy I got a chance to watch it.

Why to watch Doubt: An acting class on all fronts.
Why not to watch: Man, are these characters unlikable.