Where You Goin' with that Gun in Your Hand? 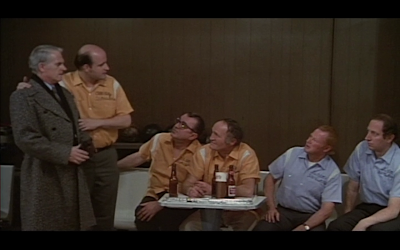 Sometimes with NetFlix, I play a game I call “What will I get roulette.” The idea is that I stack all of the movies with a wait time at the top of my queue, figuring that even though there’s a wait on them, I’ll get one of them. In this case, I got Joe from 1970, which was not the movie I thought it was going to be. Joe is an ugly movie in a lot of ways. It’s politically ugly, socially ugly, and brutal. It’s also a movie that helped shape the 1970s in a lot of ways.

We start with Melissa Compton (Susan Sarandon), who lives with her drug dealer boyfriend Frank (Patrick McDermott). One fine evening, Frank fixes Melissa up with an overdose that lands her in the hospital. Melissa comes from a wealthy family. Her father, Bill (Dennis Patrick) works in advertising and makes the equivalent of about $400,000/year. Upset at what has happened to his daughter, he tracks down her boyfriend, and during their argument, beats him to death. Bill runs away with Frank’s stash, and a few days later, Frank’s body is found. Since the drugs are gone, it’s assumed that this was a drug hit.

Meanwhile, after the murder, Bill goes to a bar, numb from what he’s done. It is here that he meets Joe Curran (Peter Boyle), a blue-collar worker. Joe is pretty much an everything-ist. He hates everyone and everything that isn’t him. Racist, sexist, etc. Joe is on a rant about how much he’d like to kill some hippies when Bill lets it slip that he just did. Impressed, Joe buys him a drink, but Bill scurries off into the night. When the news comes to light about Frank’s death, Joe puts two and two together and tracks down Bill, wanting to, more or less, team up with him and complain about everything in the world.

Because of this, Bill and his wife Joan (Audrey Caire) are forced to endure Joe’s company, since they realize that Joe could, if he felt betrayed, turn Bill in for the murder. However, Bill’s high status job, impressive salary, and the fact that he’s actually killed a hippie leaves Joe in awe of him. When Melissa escapes from the hospital and overhears her father admit to the murder, she disappears, and Bill spends his nights looking for her. Eventually, Joe finds out about this and decides to help, which leads to the third act.

I won’t go into detail here, but suffice to say that the third act involves Joe and Bill trying to find Melissa by contacting various hippies and sharing with them the vast stockpile of drugs that Bill stole from Frank’s apartment. This leads to a wild sex party (yes, that’s upsetting when it includes Peter Boyle), during which Bill’s and Joe’s wallets and drugs are stolen. Eventually, this leads to a final confrontation and something like the ultimate message of the movie.

I said at the top that Joe is an ugly movie, and it is. This doesn’t mean that it’s not well made or interesting in certain ways. It’s very much a cinematic train wreck in the sense that it’s horrible to look at but impossible to turn away from. It’s also a film that appeals to a particular base instinct in people. Joe is in many ways a glorification of violence and anger. It is a 107 minutes of hate-fueled rage against anything considered counter-culture, and because of this, it was a hit with certain audiences. In fact, it was such a hit that when Peter Boyle saw audiences cheering the slow-witted, racist, and violent Joe Curran, he refused to appear in any other films that glorified violence in this way.

And that’s really the legacy of Joe. It’s NRA wish fulfillment in a lot of ways. It’s entirely possible, even likely, that the intent of the film was the opposite of the actual result. If that’s the case, it had the opposite effect. What should have been seen as something entirely negative, brutal, and violent, was praised by audiences who felt similarly passed by, out of place, or were disgusted with the remnants of the 1960s culture around them.

It’s not a stretch to suggest that Joe served as at least a partial template for All in the Family and Archie Bunker. It’s also not a huge stretch to suggest that this was influential in shaping films like The French Connection and Dirty Harry. Joe Curran wasn’t meant to be a hero, I don’t think, but he became something like an anti-hero at the time.

This is a hard film to like. I didn’t enjoy watching it, but I think it’s a film worth seeing. We’re prone to giving in to our baser impulses, and movies are often wish fulfillment in one way or another. Movies often give us the chance to see our fantasies acted out on a screen, and for some of us…well, most of us at one time or another, those fantasies are violent ones. Joe gives in to that.