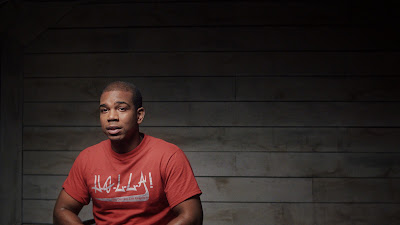 A few days ago, fellow 1001 List completer Adolytsi posted news that the next version of the book, while not available, is listed on Amazon and all of the new movies can be seen. The 2017 edition looks to add 12 movies; one is from 2015 and the other 11 are from 2016. As it happens, I’ve seen four of them and two others are on my Oscar list and planned for the next couple of months. That means I had to add six movies to my NetFlix queue. Of those, four are streaming and a fifth is available on disc, leaving only one that might be a problem in the months ahead. I’m always down for getting a jump on things, so today I decided to watch 13th.

I may be wrong, but I think this is the first NetFlix film to be included on the List, which makes it noteworthy, if that’s the case. The truth is that it’s noteworthy even if that isn’t the case. 13th is named after the 13th Amendment to the U.S. Constitution, which is the one that outlawed slavery. The gravamen of the film is that while slavery was outlawed, something very akin to a loophole was included in the amendment that allowed for a kind of slavery to still take place. That loophole is that slavery or involuntary servitude is illegal except in cases where someone has been convicted of a crime.

The argument that follows is one that is certainly familiar to me. Following the ratification of the 13th Amendment, mass arrests of former slaves were conducted, essentially putting those people immediately back into a slave situation. Further, the film argues that this is something still happening; the incarceration rate in the United States is the highest in the world. The film opens with the rather shocking statistic that while the U.S. has a mere 5% of the world’s population, our borders contain 25% of the world’s prisoners. Of those millions of prisoners, African-Americans are overwhelmingly overrepresented.

As befits such a serious subject, DuVernay takes multiple paths to prove her case. The most obvious tactic is to simply look at the number of African-Americans killed by the police and others who are then, more or less, allowed to walk free. The “stand your ground” law in Florida gets a long look, and the film makes the case that the jurors of the George Zimmerman trial were specifically instructed to keep that law in mind while deliberating, but were clearly not told that, legally, Trayvon Martin would have the exact same rights.

The drug war gets a long look as well, since the drug war is one of the major factors in the ballooning of the American prison population. The film is also remarkably even-handed in where criticism is doled out. It would be easy, for instance, to hold up certain law and order elements of the American political right as being complicit in what has happened, but Bill Clinton’s endorsement of the three-strikes laws is roundly criticized as well. Commentary from both sides of the political aisle is included, and both sides are frank about mistakes that have been made in the past and that are continuing to be made.

Perhaps the most troubling aspect of 13th is the revelation of ALEC, the American Legislative Exchange Council. While the film goes into great depth on this organization, the short version is to say that this is a coalition of mainly conservative politicians and business leaders who draft boilerplate legislation that can be then introduced in the national and state legislatures. The point of this aspect of the film is to draw a line between many of the laws that have been clearly detrimental to the general black community and the profit margins of various companies that are members of ALEC. While several pieces of legislation go under the microscope here, none is so fully and roundly attacked as the for-profit prison lobby and corporations.

The truth is that I’m not well-enough informed to say how accurate the film is. It makes a compelling case. It’s also a film that walks pretty closely to the way that I think already, which means that in many ways I’m the prime audience for it. Because of that, I’m a little wary of accepting it as it lays. It’s research I need to do. What it’s done, at least in my case, is make me realize that this really is research I need to do.

The truth is that I’m not going to understand the African-American experience in the United States completely. I am, after all, so white that I’m almost clear. What I can do is realize that I don’t have the understanding I need and do what I can to gain that understanding. 13th is a good place to start.

Beyond that, I think this is a film that needs to be seen. There clearly is a problem. Are the reasons what the film and Ava DuVernay claim? I think that’s very likely, at least in part. Certainly DuVernay brings her own biases to the filmmaking no matter how even-handed her treatment seems to be. At the very least, it's a large part of the puzzle, even if there are a couple of pieces that we don't know about fully. What it does, though, is start the conversation, and it’s a conversation we need to start having.

Oh, and for the record, these are the films in the next Book update:
Victoria (2015)
La La Land
Hell or High Water
The Jungle Book
Jackie
Toni Erdmann
Under the Shadow
Manchester by the Sea
I, Daniel Blake
13th
Arrival
Moonlight

I realized as I looked back through this that I might not have fully explained what I meant in a couple of these paragraphs. When I say that I'm willing to accept Ava DuVernay's claims but feel like I should do more research on my own, I don't want to come of sounding like I am somehow doubting her experience or the experiences of the people in the documentary. I'm referring here specifically to the idea of cause for the problem, not the question of whether or not the problem actually exists. It clearly does. Serious problems, social or otherwise, tend to have multiple causal factors, though, and and with a problem this serious and significant, rooting out as many of those causal factors is critical in solving the issue.

Why to watch 13th: One of the most vital issues in modern American society.
Why not to watch: It makes the situation feel insurmountable.

Posted by SJHoneywell at 5:44 PM