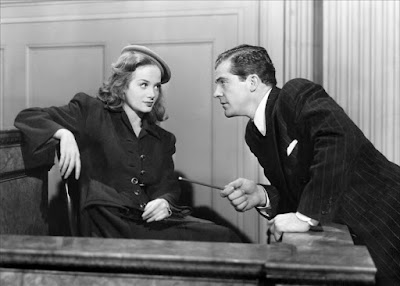 Every now and then, you get a movie that you almost can’t explain. We tend to expect certain things from movies and from certain genres, but there are a few out there that are just out there in terms of genre expectations. Boomerang! is that sort of a movie. This is clearly film noir at least in tone, but it’s so strange and so off from the typical. It feels like a documentary in parts, especially with the voiceover, and while it is noir-ish, it ends with a long courtroom scene that is just a revealing of evidence.

We start with a murder, which is really how a good film noir ought to start. In this case, the victim is Father Lambert, a kind, mild-mannered man of the cloth in Bridgeport, CT. The killing happens at night, but on an occupied street directly under a streetlight. Despite this, the witnesses see only a man in a dark coat and a light-colored fedora fleeing the scene. Father Lambert is dead on the scene with a bullet in his head. We get a little bit of flashback, showing us the kind of man that Father Lambert was. This includes a confrontation with a local man (Philip Coolidge) who he thinks should have himself committed for some reason. Yes, this is going to be relevant, because we as the audience are going to be led to believe that this man is the killer.

However, back on the case, the local police are stumped. Local police chief Harold “Robbie” Robinson (Lee J. Cobb) is under great pressure from the local political leaders, who were swept into office on a wave of reform. When no leads turn up, the opposing political faction uses this (and an influential local paper) to start to push the political tides more to their side. Caught in the middle of this is Henry Harvey (Dana Andrews), the local state’s attorney.

It takes a few weeks, but eventually a drifter is picked up in Ohio who answers the description of the killer. Better for the case, this drifter, John Waldron (Arthur Kennedy) was in Bridgeport at the time of the murder and left town soon after. A quick extradition and a two-day grilling session forces a confession from him out of pure desperation even though he’s adamant that he didn’t commit the crime. Regardless, with a confession, and a gun that looks like it may have been the murder weapon, it looks like an open and shut case.

But, and this is important, Henry Harvey is an honest man. He’s expected to prosecute the case put before him as it stands, but there are things about the case that he doesn’t like. He investigates on his own, and when the case begins, despite being the prosecutor, he lays out the reasons why the case should be dismissed. After, he is threatened by a local businessman (Ed Begley), who is involved in a corrupt land deal that, without her knowledge, involves Harvey’s wife Madge (Jane Wyatt). Undaunted, Harvey returns to court and begins questioning various witnesses, leading to the film’s conclusion.

Boomerang! includes a voiceover narration that gives us insight into the various characters and their motivations. It comes across as the sort of thing that was eventually copied by television shows like Dragnet. Although it feels artificial, it works in the context of the film and really does serve to help keep the strange plot coherent over the film’s short running time.

It is the strangest film noir I’ve seen in a long time, though. When I think of film noir, I think of devious, twisted crimes that involve double crosses and desperate people. I think of dangerous women out for blood, money, or both. I think of shoot outs and action, and guys getting roughed up in alleys by thugs. The closest we get to a femme fatale here is Cara Williams, who plays a local waitress who points the finger at Waldron for personal reasons, not because he’s actually guilty. She’s only in the film for a couple of scenes, and while she fits the femme fatale profile, she’s not in the film enough to really qualify. The only shootings happen at the very start (the murder) and in the courtroom (once as a test, once as a shock moment I won’t spoil). There’s no real action here. Instead, there’s some intrigue and a lot of time spent expounding on theories and revealing evidence.

Dana Andrews is the star of Boomerang! and he’s serviceable in the role. Arthur Kennedy, who gets to chew a little scenery in his interrogation scene and again when he’s interviewed in his cell, is better, and is the most compelling character in the film. Lee J. Cobb is, well, Lee J. Cobb. Despite being a cop and not specifically a racist with problems with his child, he’s kind of indistinguishable from the character he’d eventually play in 12 Angry Men, at least in tone. Jane Wyatt is so much an afterthought in this that she may as well have been played by a mannequin.

Despite how odd it is, I enjoyed watching this. Courtroom dramas are compelling by their very nature, and this is a good one in large part because it is so strange and so different from the norm. This is suddenly a difficult film to find since NetFlix no longer offers it. I tracked it down online, and it’s a good transfer, but this really should be a film in better circulation because it does avoid so many of the standard genre conventions while still firmly being a part of that genre.

Why to watch Boomerang!: As good a story as you’ll find in film noir.
Why not to watch: It ends with a long scene in a courtroom discussing evidence.