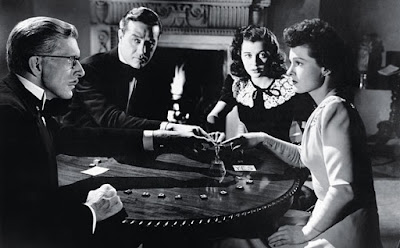 There’s something about classic horror movies that I love. There’s no need for the people involved to feel like they need to up the ante on the gore or the shock moments, so they instead concentrated on the story in plenty of cases. The Uninvited is exactly that sort of movie. It would be wrong to suggest that this is really scary, because it’s not. This is not the sort of film that is going to give anyone nightmares unless they are very young or very naïve. However, it would be similarly wrong to write this off as a trifle or a silly little spook show. There are some great moments here, and an engaging story that almost dips as much into film noir as it does into the supernatural.

Set the Way-Back Machine to 1937 in those years before World War II when the rumors of war were still swirling but the fighting hadn’t yet begun and people could think about things other than bombs. On the coast of England brother and sister pair Roderick “Rick” Fitzgerald (Ray Milland) and Pamela Fitzgerald (the underrated Ruth Hussey) are ending their vacation before heading back to London. They encounter an old abandoned mansion on the beach when their dog chases a squirrel inside. Pamela falls in love with the place despite a studio on the top floor being oddly cold and forbidding. She convinces Roderick that if the two of them pool their money, they can buy the place and live there, with him returning to composing music as a source of income. He confesses that the newspaper he works for would like him to do a series on great musicians, and that that will give them enough to live on.

Taken with this wild idea, Rick and Pamela meet with the house’s owner, Commander Beech (Donald Crisp), who is willing to sell them the house for a greatly reduced price. He cites wanting a nest egg for his granddaughter Stella Meredith (Gail Russell) as the reason, but Stella is against the sale since that was the house her mother lived and died in. There are hints around the town that the place is haunted; in fact, the previous tenants left without fulfilling their lease. Rick, wanting to improve local relations, spends a day with Stella out on the ocean before he returns to London to make arrangements while Pamela stays in town to get the house ready.

Three weeks later, Rick returns with housekeeper Lizzie Flynn (Barbara Everest) only to discover that Stella has gone cold socially and hasn’t been to the house. Rick’s first night in the house, he is awakened by the sound of a sobbing woman and goes to investigate, finding Pamela out on the landing as well. Evidently, this is a sound she’s heard before in the house, and it always seems to vanish at sunrise…and so it does.

This leads Pamela and Rick on an investigation that takes a number of twists and turns. Stella has been forbidden from coming to the house by her grandfather, but she comes anyway, and finds herself captivated by a warm and welcoming spirit that she attributes to her mother, Mary Meredith. Then the whole story comes out. Her father was a painter who had an affair with his model, a Spanish gypsy named Carmel. According to the legend, Stella’s parents took Carmel to Paris. They returned with the infant Stella, but Carmel followed and pushed Mary over the cliff, then died a few days later of pneumonia. So what we have is not one haunting, but two—one that seems beneficent and one that is malignant.

We get a séance or two, a runaway dog, and Stella’s near-death at the same cliff a couple of times along the way. We also learn about Carmel’s death and the possible implications against a woman named Miss Holloway (Cornelia Otis Skinner), who runs a nearby asylum. Also joining the party is Dr. Scott (Alan Napier—friggin’ Alfred to Adam West’s Batman!) who is concerned for the Fitzgeralds and what appears to be the rapidly disintegrating psyche of poor Stella.

There’s a lot of fun stuff going on here. Having Ray Milland and Ruth Hussey in was is in a lot of ways a little potboiler film is a great coup for starters. I like both of them as actors and really wish both of them were better known. What’s better here is that this is a really engaging story that contains a lot of ideas and makes pretty much all of them work all the way through. There are some excellent twists in the plot, and The Uninvited manages to stay fresh and engaging all the way through to the end, quite a feat for a film of this vintage.

Truthfully, a lot of modern horror fans will find The Uninvited dull and not really dipping into the horror elements nearly enough. I can see that even if I disagree. This is, after all, from 1944, and so while we do get a couple of ghostly manifestations, there’s not going to be any real blood or grue here. This is a film that tries to work on a deeper level, to create a sense of danger and of a real touch of the supernatural, and for the most part, it works pretty well. It’s beautifully filmed, too, and while it can’t go for the bloody, it does manage to touch on some cool ideas of insanity that work well with the overall narrative.

I’m really pleased that I got a chance to watch this. It’s highly entertaining and while it may have worked a little better without the ghostly manifestations, leaving those in the minds of the viewers, it works well enough that I recommend it to anyone who likes a good spook story and is willing to watch one without any of what is considered the modern trappings of the genre.

Why to watch The Uninvited (1944): A better-than-average spook story with a great cast.
Why not to watch: If your horror tastes are modern, it will come across as tame.

Posted by SJHoneywell at 8:59 PM