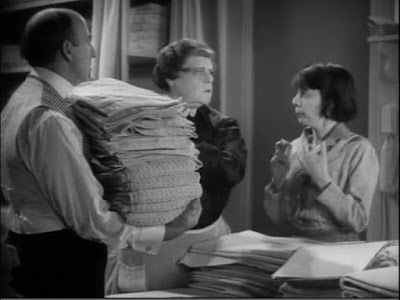 When you’re dealing with the early era of the talkies, it’s a good bet that you’re going to be dealing with melodrama in a big way. That’s certainly the case with Emma. This is almost the definition of a melodrama, truth be told. We’re going to get a plot and characters here that couldn’t be more melodramatic if you paid them to be. It’s going to go right for the emotional jugular and it’s going to hurt a bit.

Emma Thatcher (Marie Dressler) is the housekeeper for the Smith family. As the film begins, three events happen simultaneously. First, Mr. Smith (Jean Hersholt) receives a check for $5,000 for an invention. This is the equivalent of just north of $80,000 today, so the Smiths are suddenly flush with cash. Second, Mrs. Smith gives birth to the couple’s fourth child, Ronnie. Third, Mrs. Smith dies from childbirth. Flash forward 20 years, and we’re at the main part of the film.

As we’ve jumped ahead, we discover that three of the four Smith children have become spoiled by their father’s success. Son Bill (George Meeker), and daughters Isabelle (Myrna Loy!) and Gypsy (Barbara Kent) have lived in luxury for years now, and their attitudes reflect this. In fact, Isabelle has married European royalty. All three demand that Emma solve their problems for them and tend to be less than thankful for any help. The only exception to the Smith children’s bad behavior is young Ronnie (Richard Cromwell), who is Emma’s favorite. Ronnie also depends on Emma, but he’s much nicer and less demanding about it. His new passion is flying, and he wants to drop out of college to become a flyer.

Emma has finally decided to take a vacation after more than three decades of service with the Smiths. However, when she realizes what a shambles the family will become without her, she decides she doesn’t want to go. Mr. Smith takes her to her train, and when she starts to panic about leaving the family for a month, he decides to go with her, and proposes to her on the spot. After a little struggle, she accepts, and the two whisk off to Niagara Falls, much to the consternation of three of his children and to the equal delight of Ronnie.

And here’s where the melodrama happens. On the honeymoon, looking to impress a group of kids, Smith has a heart attack and eventually dies from it. Upon his death, it is revealed that he has changed his will, leaving everything to Emma. It was his plan to have Emma continue to look after the family, and by putting her in charge of the money, he could ensure that they would be taken care of. The three older children react badly, of course, and attempt to contest the will. When they can’t break it, they accuse Emma of having killed their father. All of this happens while Ronnie is away, and when he hears of the trial, he rushes home in his biplane without a care about the terrible weather. Yes, that’s a hint about what’s going to happen. I won’t reveal the actual ending.

So, this is melodrama writ on the family stage. We’re clearly intended to sympathize with poor Emma, who really has been devoted to her employer’s children. She even offers to give them back all of the money, but they are insistent on the court battle and the murder trial. Of cours the kids are ingrates—this is a melodrama, after all, and melodrama is no good without some people we know are real villains. It’s for the same reason that Emma, Mr. Smith, and Ronnie are all set up as being as perfect as they can be. Again, we’re supposed to sympathize with them and since they are all pretty much perfect, we do.

Here’s the thing: despite all of this, and despite the massive amount of melodrama, Emma is actually pretty good. Well, sort of. Emma is fair to middling, but Marie Dressler is fantastic all the way through. She gets to show some comedy chops in a few places and she als gets the big, dramatic, tear-jerking scenes, and she plays them all perfectly. Dressler was an extremely talented screen actress, and for all the melodrama and the just-out-of-silents era that we’re talking about, she could be incredibly nuanced in her performances.

What this means is that, ultimately, I don’t think a huge amount of Emma as a film but it’s another reassurance that Marie Dressler was the goods when it came to these early talkies. She is what is worth seeing here and the film only works at all because she was so good.

Why to watch Emma: Marie Dressler at the top of her game.
Why not to watch: It’s the most melodramatic film you’ll see for a long time.