Film: Another Year
Format: DVD from Rockford Public Library on The New Portable. 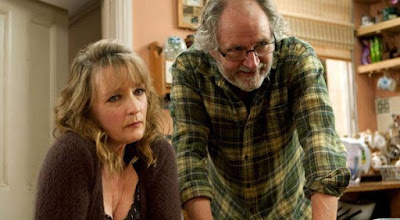 Sometimes, what makes a movie interesting isn’t so much the story as it is the perspective from which the story is told. That’s absolutely the case with Another Year, a film that is, on its surface, a pretty standard slice of life drama that takes place over the course of roughly a calendar year. What makes this film interesting isn’t the stories it tells, since these stories are pedestrian and normal. It isn’t the people the stories are about, since they are not particularly unique or special in anyway. It’s that the stories are more or less told from the perspective of two people who are essentially tangential to everything that happens.

Tom (Jim Broadbent) and Gerri (Ruth Sheen) are a happily married couple who have a comfortable and happy life together. Yes, their names are Tom and Gerri, and yes, this comes up in conversation at least once. Tom works as a geologist and Gerri works as a counsellor. The two of them are the more or less stable center of a world of people experiencing a variety of problems and pains. Where Tom and Gerri are happy, pleasant, and caring, their friends are lonely, despairing, and emotionally torn apart.

Another Year starts in the spring and essentially introduces us to some of the players. The most important of these are Mary (Lesley Manville) and Joe (Oliver Maltman). Mary is a middle-aged divorcee, desperate in her loneliness and what feels like privation. Joe is Tom and Gerri’s unmarried son, roughly 30, still unmarried, and working as a lawyer advising people in real estate and housing cases. Mary has known Joe since he was little and Joe sees her as something like an aunt. Mary, though, feeling her own loneliness, has started to consider the possibility of seeing Joe as something more.

In truth, while Tom and Gerri are perhaps the central characters in that everything happens around them or in their house, it is Mary who is the most prominent in the story. As the season shifts from spring to summer, we are introduced to Ken (Peter Wight), a friend of Tom’s from college. It’s soon apparent that most of the people in the life of Tom and Gerri have serious issues. Ken drinks too much and eats too much and seems miserable with everything going on in his life. Later, at a barbecue, we get a very uncomfortable triangle. Mary flirts with Joe, who has the good graces to more or less ignore her advances. Later, Ken tries to move in romantically on Mary, who pushes him away.

In the fall, things come to a head. Joe arrives at his parents’ house with Katie (Karina Fernandez), his new girlfriend. Mary arrives later and finds the presence of Katie brings out the worst in her, something clearly noticed by everyone else. In winter, things resolve in part propelled forward by the death of Tom’s sister-in-law and the temporary arrival of Ronnie (David Bradley) at Tom and Gerri’s house.

After blogging movies for this long (roughly 8 ½ years at this point), it’s not often that I find myself with nothing to say about the movie that I just watched, but that is exactly where I am with Another Year. There is nothing in this movie that is world shaking or life changing. It’s just life, and there’s nothing about it that is particularly noteworthy. It just is, and because of this, it feels like real people dealing with the disappointments of their lives. Gerri and Tom, are the warm emotional center of all of this, the sort of couple who exist perfectly in each other’s orbits, and who will die within a week of each other. There’s something particularly beautiful about that almost painful normality. They have found a way to exist happily, not because they have everything they want, but because they don’t want anything they don’t have.

The strength of Another Year is twofold. The script is very smart in that it doesn’t attempt to do anything other than just present these people as clearly and as realistically as possible. No one is changing the world or making millions or affecting the world beyond their immediate surroundings. They talk about what is going on in their world. Their conversations are real.

The second prong of this is the performances, all of which are natural. Another Year is smart enough to give us actors who aren’t beauty queens. Ruth Sheen, for instance, is slightly odd looking, which works perfectly for the film. She doesn’t look like a former beauty queen, but like a real woman with a real life. Lesley Manville isn’t prettied up for this, either. She looks like a woman with her youth just behind her who is desperately trying to cling to what youth she has remaining. It’s a wonderful performance, because everything she does in the role only reinforces exactly how she looks.

Another Year is surprisingly beautiful and unexpected. It’s contemplative in the best way. Nothing happens really, and while there aren’t any massive fights or moments of high spectacle, the whole thing plays out as a real slice of believable drama. It isn’t the sort of film that demands to be seen on a massive multiplex screen, but it is one that seems worthy of a quiet evening at home.

Why to watch Another Year: It genuinely feels like real life.
Why not to watch: Like real life, there’s not necessarily resolution. There’s just a stopping point.