Fly Away (from) Home 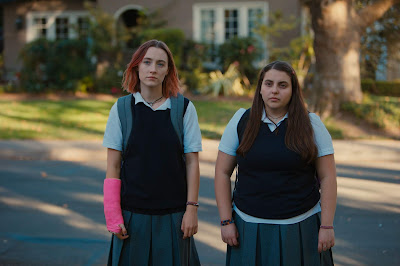 One of this blog’s pet peeves along with romances between men and women half their age is coming-of-age movies. My contention has long been that when the main character is a boy, the story will be about coming to terms with death. Coming-of-age from the male perspective (at least in Hollywood) means coming to terms with mortality. For girls, coming-of-age films tend to be about sex, and in many cases, about sex with someone completely inappropriate (and often twice the girl’s age). So, while girls aren’t forced to deal with their impending deaths, they are forced to deal with their ability to create life. So how would Lady Bird fit into this? I was keen to find out.

Make no mistake; Lady Bird is a coming-of-age story. Christine “Lady Bird” McPherson (Saoirse Ronan) is a senior at a Catholic high school. It’s the early 2000s and the McPherson family lives in Sacramento, a place Lady Bird (she gave herself the nickname) is desperate to leave. She’d like to go to college somewhere on the East Coast where she believes culture exists, but the family is struggling financially and her mother Marion (Laurie Metcalf) tells her that the family can’t afford it and that she doesn’t really warrant it.

The film tells the story of Lady Bird’s final year in high school and her struggles to cope with family drama, school drama, and relationship drama. Sex will come up here—it almost has to at one point, but, and this is critically important, this is not even close to being the focus of the film. It’s not even really the focus of its own scene. Lady Bird has sex for the first time with Kyle Timothee Chalamet), and the takeaway from the scene isn’t that she is no longer a virgin, but that Kyle lied to her about his own virgin status. In fact, it’s a much bigger and more important plot point that her first boyfriend Danny (Lucas Hedges) turns out to be gay.

This is going to sound strange unless you are familiar with both this movie and the Bradbury book, but Lady Bird reminds me tremendously of Ray Bradbury’s “Dandelion Wine.” Both are coming-of-age stories that deal with growing up on multiple fronts. Lady Bird includes sex, but the film isn’t about sex or a sexual awakening, or even Lady Bird coming to grips with her power to create life. Bradbury’s book, taking place almost a century earlier, half a continent away, and about a boy 7 or 8 years younger than Lady Bird McPherson deals with the traditional male coming-of-age stories of death, but also with other forms of loss and love and growth. Both stories are not about one thing, unless that one thing is simply becoming something else in the space of a year (in Lady Bird) or a summer (in “Dandelion Wine”).

In truth, the biggest story inside of Lady Bird is her connection to her parents. She has a good, if somewhat distant relationship with her father (Tracy Letts), who loses his job at one point in the film and reveals that he struggles with depression. It is her mother with whom she clashes constantly. The two are always bickering except in moments when they suddenly aren’t and for just a few seconds are mentally and emotionally on the same page.

There are a lot of things I can say about Lady Bird beyond the performances, all of which are heartfelt and worth seeing. Saoirse Ronan will one day have a shelf in her palatial mansion dedicated to her Oscar collection and Laurie Metcalf earned every bit of her Supporting Actress nomination. But there are performances all the way down here, particularly Beanie Feldstein as Julie, Lady Bird’s best friend who is temporarily ditched for a cooler crowd but then reclaimed as a friend by the end. Smaller roles for Lois Smith and Stephen Henderson don’t hurt, either.

I can also say that I like Greta Gerwig on screen well enough and have in the past. As a director, Lady Bird shows a lot of promise and a lot of restraint. Gerwig is clearly smart enough to know when she doesn’t need to overdirect a scene and can allow her actors to tell the story without any wizardry on her part. No, the real revelation here is that while Gerwig can act and shows promise as a director, she needs to be sitting down at her computer a lot more. Lady Bird is brilliantly written, the sort of film that could (and should) win an Oscar in a lot of years for its screenplay.

What I think is that Lady Bird is going to be a movie that will stay with me for a long time. Its power is in its reality. There are moments for so many of the characters that feel so pure and real and pulled from real life. Small touches that show a brilliance of story. While Lady Bird is on camera for most of the film, there is a sequence near the end where the focus is entirely on her mother. It’s almost shocking to not have our main character in front of us, and yet that is precisely where we need to be focused. Even the ending, which could easily feel like an unnecessary coda, ultimately has a function here and is the right choice.

I’m happy to have seen this.

Why to watch Lady Bird: Saoirse Ronan is her generation’s Meryl Streep.
Why not to watch: Honestly, I’m still working on this.