Film: Before Night Falls
Format: DVD from NetFlix on The New Portable. 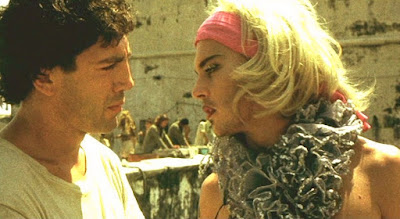 Because my job involves a great deal of reading, I don’t read for pleasure a lot. It’s one of the reasons I watch movies. Movies are a break from reading for me, and these days (and for the last decade or more, really), reading has been associated with work. Because of this, a lot of my “reading” comes in the form of audio books. The problem is that my local library’s collection is packed to the rafters with biography and autobiography, and I find that those genres leave me pretty cold. The same is kind of true with movies, which made Before Night Falls a hard sell for me. But hey, I’m getting to the point where I can’t keep putting off movies that I’m not particularly interested in watching. And this one at least stars Javier Bardem, and actor I really like.

Before Night Falls is the story of Reinaldo Arenas (Javier Bardem), a Cuban author who was writing during the Cuban revolution. Arenas, in addition to being something of a counterrevolutionary and of a talent that made him dangers to Castro and his minions, he was also homosexual, which made him a threat in very different way. Eventually, Arenas managed to get out of Cuba and wound up in the United States, essentially living in exile until he died of AIDS. What this means is that despite being based on a true story and likely following the story as cleanly and accurately as possible is going to be very paint by numbers in a lot of respects.

And in terms of how I tend to do things here, that’s going to present a problem because Before Night Falls is less a movie with a plot than it is a biography of Reinaldo Arenas. Arenas was a perfectly interesting guy and I don’t object to the idea that a picture could be made about his life. It’s not this movie in particular, though, despite the strength of the performances.

The plot summary mentioned above really is it. We see Arenas (Bardem) approach a variety of men and proposition them. We see him get as a young man want to join the rebels and help turn the country around. We see his early success as a writer, and even the early success of the Cuban revolution, which pulls Arenas out of studying accountancy and puts him in a job at the National Library.

But the positives will not last. One of the realities of a massive political revolution is that the revolution needs to continue. The best, perhaps the only way, for that revolution to maintain its edge is to find new people or ideas to be against. What is also true is that governments that lean more and more into the tyrannical and dictatorial are extremely rough on artists. When you are someone who thrives on free expression, being in a society that tends to react to that sort of free expression with oppression and violence is terrible. Since the Cuban revolution eventually came down on homosexuality and was already down on artists, Arenas was more or less doomed to the multiple years he spent in prison.

Before Night Falls tells a compelling story; I’m not going to disagree with that for a moment. It’s also not the fault of Reinaldo Arenas that the story that he experienced is exactly, or mostly, the story that we expect. While the details are going to be specific to Arenas, the broad strokes are exactly the things you expect. There’s going to be a period of a sort of sexual liberation followed by a longer period of sexual and artistic repression. Things are going to be really terrible for Arenas until he’s going to find a way out of the repressive system, and because of the time, we’re going to end up dealing with AIDS. In fact, the only surprising thing about this is that the section on AIDS at the end is surprisingly truncated.

The most surprising thing about Before Night Falls, aside from this being Javier Bardem’s first English-speaking role, is the presence of Johnny Depp in a pair of roles. He appears initially as a transvestite named Bon Bon who helps smuggle out Arenas’s work from prison. He also appears as an official of the government seeking a full confession from Arenas.

Before Night Falls is one of those movies that more or less requires the audience to like it. Because of the subject matter—artistic and sexual freedom, repression from the government—if you claim to dislike the film, you’re setting yourself up as being homophobic or in favor of tyrannical government. A more nuanced truth is that Before Night Falls is a fine movie, but one that doesn’t really demand to be watched and that certainly doesn’t need to be watched more than once. You’ve seen this story before, and you’ve seen it done better.

Why to watch Before Night Falls: Javier Bardem’s first role in English.
Why not to watch: Sure, it’s based on a true story, but it follows a very predictable path.

Posted by SJHoneywell at 9:07 AM