Film: The Affairs of Cellini
Format: Internet video on the latest internet machine. 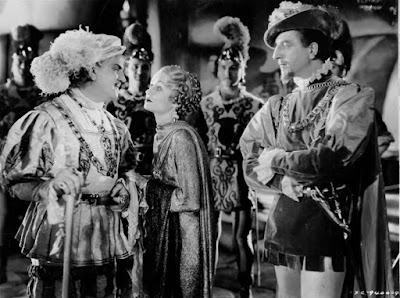 There are plenty of actors in the world who seem to do little more than simply play themselves. That could come from several different factors. It might be that the person in question is being typecast and is just getting more or less the same role over and over. In some cases, though, it seems like the actor just doesn’t have much in the way of actual range. I think, for instance, of someone like Edward Everett Horton—an actor I enjoy quite a bit—but someone who more or less played the same guy over and over in the same sort of movie over and over. Based on his Oscar-nominated performance in The Affairs of Cellini, I can say the same thing about Frank Morgan.

Again, I want to go on the record as saying that I like Frank Morgan. The moment he walks on screen in The Affairs of Cellini, though, you know immediately who he is even if you don’t know who he is. In this film, he’s playing Alessandro, the Duke of Florence, but if you saw him, heard him speak, and immediately thought that Oz the Great and Powerful somehow ended up in Renaissance Florence, I would forgive you. Aside from the costuming and the facial hair, there’s not a molecule of difference between Oz and Alessandro. What this also means is that while there are moments of drama in this film, we’re not going to get a great deal in the way of seriousness.

Our title character is Benvenuto Cellini (Fredric March), who appears to be the greatest scoundrel in Florence. There are multiple complaints against the man ranging from hoping a garden fence and romancing a young woman to murder. We learn that this is not the first time that Cellini has been in this sort of trouble, and the Duke is now being pressured to do something about it. However, his wife the Duchess (Constance Bennett) stays his hand. The reason is that they will soon be entertaining royalty from elsewhere in Italy and Cellini has been commissioned to craft golden plates for them to use. To not have the plates would be a huge loss of status. So, it is declared that Cellini will live until the plates are done.

It’s also worth noting that the Duchess has trouble seeing Cellini has being this great lothario, but it turns out that she has only dealt with his assistant (Vince Barnett). We then find out that, not content to have rested on the laurels of chaos he has already sown, Cellini has attacked a member of the de’Medici family, a relative of the Duke. We jump then to Cellini’s quarters where we encounter him attempting to woo Angela (Fay Wray), his model. When the Duke gets a look at her, he decides he wants Angela for himself. Shortly after this, the Duchess shows up and gets a look at Cellini and decides she wants him for herself.

Complications arrive when Cellini arrives secretly at the palace for his tryst with the Duchess. What he finds is that the Duke is still in town rather than having headed off to a different palace. Why? Because he’s got Angela and is attempting to woo her. Mix ups continue and eventually, Cellini absconds Angela and takes her away, which enrages everyone—the Duke because Angela is gone and the Duchess because Cellini is gone, and now everyone wants his head. And worse for him, Angela wants to go back to the palace.

What I find interesting about The Affairs of Cellini is how everything resolves. This is a film from 1934, and our ending appears to be a tacit approval not merely of adultery directly under the nose of one’s spouse, but flat-out murder to get that. It does all resolve as well as it can for everyone except for the people who get in the way of the Duchess’s libido.

Truthfully, The Affairs of Cellini is pretty harmless, but because of that, it’s also not very memorable. Fredric March does as much as he can with a role that is pretty florid and ridiculous, but most of the roles here are ridiculous. The best moments in the film belong not to March or Morgan but Fay Wray, who plays a character who is far more beautiful than she is bright. When she arrives at Cellini’s mountain hideout, she complains about the smell of the sheep, the holes in the ceiling, and the lack of cushions. She’s a delight here, even if the rest is pretty standard stuff.

So, if you want a movie where you more or less need to consider the Wizard of Oz getting his freak on with King Kong’s object of desire, The Affairs of Cellini exists for you. But really, you don’t need to see this.

Why to watch The Affairs of Cellini: It’s sort of Ernst Lubitsch lite.
Why not to watch: It’s straight up fluff.

Posted by SJHoneywell at 5:41 PM