Off Script: Scream and Scream Again 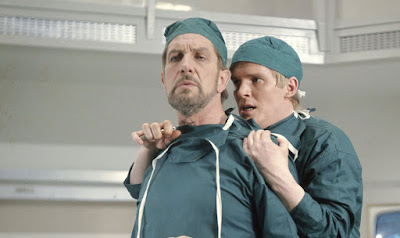 I’d love to tell you that Scream and Scream Again was a ton of fun for me to watch, but that would be a lie. It’s not, despite featuring a cast that includes Vincent Price, Christopher Lee, and Peter Cushing. In fact, it’s an incomprehensible mess. While this was based on a novel and apparently sticks pretty close to the source material, it also seems like virtually every horror and science fiction trope from vampirism and golem creation to random vats of acid lying around have been cobbled together with something akin to a narrative to hang all the scenes together. It feels like a film that wants to hit every touchstone of the genre in the hopes that there will be something there to please any fan. And, as normally happens when someone tries to tick off all the boxes, it ends up a poorly-conceived mess.

And that’s kind of the problem for me. This is a film that is almost impossible to summarize in any way that is remotely coherent. There are murders that involve people being drained of their blood and people having limbs amputated, and there’s a whole weird subplot that happens in something like a communist country with a strange symbol. There’s also Vincent Price as an eccentric doctor who literally has a vat of acid on his property. Our evil killer jumps into it at one point, after escaping from the police by more or less snapping his hand off to escape his handcuffs.

I’m going to end up spoiling this movie, and I’m going to do it right now. The most upsetting thing about Scream and Scream Again is that it has Christopher Lee, Vincent Price, and a cameo from Peter Cushing and it is ultimately a remake of the Richard Kiel “classic” sci-fi screamer The Human Duplicators. Seriously, this is a retread of a movie that starred Richard Kiel and was featured on Mystery Science Theater 3000.

Apparently, the book that Scream and Scream Again is based on gives us an alien invasion that involves people being murdered, pieced up, and turned into “composites,” which is essentially this film’s term for a Frankenstein monster. Some of our composites are more or less robots who do what they are told. It’s also evidently possible for the more advanced composites to get a little wiggy, since the blood draining killer turns out to be a composite. Actually, lots of people turn out to be composites, with their brains transplanted into human-like bodies made up of pieces of dead people.

That’s something that’s always bothered me a little bit about the Frankenstein story. Why exactly do we need to have parts from different people? I get it in the original story; Mary Shelley didn’t have a lot of medical knowledge and the idea of organ (or other) transplants was beyond the knowledge of everyone on the planet and beyond the imagination of most. But by the time this was made, we knew a thing or two about this procedure. Even something as simple as contrasting blood types would be potentially fatal to the composite creature.

It’s also worth noting that this is at least the second movie (House on Haunted Hill is the first) in which Vincent Price owns a pool of acid. And you know that someone is going to end up in it. It’s sort of like the acid pool version of Chekov’s gun. If you’re going to tease us with a massive acid pool in one of the first two acts, you’d better make sure that someone’s going to take a dip in it one way or another. I’ll say this, though—the acid pool actually gets quite a workout before the final frame.

There’s a lot here that just doesn’t make sense. There are multiple plots that we jump to over and over throughout the running time and in the last 15 minutes or so, everything comes flying together all at once so that everything kind of gets wrapped up in a bow, and even then it doesn’t really happen. Getting rid of the alien connection is a problem here, because all of that would have made all of this make sense. It’s implied, kind of, but not really ever gone to explicitly, and that really needs to be explicit to make this even remotely work.

I wanted to be entertained by this, but I simply couldn’t be. This was a train wreck with a classic, underused cast. Kind of a shame, really.

Why to watch Scream and Scream Again: Great cast.
Why not to watch: Stupendously dumb.