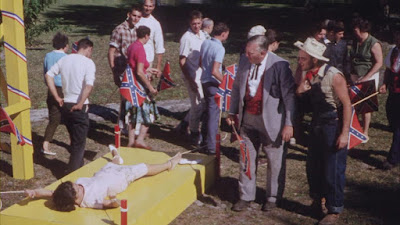 What can be said about Herschell Gordon Lewis that hasn’t already been said? Probably nothing. I mean, I can give you my opinion of Lewis and what I’ve seen of his work, but there’s almost certainly someone who has said virtually the same thing. Lewis’s work is, of course, sleaze cinema with very little in the way of redeeming qualities. However, it’s also true that without Lewis, a great deal of the modern horror might not exist, or at least wouldn’t exist in the same way. Lewis was a gorehound and so much of his oeuvre was really just an excuse for as much blood and viscera as he could get on the screen. And with that, we’ve got the blood-soaked Two Thousand Maniacs!, complete with axe-wielding, dismemberments, and death by giant rock.

Before we get too far into discussing this movie (and believe me, there’s not a great deal to discuss here), it’s worth taking a moment to look at Herschell Gordon Lewis’s career. He’s remembered as the guy or one of the guys who introduced real gore into American films. This started with Blood Feast, and Two Thousand Maniacs! came the following year. Lewis got his start in nudie cuties, though, films that depicted naked buxom women in a variety of situations. These are the sensibilities that we’re going to be dealing with here.

The elevator pitch version of Two Thousand Maniacs! is that a sextet of Northerners travelling through an unnamed part of the South—Alabama or South Carolina seems likely—are purposefully misrouted into a little Podunk town called Pleasant Valley. They are told that it is time for the town’s centennial celebration, commemorating an event that took place 100 years previous. Since the film more or less takes place in the film’s present, this means that the event from 100 years previous happened at the end of the American Civil War. That’s not going to bode well.

And, of course, it isn’t. We find out eventually the event in question was the wholesale slaughter of the town’s inhabitants, which certainly indicates that the centennial celebration might well be the blood sacrifice of these six hapless Yankees. Just to keep things fair, the six are essentially three couples, although the third pairing isn’t really a pair. The townspeople will then use every possible means to separate these people off from each other so that then can be brutally murdered. These deaths will include an axe, a barrel filled with nails, a giant rock, and four horses running in opposite directions.

These deaths are what people want to see in a Lewis movie. It’s all about the blood, the color and consistency of house paint. Lewis was never what anyone would call subtle, and Two Thousand Maniacs! exists specifically so that he can but half a dozen people in danger from an entire town of crazy people and, better for his audience, kill them off in ways that will involve a lot of fake blood and even more fake body parts.

That’s pretty much literally the entire film. Lewis evidently had no real eye for anything but the most prurient image he could think of for the scene, be it nudity or violence. In the case of Two Thousand Maniacs!, it’s going to be violence. In a surprising change from Blood Feast, Two Thousand Maniacs will feature both male and female victims, a moment of egalitarianism that seems out of character for Herschell Gordon Lewis. The deaths are creative, at least in moments (the barrel with the nails is interesting) but also surprisingly crude (a dunk tank-like device that drops a boulder on someone). It’s as if Lewis hadn’t quite found his muse yet, or was still looking for doing something similar to, but unrelated to Blood Feast.

I find it difficult to say that I liked Two Thousand Maniacs! I didn’t hate it, but it’s also not a film that I think I’d like to watch again. It’s almost interesting in spite of itself, and might be Lewis’s most coherent movie. That this is the case—it has an actual plot that makes sense and a real resolution—is a little depressing, but it does make this worth seeing.