Shut Up and Deal 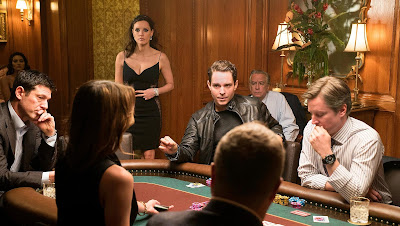 If you look back at all of the reviews I’ve put on this site, there are plenty where I got the movie from one library or another. Tons of those have come through interlibrary loan, but there are four libraries I use personally. My hometown library, DeKalb Public Library, doesn’t have a great movie collection, although it is slowly improving. Suddenly, out of nowhere, they have tons of current movies. I’m always a little surprised when something like Molly’s Game, a movie that almost no one has heard of, shows up. Okay, I realize that a lot of you reading this have heard of Molly’s Game, but we’re a self-selected audience of movie nerds. Mention this movie the next time you’re at work and almost everyone will look at you like your dog does when it hears a noise it can’t comprehend.

Molly’s Game is the story of Molly Bloom, a former world-class mogul skier who, thanks to a freak accident, was unable to fulfill her Olympic aspirations. Left with the sudden loss of a career that had taken up virtually her entire life, Bloom (Jessica Chastain) decides to put off law school for a year and instead head to L.A. and live on the couch of a friend from the U.S. Ski Team for a year. While here, she gets a job as a hostess at a high-priced club, and from here gets a second day job as more or less an office manager of a real estate developer (Jeremy Strong) who talks a good game but is actually hemorrhaging money. One way that he attempts to deal with that is with high-stakes poker games. As his essentially abused office manager, Molly is suddenly in charge of his poker game.

This is going to be important, since these poker games are more or less what the movie is named after. Her boss’s game featured athletes, directors, film producers, and actors including one that she refers to as Player X (Michael Cera), who is alleged to be modelled mostly on Tobey Maguire. Molly acquaints herself not only with the players but with the world of high-stakes poker. Even better for her, players only get invited back each week if they tip Molly.

Player X becomes more or less Molly’s target in the sense that she hitches her wagon to his star. When her boss’s business tanks and his luck at the poker table runs cold, he more or less tells her that he’s going to stop paying her. She’ll have to keep working for him and run his poker game, but her tips from the game will be the entirety of her salary. Molly balks at this and creates her own game since she has all of the contacts of the players in her boss’s game. Suddenly her ex-boss is excluded and the game is now hers…and Player X’s. All is fine until she has a falling out with Player X, who takes the game away from her. And so Molly moves the game to New York and runs a new game there.

What’s important here is that none of this is illegal. The game is just the game, and while Molly runs it, she’s merely taking tips. What she is not doing is taking money out of the pot, called a “rake,” which turns her into an illegal casino. It’s in New York, when she is made to realize that she is in the position of needing to cover the bets of people should they not pay up and at the same time is making none of the actual money from the game that she begins to take a rake from larger pots. What she didn’t realize at this point was that in New York, a number of her players turned out to be connected to the Russian mob.

Most of Molly’s Game is told in flashback as Molly Bloom is dealing with a pending criminal case regarding her poker games (on the surface) and the Russian mob in truth. It’s her contention, though, that she ran the games but knew none of the identities of the real players. It takes her some work to convince her lawyer, Charlie Jaffey (Idris Elba) that her only crime was the game itself, and while she wrote a book on the game, she’s only named people who were named in previous indictments.

The last bit of the film deals with the resolution of the criminal case (and it was nice to see Graham Greene as the federal judge) as well as Molly’s reconnection with her father (played by Kevin Costner). While there isn’t anything that we might call a happy ending here, there is a resolution, and that’s going to have to be enough.

Molly’s Game Is Aaron Sorkin’s directorial debut, and it’s an interesting one. The film runs 141 minutes, and it’s a bit too long for the story that is being told. This is especially the case when we are more or less told that this is going to be the story of high stakes poker being played in many cases by people we’ve heard of and know something about. A great deal of this comes down to the fact that Molly has kept all of her old hard drives with all of her old texts and emails. She apparently has dirt on dozens and dozens of people…but that won’t come out in the film. The promise of these details simply don’t come through.

If we’re not going to get that, we should certainly get a good deal of poker, right? We get a little, but if you’re a fan of the World Series of Poker, you’re not going to get a great deal of that here. You’ll get a couple of hands interestingly displayed, but that’s about it.

So, while the story is compelling, it feels like a letdown. The cast is good—Jessica Chastain is very good in this, and Idris Elba is always fun to watch. It’s also a nice role for Kevin Costner, who is strangely compelling when he’s not trying to be the center of attention these days.

So, this is a fine movie, but it’s clear to my why it was nominated for what it was and why in many cases it wasn’t nominated. It’s worth a watch, but I can’t imagine not being a little disappointed by what isn’t here and feels like it should be.

Why to watch Molly’s Game: Crime is always attractive in film.
Why not to watch: It doesn’t live up to the tabloid promise.