Off Script: The Tingler 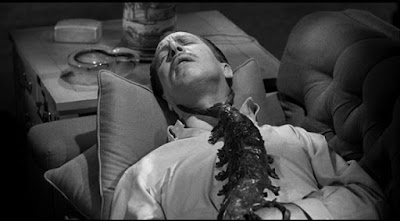 I love William Castle. I truly do. I’d be hard-pressed to call any of his movies great, but I also find them all completely appealing. There’s such a strange earnestness that comes in the work of Castle. No matter how strange and silly the premise, Castle really wants to have fun with the movies he’s making. He was also the absolute king of goofy promotions. With Macabre, he arranged for theater-goers to each have a $1,000 life insurance policy in case they died of fright and staged nurses in the theater with a hearse waiting outside. That’s genius. For The Tingler, he had seats in theaters running the film hooked up with vibrating devices that, at certain points in the film, would jiggle the person sitting in the chair. Castle dubbed this technology “Percepto!” and once again used this goofy idea of giving people something new in the cinema. He also allegedly planted people in the audience to faint at certain times in the movie.

For a movie with an 82-minute running time, The Tinger has far too much going on for any of its various plots to really reach fruition. Pathologist Warren Chapin (Vincent Price) is performing an autopsy on a man just executed by electric chair. Oddly, the autopsy is being observed by Ollie Higgins (Philip Coolidge), the dead man’s brother-in-law. Warren discovers that the man’s spine is broken, almost as if it was crushed in some way. This is something he’s seen before, but not specifically in someone executed. According to Warren, the man was scared before he died; this is a condition he only sees in someone who has died while terrified.

Warren gives Ollie a ride home, where he learns a great deal about Ollie’s wife Martha (Judith Evelyn). The couple run an old-time movie theater that shows only silent films. As it happens, Martha is completely deaf and was born without vocal chords. She also faints immediately at the sight of blood, something that we discover when Warren cuts himself on a broken saucer. Yes, all of this will eventually be relevant.

Back home, we get a taste of Warren’s home life. His wife Isabel (Patricia Cutts) is deeply dissatisfied with their marriage and spends most of her time running around with other men, leaving her husband free to carry on his research. Her sister Lucy (Pamela Lincoln) has a very good relationship with Warren, probably because she is dating Warren’s assistant David (Darryl Hickman). Isabel, who is independently wealthy, disapproves of this relationship and refuses to give her sister any of the inherited money if she should marry David.

Much of Warren’s research is in the nature of fear. Needing a good test subject, he threatens his wife with a pistol, and even shoots a blank at her to get her to faint. Then, while she’s out, he x-rays her back and discovers a multi-legged creature attached to her spine. Yeah, I know. It’s silly. This is the Tingler of the title. It’s Warren’s belief that every person has one as a parasitic attachment. When we experience fear, it curls around the base of our spine and squeezes, and only releases itself when we scream. Therefore, someone unable to scream (like Martha Higgins) could literally be scared to the point of having the Tingler crush his or her spine.

There are a couple of notable sequences that follow. The first of these is that Warren decides he needs to experience a real fear moment himself. He does this by injecting himself with LSD(!) and then trips out on camera. It’s pretty damn great to see Vincent Price absolutely tripping balls (or pretending to, kind of), screaming about how the walls are closing in on him. Second, and you knew this was coming, is the death of Martha Higgins, who is “attacked” in her apartment by a variety of ghouls and spirits. In a truly William Castle moment, she enters the bathroom to discover both the sink and tub faucets pouring out thick, red blood. It’s a shock moment that works, since the rest of the film is in black and white, and only the blood is red in these scenes. (Evidently it was done by painting the set black, white, and gray and doing Judith Evelyn’s make up in the same tones, then shooting on color stock.)

The problem with The Tingler is that it ultimately doesn’t make a lot of sense. We do get a good look at the critter itself when Warren removes it from the late Mrs. Higgins’s body, and one wonder how come no one in the history of pathology or medicine had ever discovered a two-foot-long parasite attached to people’s spines ever in the past. There’s also a great deal of plot here that needs to get crammed into such a small movie. The marital strife between Warren and Isabel seems to not really have much of a point and goes nowhere, although Isabel does attempt to kill Warren with the captive Tingler. The relationship between Lucy and David doesn’t seem to have much of a point, either.

It’s hard not to like this a little bit, though. Castle’s work is just so out there and crazy that it’s hard not to respect it. It’s so silly but it’s done so much in earnest. Castle certainly wanted to make a buck, but he also seemed to really want everyone to have a good time. And most people in the audience will, even if they end up not liking the movie that much.

Why to watch The Tingler: William Castle makes Vincent Price pretend to trip on acid.
Why not to watch: Ultimately, it’s pretty dumb.