Film: Return of the Living Dead
Format: On Demand on big ol’ television. 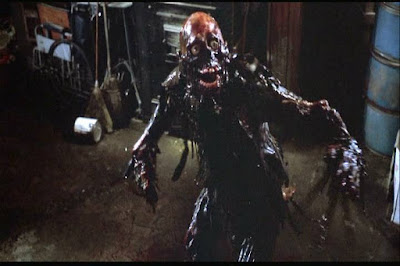 One of the most enduring ideas concerning movie zombies is that they love to eat brains. That trope didn’t come from Romero’s films, where the dead started mindless and eventually started to evolve and ate anything they could from their victims. No, the common idea that zombies love brains comes from 1985’s Return of the Living Dead, a movie where the zombies talk, can use tools and think, and eat brains because, as we’re told by one highly decayed corpse, they are the only thing that deal with the pain of being dead and feeling one’s body rot.

We start in a medical supply warehouse where Freddy (Thom Mathews) is being shown the ropes by Frank (James Karen). After a quick tour of the warehouse and a look at the variety of skeletons, dogs divided in half for anatomy study, and other things, Frank decides to impress his new coworker by bringing up Night of the Living Dead. According to Frank, it was based on a real outbreak, and the zombies (and yes, he actually says the word) were accidentally shipped to this Louisville warehouse by the army and are in the basement.

Turns out Frank isn’t lying. There are some canisters in the basement that contain bodies. Again trying to impress Freddy, Frank raps on one of the containers, which causes it to spring a leak, releasing a gas that knocks them both out for a time. When they wake up, the container is broken open and the body inside is gone. Worse, the gas seems to have caused a cadaver elsewhere in the warehouse to come to life. Not knowing what to do, they call in their boss Burt (Clu Gulager) and deal with the body that, unlike the documentary Frank claims Night of the Living Dead was, doesn’t die when its brain is damaged. Even removed body parts maintain their ability to move.

To deal with the problem, they take the dismembered corpse to the nearby graveyard in the hopes that mortician Ernie (Don Calfa) will cremate the still-moving parts. He does, and because of a sudden rainstorm, the chemical in the body parts rains back down, seeps into the ground, and brings all of the dead in the graveyard to the surface, looking for brains. This would be enough, but to get more cannon fodder into the mix, we’ve got Freddy’s group of punk rock friends in the area waiting for him to get off work. And we’ve still got the original zombie from the canister lurking somewhere in the warehouse.

Really, aside from the brain eating, there’s not a lot here that’s new. In fact, Return of the Living Dead does its level best to attack every possible trope it can. Anything that you expect to happen here is going to happen. Is there going to be nudity? Of course there is. One of the punks is played by Linnea Quigley, who does a full-on strip tease in the graveyard and spends the rest of the movie nude. Will the punks be slowly picked off and have their brains eaten? Of course they will. Will the plague start to spread? Yep, and it’s one of the better jokes that the zombies, once they have access to police and paramedic radios, start calling in more people so there are more brains for them to eat.

One of the better lines from the movie This Is Spinal Tap is that there is such a thin line between stupid and clever. The genius of Return of the Living Dead is that it jumps on that line and rides it all the way to the finish. It loves its tropes and adds in some new material so seamlessly that the new ideas, like brain-eating, become tropes themselves. The characters are sometimes dumb but generally pretty clever. Ernie, in fact, seems to be surprisingly smart in a lot of cases.

There are also some great characterizations. James Karen’s Frank spends a great deal of the movie having completely believable panic attacks. The movie is smart enough that it doesn’t specifically play the characters for comedy, putting them in mortal danger and having them react accordingly. The humor is definitely here, but it doesn’t appear to overshadow the horror or the gore. It’s tuned surprisingly well for what is essentially a cheap horror movie.

Why to watch Return of the Living Dead: This movie is responsible for zombies loving brains.
Why not to watch: You’re not a fan of brains.