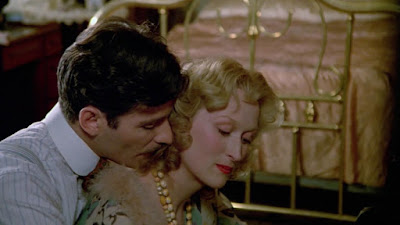 For the last several years, I’d seen 99 of the AFI Top-100 movies. I avoided and avoided that final movie (film #91 on the list, if you’re curious) for no reason other than the fact that I knew what the story was and didn’t want to subject myself to it. In truth, I never really set out to watch the AFI Top-100; I’d seen the 99 that I had by watching the 1001 Movies list and then seeing virtually every Best Picture nominee as well. The one that seemed to sneak past and that wasn’t on either of those two massive lists is Sophie’s Choice. So it’s yet another Meryl Streep nomination (and win) and yet another Holocaust story.

Sophie’s Choice takes place a couple of years after World War II. A young Southern man with the unusual moniker of Stingo (Peter MacNicol) arrives in New York with the goal of penning his first novel. He moves into a gigantic pink house, painted that color because the late husband of owner Yetta (Rita Karin) got a deal on the paint in question. Stingo takes the room and is soon introduced to Zofia Zawistowski (Streep) and her live-in paramour Nathan Landau (Kevin Kline). As good new neighbors, Zofia (who goes by Sophie) and Nathan invite their new neighbor to dinner, an invite that gets spoiled when Nathan has a manic episode of jealousy and storms out of the house. This is going to be something of a theme.

The entire point of the two-and-a-half hour ride of Sophie’s Choice is that we’re going to be riding on an emotional rollercoaster that reveals vital information bit by bit. We learn that Sophie was in a concentration camp despite being Catholic and not Jewish. She tells Stingo that her father was a professor at a Polish university and we eventually learn that she was married and her husband vanished at the same time her father did.

When we’re not learning about Sophie’s past, we’re learning about her present. Her relationship with Nathan is volatile mostly because Nathan himself is volatile. He appears to be something akin to bipolar. He spends a good deal of his time happy, fun, content, and wildly in love with Sophie. When his mood swings violently, he becomes paranoid and suspicious that Sophie is cheating on him. It’s not too long before he’s decided that Stingo is her paramour of choice despite there being nothing romantic between the two of them.

Eventually, we learn more and more of the painful and terrible truth of Sophie’s past. Her father, while a professor and an intellectual, was a Nazi sympathizer, believing that the extermination of the Jews was the only way to cleanse the nation. Despite these sympathies, he was taken away by virtue of being both an intellectual and a Pole. We also learn that Sophie had a lover during the war who was killed, and that she was sent to Auschwitz along with her children, probably because of her connections to her lover, who worked with the resistance.

There are, of course, more revelations, because they happen like clockwork. Some will be about Sophie (the titular choice comes at the end), but some will be about Nathan as well. Nathan claims to be a biologist working for a pharmaceutical company. Eventually, his brother contacts Stingo and tells him that Nathan actually works in the library at the company and isn’t really a part of research. All of the “schools” he claims to have gone to were actually sanitariums to treat his paranoia and schizophrenia. If you figure this isn’t going to end well…good on ya.

So let’s talk about the Oscars that are relevant to this blog. This was Streep’s fourth Oscar nomination and her second win. It’s hard to say that it was unwarranted. Streep has made a name for herself at being completely malleable in front of the camera, particularly in her ability to pick up accents and mannerisms. The word is that she picked up some Polish and German in her desire to get the accent as correct as she could. But it’s also worth noting that the role of Sophie is the sort of role that is genetically designed to be nominated for and win awards. Not voting for her would feel almost criminal not because of Streep’s performance (as good as it is) but because of the tragedy of Sophie’s life. As for the screenplay…it’s fine. I’m not convinced that it’s exceptional one way or another.

The other two performances of note here are those of Kevin Kline and Peter MacNicol. Kline, at this point in his career, did manic really well. According to IMDb, he got the role in A Fish Called Wanda specifically based on the strength of his performance here. I can see it—the two are very similar in many ways. Peter MacNicol, on the other hand, feels out of his depth. I don’t dislike MacNicol, but the psychological weight of this drama seems more than his slender shoulders were built to handle.

The problem with Sophie’s Choice is that it’s the sort of movie you’re not allowed to say you don’t like. You have to be impressed by it or people will think you have Nazi sympathies. It is a good movie, well made and acted overall. But it’s heavy, and not a film to be watched lightly. I’m more glad to have seen it than I was watching it, even if so much of the film is a build up to a final, terrible 15-20 minutes.

Why to watch Sophie’s Choice: It’s hard to say it’s not well made.
Why not to watch: You’ll want to kill yourself, and that’s not hyperbole.

Posted by SJHoneywell at 9:46 PM