Wednesday Horror: Children of the Corn

Films: Children of the Corn
Format: Streaming video from NetFlix on the latest internet machine. 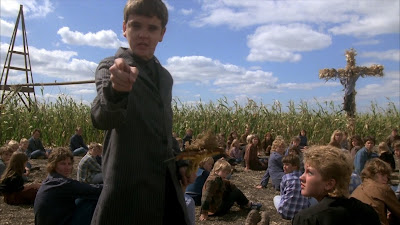 It’s not a surprise that stories written by Stephen King would be frequently adapted into films. Certainly it’s something that King himself appreciates. In fact, he offers a bunch of his stories as something he calls “Dollar Babies.” Film students and new filmmakers have the right to adapt these stories into films, provided they aren’t commercially released and that King gets a copy, for the princely sum of one dollar. And, of course, there are dozens of commercial films based on King’s work. Sometimes you get classics like Stand by Me or The Shawshank Redemption. Sometimes you get complete turkeys like The Mangler. Sometimes you get films that have literally nothing in common with the original story beyond the name, like The Lawnmower Man. And sometimes you get Children of the Corn.

Children of the Corn, sometimes known as Stephen King’s Children of the Corn, is a not so terribly accurate or faithful adaptation of the original story by King. Oh, it gets the broad strokes of the story, but it avoids the completely downbeat ending and the incredibly disturbing coda, opting instead for something that is, I have to admit, a lot more cinematic. What’s odd here is that the vast majority of the killing in Children of the Corn happens in the opening few minutes. There are a couple of deaths further in, but this is much more about the atmosphere than it is about the gore or the deaths.

The story takes place in the mythical town of Gatlin, Nebraska. While the town suffers a drought, the children stage a sort of youthful, religion-fueled rebellion. Led by Mennonite hat-wearing Isaac (John Franklin, sort of almost playing 13 or so despite being 25) and assisted by Malachi (Courtney Gains), the kids kill all of the adults in town, creating a new religious cult focused on a god called He Who Walks Behind the Rows. We learn this from Job (Robby Kiger), who narrates parts of the story. He and his sister Sarah (Anne Marie McEvoy) are the only two kids in town who seem to not be all that taken with the “kill all of the adults” plan. Sarah, it should be noted, has the gift of prophecy, which manifests through crayon drawings.

Into this creepy religious dystopia come Burt (Peter Horton) and Vicky (Linda Hamilton), who are on their way to Seattle where Burt will begin practice as a physician. Instead, a few miles outside of the now-cursed Gatlin, they strike a child. When they investigate, they discover that the hit from the car isn’t what killed him; his throat had been cut. Looking for help, they encounter an old man (R.G. Armstrong) who tries to send them on to a different town. But all roads seem to lead to Gatlin. From here, it’s going to be Vicky and Burt attempting to figure out what is going on, perhaps with help from Sarah and Job. And we’re going to have a power struggle between Malachi and Isaac.

I want to like Children of the Corn more than I do. The problem is pretty much entirely in the third act. To talk about the problems that exist here—and the problems are serious and a lot more than just the really bad special effects at one point—I need to dive into spoilers. I don’t enjoy spoiler tags in general, but in this case, there’s no way to get around it.

All of the problems with Children of the Corn come in the third act. There is a confrontation between Isaac, who is the leader of the weird cult and Malachi, who is his main enforcer. Malachi decides the time has come for a change of leadership, and he causes a mutiny, having Isaac tied to a cross out in the cornfield to be sacrificed. The next scene is perhaps the most famous from the film, where Malachi, dragging Vicky with him, demands that Burt give himself up.

Eventually, Burt and Malachi fight and the monster in the cornfield comes to claim his sacrifice using some really bad special effects. And shortly thereafter, Isaac comes back, and everything goes off the rails. How? Because the monster whips up a storm and starts to attack…and suddenly all of the kids in town are ready to follow Burt and Vicky to safety. And at the end, when the monster is fended off with even worse special effects, it’s only Burt, Vicky, Job, and Sarah who are leaving the town. There’s no suggestion for what might have happened to all of the other kids from Gatlin.

There are holes at the end that are just too big and aren’t explained. Even little attention to detail stuff glares at me. Job is called “Joby” early in the film, but only every calls himself Job around Burt and Vicky. Despite this, Burt knows to call him Joby at critical points. And it’s not really clear how Gatlin has managed to be undiscovered as a children-run cult in a town filled with murdered adults. Admittedly, this is before Google Maps and satellite photography, but still—the town is on a major highway route. We can laugh about Nebraska being flyover country, but we’re led to believe that the revolution happened years in the past.

I like Children of the Corn despite itself. I like it for how earnest it is. Malachi and Isaac are such weird characters that it’s impossible not to love the whole thing a little. And seriously, the damn thing spawned five sequels, so it must’ve done something right.

Why to watch Children of the Corn: It’s disturbing in ways that only horror movies that play hard with religion can be.
Why not to watch: The third act takes some serious liberties with the world the film creates in the first two acts.