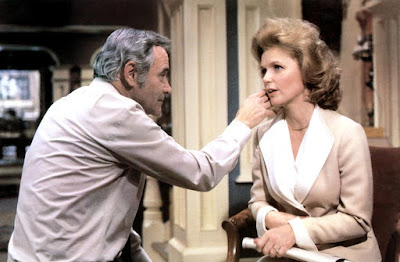 As this project winds to a close, there are now only a couple of years (not count 2017) where I have more than one movie still to watch. Since the goal is to not do a bunch of movies from the same year right in a row, there’s got to be an effort on my part to get through as many of those doubled-up years as possible. Thus I watched Tribute today, a film that has been sitting on a flashdrive, downloaded off YouTube for a couple of years. I can’t admit to a great deal of anticipation for this. I like Jack Lemmon, and his nomination is the reason I watched this. But it also stars Kim Cattrall and Robby Benson. The last time I saw a movie with Kim Cattrall and Robby Benson, it was an episode of Mystery Science Theater 3000 called City Limits, and it’s truly wretched.

Tribute is going to start by jumping up and down on one of my pet peeves. Scottie Templeton (Jack Lemmon) works in the theater community as a press agent. While he seems to have a lot of friends, he’s divorced and has almost no relationship with his son. Scottie is in the hospital for some tests, and before the tests can happen, he sneaks on a doctor’s surgical gown and more or less attempts to pick up a patient named Sally Haines (Kim Cattrall), who is about 30 years his junior. And, we’re going to find out that this works—she goes home with him because that’s the way Tribute is going to work.

It turns out that Scottie is seriously ill. While it’s never really stated, it’s likely that he’s been diagnosed with leukemia and doesn’t have long to live. At the same time, Scottie’s ex-wife Maggie (Lee Remick) arrives with their college-aged son Jud (Robby Benson) so that Jud can spend some time with his father. With his death now impending, Scottie decides that this is a perfect opportunity to show his son a good time. This is despite the fact that Jud is serious minded, plans on being a professor, and has a summer job lined up across the country.

To give an idea of exactly what sort of a person Scottie is, here are some things that we learn about Scottie and what he considers bonding with his son. First, he mentions a girl that he set up Jud with years before; Jud comments that she gave him a venereal disease. Second, Scottie decides that this would be a good opportunity to hold a retirement party for Hilary (Gale Garnett), his favorite prostitute—a retirement party that will include all of her frequent customers. Third, he decides that he’s more or less going to will Sally Haines to his son, so he arranges for the two to meet and has her allow herself to be picked up by Jud. This doesn’t go well because Jud essentially calls her a whore and she storms off. Don’t worry; she’ll be back.

But, I don’t know how much more I’m going to say about the plot of the film. Scottie Templeton is a man who is always out for a good time and doesn’t really know how to do anything else. He evidently had some talent as a writer (Jud mentions this at one point) but didn’t pursue it, possibly because it was too hard. While Scottie doesn’t really push other people away, he also doesn’t seem to take anything seriously enough to make any sort of meaningful connection with another person. And, since he’s dying, he’s decided that he needs to forget that sort of connection with his son, but doesn’t really know how to go about it, and Jud doesn’t really seem that interested.

Tribute has a nice cast. It’s interesting seeing Jack Lemmon reunited with his Days of Wine and Roses co-star Lee Remick. One can imagine that this could almost be the same couple 20 years or so later. Also here are John Marley as one of Scottie’s accomplices and Colleen Dewhurst as Scottie’s doctor. Kim Cattrall is, surprise surprise, not too bad. She’s not asked to do a great deal that wouldn’t be amiss on stage, but her performance is fine. Robby Benson is the problem here. He’s a drag on every scene he’s in, and can’t approach the level of anyone else on the screen. He’s wooden and close to embarrassing.

Tribute is Jack Lemmon’s film, and a good reminder that Lemmon was pretty much capable of any role he was offered. It’s a good, possibly great performance of a manic, rather awful character who ends up being the sort of person I want to get away from. Scottie Templeton needs to be the center of attention and needs to be the guy who has all the jokes. He tries way too damn hard. And so, Lemmon offers a solid performance of a man with these character traits.

I didn’t like Tribute in large part because the best part of it is in service of a terrible character. Scottie is selfish and kind of a jackass, and the idea that he can more or less will his son into a relationship with multiple women over they years—women who he has already had a relationship with—is downright creepy. Scottie is more or less willing the sexual rights of women to his son. Just…no.

Why to watch Tribute: It’s a good reminder that Jack Lemmon could do pretty much anything.
Why not to watch: Outside of Jack Lemmon, there’s nothing here.