Wednesday Horror: I am the Pretty Thing that Lives in the House

Film: I am the Pretty Thing that Lives in the House
Format: Streaming video from NetFlix on laptop. 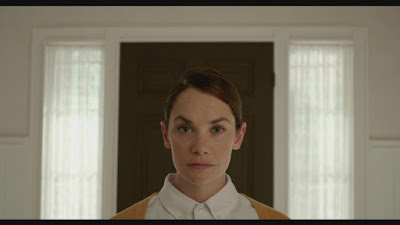 A great deal of modern horror is about putting as much blood on the screen as it will take. I’m not generally a fan of gore for its own sake. When it is used well as a legitimate part of the story, it can be extremely effective. When it shows up just for shock value or as fan service, I think that it generally fails. Because of this, I find it really interesting when a film takes the opposite path. The epically-named I am the Pretty Thing that Lives in the House is a movie of the second stripe. The goal here is to produce an atmosphere of dread without covering the screen in blood.

We are presented with hospice nurse Lily Saylor (Ruth Wilson), who has just been hired on as the live-in help of horror author Iris Blum (Paula Prentiss), who is slowly descending into dementia. The house in which the two live is old and, as befits the genre, both creepy and gifted with a strange, mysterious history. The original owners of the house never lived in it; they vanished on their wedding day. Iris has lived in the house for ages, and as Lily continues to live there, she begins to suspect that at least one of Iris’s books may have been relayed to her by a ghost that resides in the house.

I am the Pretty Thing (yes, I’m shortening the title) works on the conceit that we know Lily isn’t going to make it to the end alive. This isn’t a spoiler; she tells us in the film’s opening that she is 28 and will not live to see 29. Because of this, the story becomes one of not “what will happen,” but “how will we get to the end.” To get us there, the film moves us slowly toward increasing creepiness.

This makes sense based on the story the movie wants to tell. Lily is shown to us as a character who has an extremely low tolerance for fear. Sure, she is a nurse and thus should be able to handle some physical nastiness, but she is also very much the sort of person who doesn’t show up in haunted house stories. She’s not trapped in the house and she is clearly someone who would leave the second things got too scary for her to handle. Since she can’t seem to get through Iris’s books, that threshold is pretty low.

Instead, we get a slow burn as things get just a touch stranger and more disturbing as the story unfolds. Specifically, we learn about the heroine of the book “The Lady in the Walls.” Lily discovers that the book’s protagonist Polly (Lucy Boynton) is the woman who disappeared on her wedding day more than a century before. Was Iris in touch with her spirit? A sudden growth of mold in the house—does that reveal where Polly was entombed? And is this why our receding-into-dementia Iris is so insistent on referring to Lily as Polly?

Since we know Lily won’t survive the film, the answers to these questions are pretty evident. Again, the real question is how we’re going to get there.

For a slow burn like this to work, we need to be at best marginally involved in the characters. Sadly, this is one of the places where I am the Pretty Thing drops the ball. I find it hard to be genuinely concerned with Lily as a character. A little of this comes from the knowledge that she’s not going to see the end credits. Much more of it comes from the fact that she’s simply not very interesting as a person. She’s bland, almost provincial, and the dreamy voiceovers don’t much help. I understand why those voiceovers seem to come from a haze of barbiturates, but that doesn’t help to make her interesting.

The little moments of things just being off are what really work here. At one point, Lily sits at a table talking on the phone, not noticing that one of the chairs is suspended from the ceiling. Moments later, the phone is ripped out of her hand. The rug at the bottom of the stairs frequently has a corner turned up as if someone has tripped on it despite Lily being the only one who walks there. These are little touches that aren’t scary, but create a sense of being off and strange.

Ultimately, I am the Pretty Thing is an experiment that is only partially successful. The atmosphere is well created and maintained, and this really is the main intent of the film. It aims to build something just off-kilter, just strange enough to keep us on edge. In aiming for genuine terror, it achieves a strong sense of unease. Give me characters worth caring about, and it’s a home run.

Why to watch I am the Pretty Thing that Lives in the House: An example of creating atmosphere over cheap scares.
Why not to watch: Bland characters.

Posted by SJHoneywell at 8:54 AM

Email ThisBlogThis!Share to TwitterShare to FacebookShare to Pinterest
Labels: horror, I am the Pretty Thing that Lives in the House, Oz Perkins