Where There's a Will, I Want to Be in it 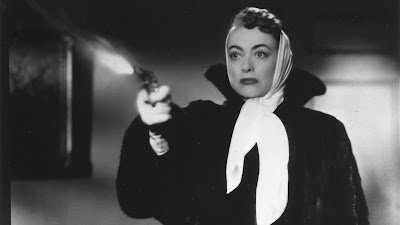 NetFlix is a lot like an umpire or autocorrect. When it does its job well, you don’t notice it. It’s only when it screws up that we really pay attention to it. Umpires, autocorrect and NetFlix all take more crap than they should because of that. What this means is that yes, I have a complaint about NetFlix. Sudden Fear has disappeared from its available discs. What this means is that I looked for it online and found it at DailyMotion. I appreciate it being there; I didn’t appreciate the ads every five minutes for much of the running time.

Sudden Fear feels like a movie I should have seen years ago. It’s a film noir, and I love film noir. It’s also a damn good film noir. It’s stylish and slick, and while there are certainly elements like a good femme fatale, this is very much a “woman in danger” film. In fact, since our main character is being threatened with death over the contents of her will, it’s entirely about her being in danger and finding a way to survive it.

Myra Hudson (Joan Crawford) is a successful playwright, arguably the most successful playwright around. Her latest play is geared to be a success, but she’s not keen on the casting. Specifically, she’s not that keen on her leading man, Lester Blaine (Jack Palance). Myra has the sort of pull to get an actor off the stage, and so Lester finds himself out of a job. Shortly after this, Myra and Lester find themselves both on a train heading out of New York. Lester’s ticket is through to Chicago while Myra is headed all the way to San Francisco. But the two seem to be hitting it off, and Lester arranges to travel all the way to the coast.

Shortly after this trip, Myra and Lester are married. And shortly after this event, Myra is introduced to Irene Neves (Gloria Grahame), who has herself just arrived in San Francisco. Her arrival is a lot less innocent than it might seem, and Irene doesn’t need to be introduced to Lester; the two are old flames, and it’s soon clear that the fire isn’t quite out. Lester finds himself chafing as more or less a kept man (in truth—Myra makes the money and is also a good decade older than him). And then he discovers that Myra is planning on changing her will so that most of her money goes to a foundation. Feeling trapped and desperate, Lester and Irene decide to kill Myra before her new will goes into effect. It’s on a short timeline, but if they can manage it, Lester will get most of her considerable fortune.

What makes Sudden Fear work is that moment of, well, sudden fear. This is when Myra finds out about the plan against her life. Myra has a dictating system that allows her to walk around her spacious office and just talk; there are microphones around the room. In this case, the microphones have picked up the conspiratorial whispers of Lester and Irene. Terrified but not wanting to give in, Myra decides that her best plan is to kill Lester and frame Irene, getting both of them out of her life and saving herself at the same time.

What makes Sudden Fear interesting to me is not the “woman in danger” plot, although the plot is a good one. It’s not the idea that the woman in danger is Joan Crawford, who was always interesting when she was the woman that was being put in peril. It’s not even Jack Palance, who demonstrated that even at this early point in his career when he was rail-thin and made of at least 80% cheekbones he could be a hugely malevolent presence on screen. No, it’s the fact that Sudden Fear is different from the typical noir in one very specific way: it feels like it’s got a pedigree of class and decorum.

A lot of films noir revel in their dirtiness. The characters are all criminals or broken people. That’s not the case with Sudden Fear, even if the characters are broken in certain ways. But these aren’t criminals (okay, they are, but they aren’t career criminals). These are people used to living with money and luxury and what we’re essentially told is that they are just as nasty and venal and awful as the typical noir denizens.

I like the cast here a lot. Joan Crawford is always interesting when she is in this sort role. Crawford, for whatever reason, is magnetic when her life is being threatened in one way or another. When she is in direct danger, there is something about her that makes her seem additionally vulnerable to what is about to happen. I’m not sure why that is. I can’t call myself a huge Jack Palance fan, but he has a presence here. Toss in Gloria Grahame and Mike “Touch” Connors in his first role and before he was Mannix, and it’s a hard combination to resist.

It does get a little coincidental at the end with how things work out, but I’m willing to deal with it.

Why to watch Sudden Fear: Joan Crawford in film noir? Sign me up.
Why not to watch: No good reason unless you just hate noir.