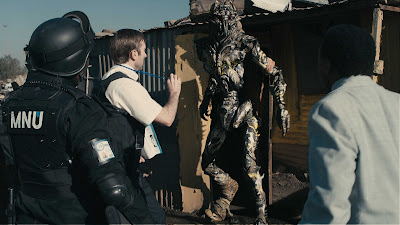 Great movies are about much more than the story they show. This is especially true of good science fiction. Truly great science fiction is never really about aliens, laser guns, and robots. District 9, for instance, is about Apartheid. The fact that it takes place around Johannesburg only makes it Apartheid specifically rather than simply racism. So there’s a story, and then there’s the meaning behind the story.

Typically in science fiction stories, alien races are as advanced as we are, or far more technologically advanced than we are. This is not the case here. The film starts a number of years after a significant event—the appearance of a giant alien spacecraft above Johannesburg, South Africa. Nothing happens for some time, and eventually the humans break in to the craft to discover what the aliens want. What they discover is a race of aliens on the edge of starvation, filthy, and leaderless.

The humans create a shantytown for the creatures, which are nicknamed “prawns” because of their similarity to shrimp. The creatures live a miserable existence, picking through garbage to live, and happily oppressed by humanity. The camp of the prawns is called District 9 (hence the name of the film). There is frequent unrest between the humans and the aliens, and a lot of resentment on both sides.

Eventually, the humans have had enough of the prawns, and the South African government hires a company called Multinational United to deal with them. MNU is essentially a for-hire military, and is not merely watching over District 9 but exploiting it as much as possible. The aliens are kept in terrible poverty, and their technology is stolen at every opportunity. Unfortunately for the humans and for MNU, humans can’t use the alien technology; it’s tied to the alien DNA. However, MNU still wants it to see if they can make it work. They build a new place for the prawns called District 10 and set about evicting them. Placed in charge of the eviction is Wikus Van de Merwe (Sharlto Copley).

Y’know what? I’m not going to go much further into the plot. Suffice it to say that an alien named Christopher Johnson (Jason Cope, and yes, the aliens all have human names) is trying to get the aliens back up to the mothership and Van de Merwe interferes with some pretty disastrous results. All of this happens early, and the reveal of the extent of Van de Merwe’s problem is so good and so much fun that it’s not worth spoiling, even under a spoiler tag.

There are a lot of things that really work in this film, not the least of which is the method in which it was filmed. The film, as it plays, is a combination of a variety of video styles, all of them effective to heighten both the tension and the realism of the story on the screen. Almost everything appears filmed with video cameras. A great deal of what we see is actually surveillance footage of different parts of the MNU facilities and the alien shantytown. All of this has the effect of making this look like real footage of real events. There’s a visceral feel to everything happening on screen that makes gives the film a real edge of legitimacy it wouldn’t have as a polished piece of cinema.

This is great stuff. In addition to the direct video feel, this film is dirty. The aliens themselves, their shantytown, the way they live is disturbing and horrible. Equally horrible are the alien weapons in use. There’s plenty of spatter and splatter when the guns go off, and this is horrifically real as well, the sort of thing that nightmares are made of. Director Neill Blomkamp has opted to give us not the sort of clean weaponry we are used to in many similar films, but weapons that turn whatever they hit into exploded parts.

Just as effective is the fact that a great deal of the film is done in traditional South African languages like Xhosa and Zulu, and this is left untranslated. We get translations of the alien speech, but not the rest, leaving us as in the dark as to what is being said for much of the film, just as the aliens and Van de Merwe are.

If there’s a flaw here, it’s that perhaps the ultimate meaning of the film is perhaps too obviously about the Apartheid system. Most of this comes in the character of Koobus Venter (David James), who likes nothing more than destroying every alien he comes across. And yet, it doesn’t really matter in the long run that it’s as subtle as a mallet to the head, because it’s really compelling and well made.

For what gives the impression of little more than a science fiction romp, District 9 is surprisingly deep and a surprisingly difficult watch. Wikus Ven de Merwe goes from villain to hero in part because of what happens to him and in part because of his actions, but also because he is the only human character worth rooting for. Koobus is an awful creature, and just as terrible is Obesandjo (Eugene Khumbanyiwa), who eats parts of the aliens in the hopes of gaining their power. It’s details like this, which have roots in the beliefs of many South African people, that take this film beyond the level of science fiction/action/thriller and into the realm of real cinema.

Why to watch District 9: It’s a science fiction story grittier than anything you’ve seen.
Why not to watch: It’s more disturbing than you think.
Posted by SJHoneywell at 11:56 PM