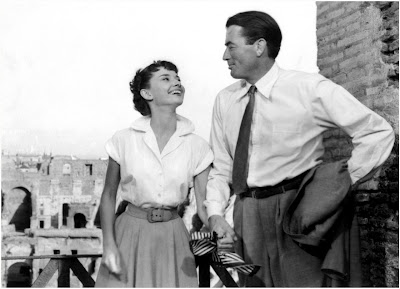 All actors start somewhere. Those who end up having a career get lucky at some point and are in something that hits. Those who become legendary have the same luck, but prove that some of that luck was created by them in the first place. Audrey Hepburn is one of those legendary performers, and she started in Roman Holiday. I consider myself a fan of Audrey Hepburn, so I was very interested in seeing this, her first major role, and the film that earned her an Oscar.

The story is a pretty simple one. Princess Ann (Hepburn), who is from an unspecified European country, is currently on a tour around Europe to boost trade and good will. However, she is bored by the tasks put in front of her and intensely frustrated. Upset, she’s given a sedative, but when she is left on her own, she runs off into the streets of Rome where she is picked up by Joe Bradley (Gregory Peck), a reporter working for a news service in Rome. Joe doesn’t recognize her at first, and believes her to be drunk because of the sedative. He takes her back to his place and puts her up for the night.

He discovers who she is in the morning and calls in his photographer friend Irving Radovich (Eddie Albert) to help him. He gets his editor to agree to a huge price for an exclusive story on the princess on what is essentially her first day off in her life. While she goes off on her own at first and gets a severe haircut (that looks better on her than her long hair, incidentally), Joe makes plans, then meets up with her again and takes her around the city while Irving hangs out incognito and snaps photos of their day. And as will surprise no one, the pair falls hard for each other by the end of the day, a scene made poignant when both realize that they live in very different worlds. All of this leads to the inevitable concluding scene.

Roman Holiday is in many ways the template for the typical romantic comedy. It has all of the earmarks of romantic comedies that are still being made today—an extremely privileged woman has everything she wants except for the one thing she really wants, and that comes from an unexpected place. The pair meets cute and has wacky adventures together—in this case involving a scooter ride through Rome and Ann trying her first cigarette—before they decide at the end that they really want to be together. While the career of princess is perhaps a bit less common these days, women in romantic comedies still tend to have these sorts of dream careers (book editor, museum curator, high-profile author, etc.). And the guy tends to be ultimately decent despite being a little dangerous or potentially deceitful at the start.

There are some very cute scenes. At the Mouth of Truth, for instance. Tradition states that if a liar puts his or her hand in the mouth, it will bite the hand off. Joe places his hand in the mouth, gives a scream, and then pulls out his sleeve with his hand missing, only to reveal it tucked up his sleeve. According to legend, Audrey Hepburn didn’t know Peck was going to pull that stunt, and her scream reaction is a genuine one. Just as cute are the pratfalls taken by Irving when Joe is trying to clue him in on the identity of Princess Ann. These are sweet moments of real joy, because they come across as actual instead of overly “film-y” or forced.

What romantic comedies seem to have forgotten is that what’s important is not that the characters fall for each other eventually, or even that opposites attract, at least on film. What’s important is that we as the audience care for these people and want the same things they do. I dislike most characters in modern rom-coms because they are shallow, stupid, snotty, selfish, and other words that probably start with “s.” In a well-made romantic comedy like this one, I want the characters to end up happily because I like them and have grown to care for them. That’s the success of this film more than anything else.

Why to watch Roman Holiday: Because it’s the start of Audrey Hepburn’s career.
Why not to watch: The ending is the right one, but you might not like it.
Posted by SJHoneywell at 11:46 PM